Point made: No. 12 Oregon gets validation plan is working 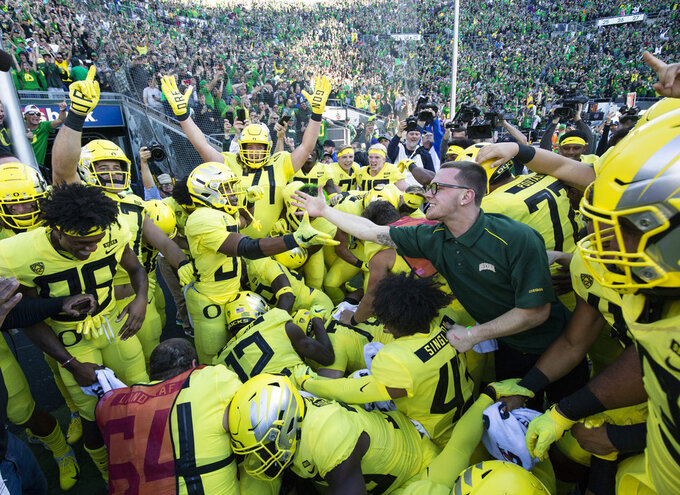 Oregon running back CJ Verdell (34), reaches out to an unidentified fan after scoring the winning touchdown in overtime to beat Washington 30-27 in an NCAA college football game in Eugene, Ore., Saturday, Oct. 13, 2018. (AP Photo/Thomas Boyd)

EUGENE, Ore. (AP) — Mario Cristobal knew he could talk about all the ways he wanted to remodel Oregon and get the Ducks back into being an elite program.

"All the credit, every single ounce of it to the players in that locker room for just buying into a process that back in January it's very different when you go to a blueprint like we did and it's very hard and it's very demanding," Cristobal said. "But I think when you have moments like this it validates all that stuff and more so."

Oregon's validation came Saturday when it outlasted rival Washington for a 30-27 overtime victory that ended two years of misery against the Ducks' neighbors to the north. C.J. Verdell's 6-yard run for the winning TD set off the kind of celebration that was absent from Autzen Stadium in recent years when the Ducks swooned to being just another team in in the Pac-12 North, rather than a perennial championship favorite.

"I've been here for a lot of games and I think that's probably one of the best experiences I've ever been a part of," Oregon quarterback Justin Herbert said. "For us to fight back like that and just not lose focus was unreal. It was great to celebrate with these guys."

Oregon thought it was going to have this moment a few weeks ago when it was on the cusp of knocking off Stanford before a second-half collapse led to a 38-31 overtime loss. It was the kind of loss that could have derailed what Cristobal is trying to develop and have a lingering effect.

Instead, the Ducks appear to have learned from the miscues of that night against the Cardinal. Yes, they were fortunate to get to overtime after Washington got questionably conservative in the final minute and kicker Peyton Henry was wide right with a 37-yard attempt on the final play of regulation.

But when it got to overtime and Washington was held to a field goal on its possession, the Ducks weren't about to let the game continue. Cristobal said that even if Verdell had been stopped on the third-and-goal run, the Ducks likely would have gone for it on fourth down.

It's an attitude Cristobal wants the Ducks to have and differs from Oregon teams of the past, especially recent seasons.

"I feel our culture has entirely changed, we get better and better, our attitude has improved so much and it's showing up," defensive lineman Jalen Jelks said.

The Ducks are at the top of currently crowded Pac-12 North, but the road in getting to the conference championship game is filled with potential bumps. The first comes next weekend when the Ducks travel to Washington State for what will be an amped atmosphere with ESPN's "College GameDay" visiting the Pullman campus for the first time. And that goes without mentioned the Cougars are 5-1 with their only loss a three-point setback at Southern California.

Also waiting in the distance is a November game at Utah.

"That's what coach Cristobal addressed after the game. He came up and mentioned we have a great opportunity next week and not sit on this one," Herbert said. "We'll definitely celebrate this but it's a great win and we're looking forward to next week."