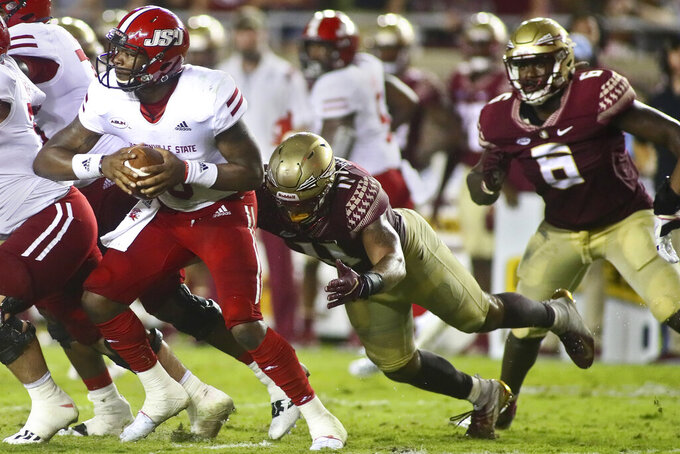 Jermaine Johnson bet on himself when he decided to transfer from Georgia to Florida State.

Johnson was leaving behind a College Football Playoff contender for a school where he would likely earn more playing time and improve his pro stock.

The first couple of weeks of the season have shown what Johnson gave up while also revealing what the senior defensive end may have gained.

Georgia is ranked second in the AP Top 25, while Florida State is winless. But Johnson has 6 1/2 tackles for loss to top all Bowl Subdivision players and 4 ½ sacks to tie for the FBS lead heading into the Seminoles' game Saturday at Wake Forest.

“He plays super hard,” Florida State defensive ends coach John Papuchis said. “Anybody who’s watched him play over these last couple of games has seen the effort and energy he brings.”

That energy was particularly evident when Florida State opened the season with a 41-38 overtime loss to Notre Dame, which was ranked ninth at the time. Johnson had seven tackles, 2 ½ tackles for loss and 1 ½ sacks.

He followed that up by collecting 11 tackles, four tackles for loss and three sacks against Jacksonville State. No Atlantic Coast Conference player had put up those types of numbers in each of those three categories in the same game since 2011.

Florida State’s roster lists Johnson as 6-foot-5 and 262 pounds. He has 18 overall tackles to go along with his 6 ½ tackles for loss and 4 ½ sacks. He played seven games for Georgia last season and had 16 tackles and five sacks. Johnson collected 20 tackles and 2 ½ sacks for Georgia in 2019.

Johnson’s performance against Notre Dame helped him make a name for himself, but he started to catch the eye of Reese’s Senior Bowl executive director and former NFL scout Jim Nagy a year earlier in Georgia's 41-24 loss to eventual national champion Alabama. Johnson made an impression by collecting four tackles and a sack in a game stockpiled with NFL talent.

“He played a significant amount of snaps in that game,” Nagy recalled. “Just the physicality he plays with at the point of attack stood out that night.”

“Last year at Georgia, being a spot player, he was more what scouts refer to as a flash guy,” Nagy said. “He made plays in flashes and then he’d be off the field. Now he’s in a more prominent role. He’ll be playing a lot more snaps. It was good for him, having that first game against Notre Dame, on a nationally televised big stage, having all the eyes of America on him, and really showed up early in that game, being disruptive, making plays behind the line of scrimmage.”

Nagy doesn’t necessarily see him as a pass-rush specialist and perhaps more of a “runs-downs guy.”

“He’s really physical at the point of attack," Nagy said. "He refuses to stay blocked. Even if he’s getting engaged, he’s just a combative guy, so he fights off blocks and chases.”

He currently fits in as a likely mid-round pick, though this season could help Johnson raise his draft stock because of the additional opportunities he will get. Before the season, ESPN analyst Mel Kiper Jr. ranked draft-eligible prospects by position and had Johnson tied for 10th among defensive ends.