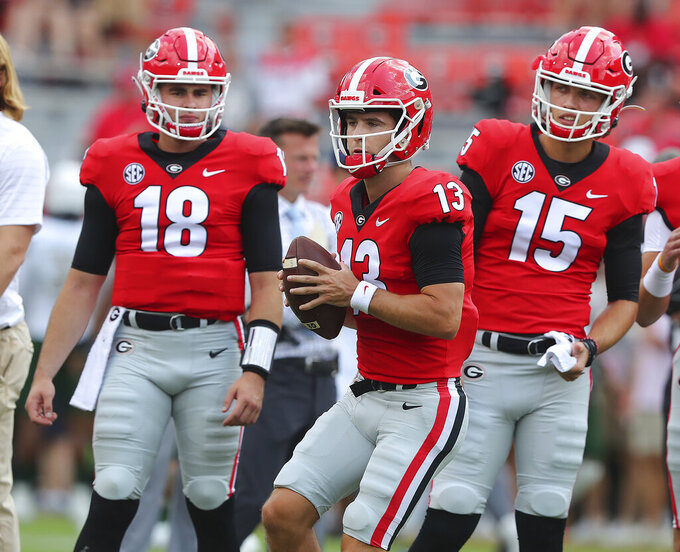 ATLANTA (AP) — JT Daniels has certainly done nothing to lose his job as No. 2 Georgia's starting quarterback.

He led the Bulldogs to five straight wins after taking over as the No. 1 signal-caller. Surely, he'll be taking snaps as soon as he's healthy.

Then again, when your back-up throws five touchdown passes in a single half, tying the school record and sharing honors as the Southeastern Conference offensive player of the week, there's bound to be some talk of a possible quarterback controversy.

The Bulldogs (2-0) returned to practice Monday to begin preparations for a prime-time Southeastern Conference game against South Carolina (2-0).

Naturally, coach Kirby Smart was asked about the status of Daniels, who didn't play in last Saturday's 56-7 rout of UAB because of an oblique injury.

“He has certainty improved," Smart said, citing a report from the school's medical director, Ron Courson. “I will know a little more after practice today in terms of his mobility and his ability to move around and throw the ball.”

With Daniels in uniform but watching from the sideline, Stetson Bennett turned in a near-perfect performance against UAB. He completed 10 of 12 for 288 yards, with three of his scoring throws going for more than 60 yards.

Bennett also had Georgia's longest run of the day on a 20-yard scramble, setting up another TD. In all, he guided Georgia to six touchdowns in seven possessions before calling it a day with a passer rating 422.4 and the Bulldogs leading 42-0.

The SEC honored Bennett's performance by picking him as co-offensive player of the week along with Kentucky running back Chris Rodriguez.

Bennett, a former walk-on who has made six career starts, declined to get into any speculation about whether he deserves more playing time even when Daniels is healthy.

“I was wondering when that was gonna come up,” he quipped. “I can't answer that. Whoever is the guy, we're all ready. All of us. Everybody on the team has confidence with everybody in the quarterback room. We're all good friends. We all prepare the same way.”

Daniels is certainly a viewed as the most talented quarterback in the room, a five-star recruit coming out of high school who initially started at Southern Cal before sustaining a serious knee injury, losing his job and transferring to Georgia.

A bit undersized at 5-foot-11, Bennett walked on at Georgia when he didn't receive a scholarship offer out of high school, hoping to impress the coaches in person. But it quickly became apparent that Bennett had little chance of earning playing time, so he transferred to a junior college the next year.

He was all set to take a scholarship from Sun Belt Conference school Louisiana when Georgia, suddenly in desperate need of quarterback depth after Justin Fields transferred to Ohio State , came calling with an offer of their own.

Bennett returned to the Bulldogs two years ago and wound up starting five games in the pandemic-shorted 2020 season.

After losses to Alabama and Florida ended Georgia's SEC championship hopes, and with Daniels' knee injured fully healed, the Bulldogs turned to him for the final four games of the season.

Daniels guided the Bulldogs to a 4-0 mark, including a last-second triumph over Cincinnati in the Peach Bowl.

There were no questions about the starter coming into this season, and Smart even indicated that Bennett had dropped to No. 3 on the depth chart behind redshirt freshman Carson Beck.

Georgia knocked off Clemson 10-3 in its opening game, but the Daniels-led offense never reached the end zone and his oblique began to bother him. The only touchdown of the game came on a 74-yard interception return.

Daniels completed 22 of 30 but produced only 135 yards passing with an interception.

Bennett dwarfed those numbers in his start, but of course he was facing a far less imposing team than Clemson, which came into this season ranked No. 3.

Smart said the quarterback position is no different than any other on the team.

No one is assured of a starting job.

“It's the same as the defensive back room, the wide receiver room, and all the other rooms,” Smart said. “You go out and compete each day. I don't see it any different for the quarterbacks."

Still, it's a far cry from last season, when the Bulldogs struggled to settle on a starting quarterback before Daniels locked down the job late in the year.

He'll continues to rehab the oblique injury, and from all indications will again be the starter when he's healthy.

But there's certainly no need to rush Daniels back for Saturday night's game against South Carolina.

Not after the way Bennett played last weekend.

“The approach is rest, recovery and treatment," Smart said. “The biggest thing that we’ve been told is that you don’t want to aggravate it.”