South Florida eyes opportunity against No. 25 BYU in opener 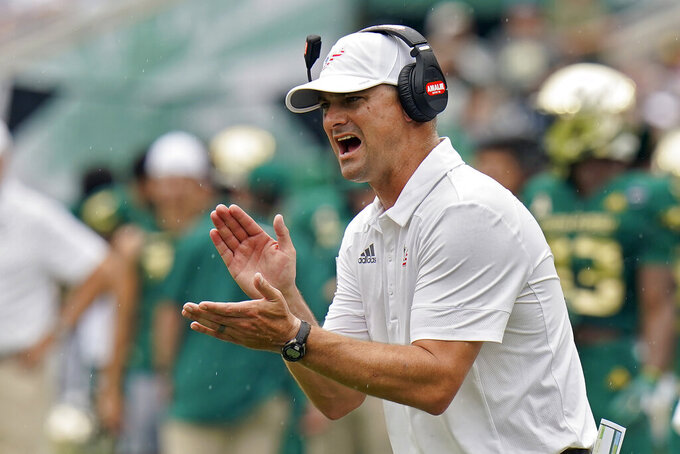 TAMPA, Fla. (AP) — Jeff Scott looks at South Florida’s season opener against No. 25 BYU as an opportunity for his team to set the tone for a promising future.

The Bulls this season face two Power Five opponents, as well as BYU and three other programs that will move to the Big 12 next year. Their challenge is to make the most of those chances so they can strengthen their case for inclusion in future discussions about major conference realignment.

“I think kind of the word that I’ve been using with our team is we’re going to have several opportunities this year for those breakthrough moments for our program to take that next step,” Scott said. “We’ve got to be able to go out and have success against good teams like BYU.”

In addition to hosting BYU and Cougars quarterback Jaren Hall on Saturday night, the Bulls face Power Five opponents Florida and Louisville on the road this month.

Cincinnati, Houston and Central Florida — three American Athletic Conference rivals that will join BYU in moving to the Big 12 — also are part of the difficult schedule that will gauge USF’s progress under Scott.

“We want to make sure that when people look at the landscape of college football, the next time there’s a chance for realignment, we want them to look at South Florida and say: ‘Hey, those guys can compete. Those guys deserve to move up,' " Scott said. “There’s a lot of factors that go into that, but probably the No. 1 factor is your winning on the field.”

BYU is beginning its final season as an independent. The Cougars are coming off a 10-3 season and No. 19 ranking in the final poll. They are ranked in the preseason poll for the first time since 2009.

“This is probably one of the best teams they’ve had in the past five or six years,” Scott said.

Hall, who threw for 2,583 yards and 20 touchdowns against five interceptions in 10 games last season, is not a total stranger to USF. He made his first career start against the Bulls three years ago. Hall didn’t play against USF last season because of injury.

BYU coach Kalani Sitake said the Cougars have to be prepared to make adjustments, noting USF has new coordinators on both offense and defense.

“We don’t know much about what they do on offense or defense with the new coordinators that they have,” Sitake said. “So we will have to be ready for everything, and we’re preparing that way. That happens sometimes in season openers.”

Hall noted BYU also had limited knowledge of what to expect defensively from its 2021 opening opponent, Arizona, which the Cougars defeated 24-16 in Las Vegas.

“We didn’t get what we expected, and that could be the case again this year," Hall said. "We just have to have the mental fortitude to see what’s going to happen, accept it if it’s different, make adjustments at halftime and go play ball.

"At the end of the day,” the quarterback added, “you have to execute your basic plays better than they do.”