Spartans to be big challenge for Huskers' prolific offense 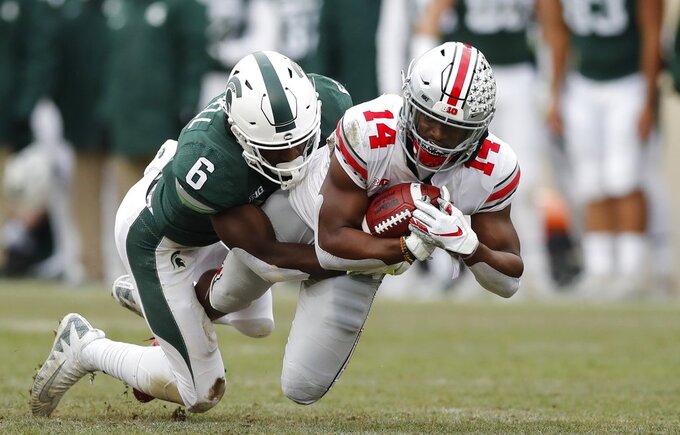 LINCOLN, Neb. (AP) — Nebraska's offense has generated more than 450 yards in seven straight games, something not even the powerhouse Tom Osborne teams of the 1990s did.

If the Cornhuskers put up the same numbers Saturday against Michigan State's stout defense, it will be another sign first-year coach Scott Frost's up-tempo spread option is a force in the Big Ten just as it was when he was at Central Florida in the American Athletic Conference.

"I've said this a bunch, but this team could've gone a hundred different directions when we were struggling early on and getting bad breaks and losing games," Frost said. "It couldn't have started any worse and this team held together and got better through that, and now we're dangerous. We are a team that can beat just about anybody in this league. We have to play well to have a chance, but we're a dangerous team."

The Huskers (3-7, 2-5 Big Ten) have beaten Minnesota, Bethune-Cookman of the Football Championship Subdivision and Illinois in their last four games, and they had no trouble moving the ball against Ohio State in a loss.

Michigan State (6-4, 4-3) will be another chance to measure how far Nebraska's offense has come since it got stopped cold at Michigan nearly two months ago. The Spartans allow fewer than 20 points per game, lead the nation in rushing defense and are 21st overall.

"This is close to or as good as the best defenses we've faced all year," Frost said. "They know their schemes and they know their issues, places that people try to hit them, and they have answers for that. Best thing about them, they get 11 guys playing hard and sprinting to the football, they don't give up big plays."

Nebraska's defense under coordinator Erik Chinander will be in the spotlight as Frost heads into year two. The Huskers rank no better than 12th in the Big Ten in any of the major statistical categories, allowing 34 points and 449 yards per game.

"The most important thing to me is that our football team remains intact from a chemistry standpoint, which it will," Dantonio said, "and we will bring great energy to the game on Saturday against Nebraska."

The last time Michigan State visited Lincoln, in 2015, the Spartans were ranked No. 6 and Tommy Armstrong Jr. drove Nebraska 91 yards in the final minute for a 39-38 win. MSU fans still mutter about the ending. Brandon Reilly stepped out of bounds and came back in to make the catch on the winning 30-yard touchdown. Officials ruled it was legal because cornerback Jermaine Edmondson forced Reilly out. The play withstood a video review.

It was the Spartans' only loss before they were beaten by Alabama in a College Football Playoff semifinal.

Michigan State's offense has been known for its balance under Dantonio, but consistency running the ball has been a struggle since LJ Scott went out with injury in September. The Spartans are averaging 118 yards a game on the ground, ranking 13th in the Big Ten, and they ran only 18 times in last week's loss to Ohio State, their fewest number of attempts since 2006.

Nebraska will honor 19 seniors before the game. The group includes 12 fifth-year seniors who have had three head coaches (Bo Pelini, Mike Riley and Frost).

This will be the first game between the teams since former punters Sam Foltz of Nebraska and Mike Sadler of Michigan State died in a car accident in July 2016 while both were in Wisconsin to work at a kicking camp.

Frost and Dantonio will meet at midfield with the parents of Foltz and Sadler and the specialists of both teams. The coaches will make a presentation. The coin flip will include the Foltz-Sadler coin used by the Big Ten during the 2016 season.

Nebraska has scored touchdowns on its opening possession in six straight games, with all the drives covering at least 65 yards.

"Watching tape," Frost said, "I see people punting nine straight times against this outfit. If we can score on our first drive this week, I'll be really happy."