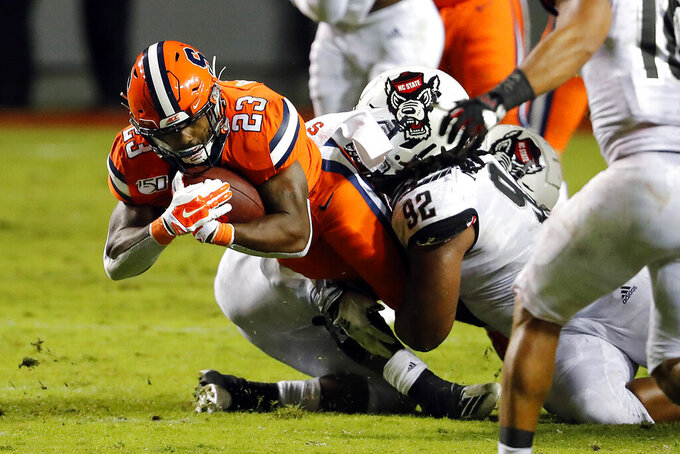 Syracuse's Abdul Adams (23) stretches for additional yards in the grasp of North Carolina State's Larrell Murchison (92) during the second half of an NCAA college football game in Raleigh, N.C., Thursday, Oct. 10, 2019. (AP Photo/Karl B DeBlaker)

SYRACUSE, N.Y. (AP) — It's not necessarily a make-or-break moment for Syracuse, but when longtime rival Pittsburgh visits on Friday night there will be plenty at stake for the Orange.

Winless after two games in the Atlantic Coast Conference, Syracuse (3-3) needs a victory to start the second half of the season on the right foot with three road games ahead.

Pittsburgh (4-2, 1-1 ACC) is riding a three-game winning streak and is coming off a bye week. Syracuse lost 16-10 at North Carolina State eight days ago, failing to score a touchdown for the first 57 minutes but still within reach at the final horn.

The Orange have lost only once in their last nine games in the Carrier Dome, 41-6 to then-No. 1 Clemson in this year's home opener last month.

Other things to know when Pittsburgh visits Syracuse on Friday night:

Pitt's pass rush is thriving even without injured defensive linemen Rashad Weaver and Keyshon Camp, and that's not good news for the Orange's injury-plagued offense, which has allowed 26 sacks of quarterback Tommy DeVito, most in the ACC. The Panthers are tied with Virginia at the top of the conference with 27 sacks.

Sophomore Jaylen Twyman, thrust into a starting role after Weaver went down during training camp, leads Pitt with six sacks and this week was added to the watch list for the Chuck Bednarik Award, given annually to the best defensive lineman in the country. The last Panther to win the award? Los Angeles Rams star Aaron Donald, the number Twyman chose when he joined Pitt.

Syracuse WR Trishton Jackson has six receptions of 30-plus yards, tied with Clemson's Tee Higgins for the most in the ACC, and three went for touchdowns — 52 yards against Maryland, and 46 and 59 against Western Michigan. Pitt's duo of senior Maurice Ffrench (50) and junior Taysir Mack (41) have the most receptions of any Bowl Subdivision receiving tandem. When reminded that Syracuse ranks 111th in pass defense, Ffrench flashed a big smile.

"We're all making plays," he said, declining to elaborate.

The Panthers will be without safety Paris Ford for the first half after Ford was ejected for targeting in Pitt's victory over Duke on Oct. 6. Jazzee Stocker and Bricen Garner will get first crack at filling in. Ford has been a difference-maker on the back end for the Panthers. The sophomore leads the team with 45 tackles and two interceptions.

The Panthers and the Orange have met every season since 1955, even as the two schools have bounced from the Big East to the ACC. Narduzzi is 3-1 against Syracuse in four meetings. Three of the four games have been decided by a touchdown or less. The one "blowout" in the bunch wasn't actually one at all, but Pitt's wild 76-71 victory at Heinz Field in 2016. The final game of Babers' first season as head coach marked the highest scoring regulation game in FBS history. The Panthers rallied for a 44-37 overtime victory over the Orange last fall.

"It's funny how you remember just about every game," Narduzzi said.

Added Babers: "I can remember every game that we played against those guys and it's just interesting that ... it doesn't matter what the record is, it's normally one heck of a football game. And normally, it's close."

The game will feature two of the most penalized teams in the country. Syracuse, which was called for 12 penalties in the loss to the Wolfpack, is tied for 126th, averaging 9.17 penalties per game. Pitt is 124th, averaging 8.83.

"I don't like where our discipline is," Narduzzi said. "Really, Syracuse had the same problem. We've got to correct that. It's hard to win on the road ... when you don't do those little things well in all three phases."