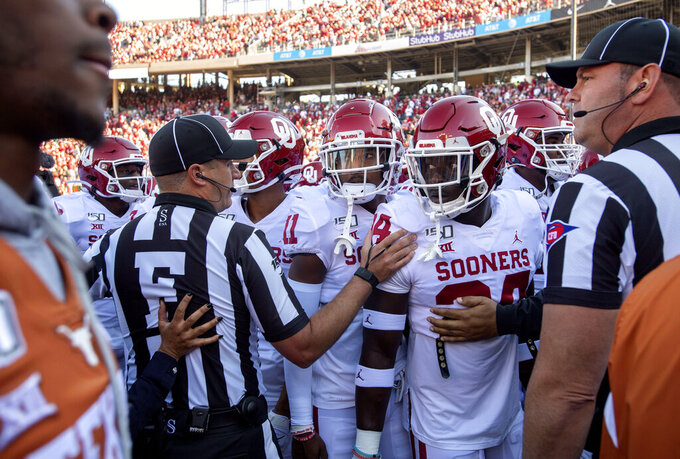 Referees keep Oklahoma players from interacting with Texas players as they leave the field after pregame warmups before an NCAA college football game at the Cotton Bowl, Saturday, Oct. 12, 2019, in Dallas. Oklahoma won 34-27. (AP Photo/Jeffrey McWhorter)

DALLAS (AP) — The clusters of players for No. 6 Oklahoma and 11th-ranked Texas were getting closer at midfield 30 minutes before the annual Red River rivalry, and officials were already trying to separate them when a few got too close and started jawing at each other.

Referee Mike Defee flung his flag high in the air and announced penalties on every player for unsportsmanlike conduct. Defee was just getting started with his warning that any subsequent unsportsmanlike calls would mean an immediate ejection.

During the pregame coin toss, Defee launched into a lecture to the captains about how the 115th meeting of these heated rivals was one of the best games in college football, and said: "We're going to play this game with sportsmanship. Am I clear?"

The teams played twice last season, with Texas winning the Cotton Bowl Stadium game in the middle of the Texas state fair, while Oklahoma took the rematch in the Big 12 championship last December.

Defee said there also was shoving during Saturday's incident, saying he and head linesman Al Green were hit.

After the flag was thrown, the teams ran to the same tunnel together. There weren't any noticeable scuffles as OU players bunched up near the entrance while the Longhorns went single file right by them on the way up the ramp.

"It's a tough situation," Defee said. "This is a great venue. The problem is that you've got two teams that come out very close to one another. The timing of that is problematic."

Defee said officials have jurisdiction over the game starting one hour before kickoff, and that it was the first time he has called a penalty before a game. He said the lecture for the captains was a result of his "disappointment."

"At the end of the day, I guess disappointment to a certain extent," he said. "What happened out there is an embarrassment to everyone. It shouldn't happen."

Players heeded the warning. The only ejection was Texas defensive lineman Malcolm Roach, and it was for targeting when an unnecessary roughness call against him went to replay review. Roach dived on a helmet-first hit when receiver CeeDee Lamb was on the ground.

Oklahoma coach Lincoln Riley said both teams were punting during warmups and ended up close to each other, and the situation escalated from there. Texas coach Tom Herman said he had to find out who among his players was part of the fracas.

"I didn't see everything that was going on," Herman said. "Certainly it's not something that we condone."

The tunnel is on the south end of the stadium, which is the side with crimson-wearing OU fans. The stands are divided at the 50-yard line, with burnt orange-clad Texas fans on the north side.