Texas Tech, TCU meet with both pushing for bowl eligibility 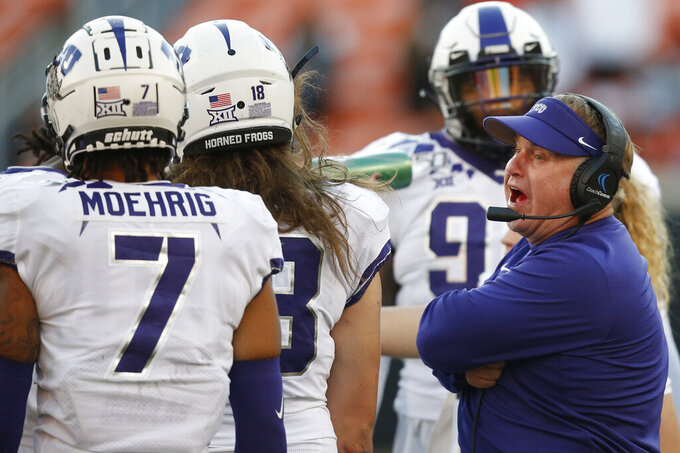 TCU head coach Gary Patterson talks to his team in the second half of an NCAA college football game against Oklahoma State in Stillwater, Okla., Saturday, Nov. 2, 2019. (AP Photo/Sue Ogrocki)

LUBBOCK, Texas (AP) — Texas Tech with its first-year coach and TCU with a true freshman quarterback are in the same situation.

The Red Raiders and Horned Frogs have identical 4-5 records (also 2-4 in the Big 12) with only one win over the last month. Both have to win two of their last three games to get bowl eligible, and since they play each other Saturday, one will have to win its last two games to extend the season.

“Backs against the wall, we know what we're going for,” Texas Tech coach Matt Wells said. “We're going for the same thing TCU is going for — to be bowl eligible. It'll be a tough, hard-fought game.”

The Red Raiders are coming off a win at West Virginia that ended a three-game losing streak.

“Not a lot of people think that we can do what we can do, and as long as we believe in each other and go out and practice with a purpose every day and just do what we know we can do, everything will fall the way that it should,” linebacker Riko Jeffers said.

TCU is coming off a triple-overtime home loss to No. 12 Baylor, the undefeated Big 12 leader. The Horned Frogs have lost four of their last five games. Each of their last three losses has been by a touchdown, and they had a three-point loss to No. 20 SMU early in the season.

“Texas Tech is kind of in the same situation we are,” TCU coach Gary Patterson said. “They’ve kept improving. ... So got to get ready to play and find a way to win.”

Frogs freshman quarterback Max Duggan, with the injured middle finger on his throwing (right) hand heavily taped for protection, completed only 14 of 32 passes for 140 yards against Baylor. He had his second consecutive three-interception game after only one pick his first five starts before that.

“I don’t think the finger had anything to do with it,” Patterson said. “You have to evaluate everything. You played against a good defense that doesn’t allow what people would think what we’re trying to get accomplished.”

Texas Tech quarterbacks Alan Bowman (shoulder) and freshman Maverick McIvor (foot surgery) have both been cleared to play. Bowman was the Big 12’s leading passer when he got hurt in the third game, and he could play in another game this season then still redshirt and be a sophomore again next year.

“It's our intent to redshirt both of them,” Wells said. “They're going to have to start lifting and practicing full speed and all that. ... There's only one guy that can go in, and Jett (Duffey) is playing well right now.”

Wells was an 18-year-old freshman quarterback at Utah State in 1993 when he first met Patterson, the Aggies’ secondary coach from 1992-94.

“Really the last six years as I've been a head coach he's done a lot for me just in terms of helping me as a young head coach,” Wells said. “He hasn't talked to me I don't think in 10 months, but before that I've known him for a long time. Great guy, one of the best coaches in the country.”

After Jalen Reagor had 72 catches for 1,061 yards with touchdowns in seven consecutive games last year, defenses have limited the TCU receiver to 33 catches for 452 yards and four scores this season. Asked about Reagor’s inability to break out again this season, Patterson reminded people of what he said early in the season: “You have to have somebody on the other side.”

WHEN THEY WERE KIDS

“He might hate me for saying this, he was a youth Olympian sprinter, won the 100 meters as like a 9-year-old. Next time I saw him he was 320 pounds,” Bruffy said. “We go back a long way. There's actually a picture of him and I at signing day from our district, arms around each other. Loved going against him.”