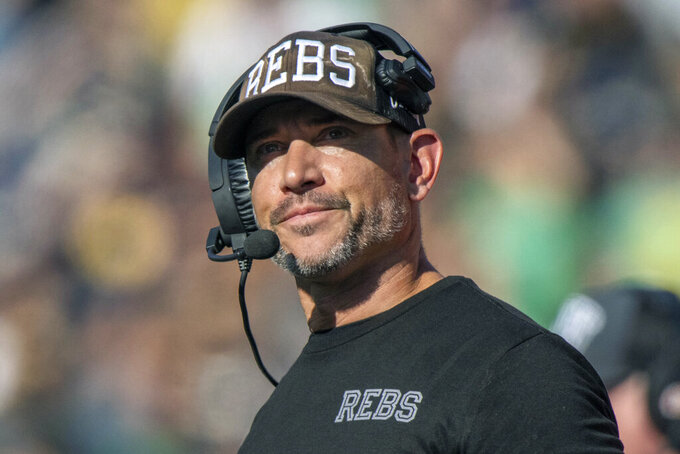 Then the Rebels lost six games in a row to seemingly fall out of bowl contention, and even a victory over their biggest rival Saturday wasn't enough to save Arroyo's job.

Arroyo had two years left on his $7.7 million contract. Harper said Arroyo would be paid a $2.3 million buyout over the remainder of that term. UNLV spokesman Andy Grossman said the money for the buyout would be privately raised.

“Anyone coaching Division I football, Division II, Division III, it does not matter, the ultimate goal is to win and win consistently,” Harper said.

Arroyo did not immediately respond to a request for comment.

Associate head coach and linebackers coach Kenwick Thompson will serve as the interim coach if UNLV, which is 5-7, is invited to a bowl. The Rebels could play in the postseason because there might not be enough six-win teams to fill all the bowl slots.

Harper said he would not use a firm to conduct the search, and that he prefers a candidate with head coaching experience.

“That is a big key to the learning curve,” Harper said.

Such a criteria could make Bryan Harsin an attractive candidate. Harsin was fired in just his second season at Auburn, but he went 69-19 over seven seasons at Mountain West rival Boise State and was ranked in the final AP poll four times.

No matter who follows Arroyo, that coach will be the latest to try to turn around a program that has made just four bowl appearances in its history, the last in the 2013 season at the Heart of Dallas Bowl.

UNLV has undergone consistent turnover because of the lack of success, though Arroyo's three-year tenure ties for the program's shortest since Ron Meyer in 1973-75. Meyer left to become the coach at SMU after going 27-8.

Arroyo was the 12th coach in the history of the program, which dates to 1968.

Harper said UNLV now has something substantial to offer candidates with the $35 million Fertitta Football Complex where the team trains to the $2 billion Allegiant Stadium where it plays.

“There is a lot of interest across the board, and we're going to pick the best person possible for our program,” Harper said.