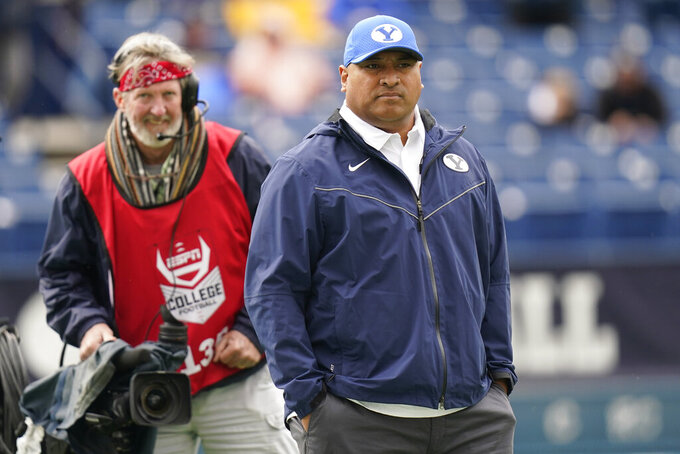 FILE - BYU head coach Kalani Sitake looks on before the start of their NCAA college football game against Boise State in Provo, Utah, in this Saturday, Oct. 9, 2021, file photo. BYU coach Kalani Sitake said he has known Baylor coach Dave Aranda for a long time, and that they have shared a lot of ideas and philosophies about coaching. Baylor and BYU meet in a matchup of 5-1 teams on Saturday, Oct. 16, 2021.(AP Photo/Rick Bowmer, File)

PULLMAN, Wash. (AP) — After months of dealing with uncertainty, Washington State finally has clarity about who will lead the program.

Nick Rolovich and four assistants are gone, fired when they failed to comply with the governor’s mandate that all state employees be vaccinated against the coronavirus. Left in the wake of Monday's dismissals is a team trying to quickly regroup and stay on a roll with Brigham Young visiting on Saturday for a nonconference matchup.

Washington State (4-3) has won three straight Pac-12 games even amid the turmoil created by Rolovich's situation, which began with the former head coach announcing during the summer that he wouldn't be getting vaccinated. The win streak includes last week's impressive comeback victory over Stanford that left Washington State as the only Pac-12 North team with three conference victories.

Now, the remaining coaching staff is trying to turn the players' focus to the task at hand.

“We’re going to give our guys an opportunity to do what they do best. I believe we’re one of the most explosive offenses out there, and they’re playing with great confidence," said Jake Dickert, the defensive coordinator who was elevated to acting head coach. "Defensively, I think our staple is playing hard, playing fast and playing together. Those would be the principles we’ll rely on come Saturday.”

While Washington State should be fine on the defensive side since Dickert is still there to guide the unit, there are questions about how well the offense will function since offensive play caller Craig Stutzmann was among those who were fired.

Quarterback Jayden de Laura, who leads the Pac-12 with 15 touchdown passes, called on fans to pack Martin Stadium in support of the team after such a tumultuous time.

“We are a band of brothers who play and sacrifice for each other, no matter who the head coach is,” de Laura wrote on Twitter. “We have never been about one person or any one name on the back of the jersey. We have been and will always be about the logo and the pride that all of us share in being part of the Cougar family.”

BYU (5-2) fell out of the Top 25 after losing two straight games, including a 38-24 loss last weekend at Baylor, which rushed for 303 yards. But the Cougars are still favored in making their first trip to Pullman, even though BYU is a little beat up after playing seven straight games.

“I will be honest, it has felt like tons of weeks without a bye. I am excited for a bye,” said BYU linebacker Ben Bywater. “I think we are all looking forward to Nov. 13. We love football, obviously, but it will be good to let the bodies rest up.”

BYU coach Kalani Sitake said the team needs to play the schedule it was dealt.

“It is time to grow up and get better and toughen up. We are not 100%, but neither is Washington State. Neither was Baylor. There are a lot of guys that are banged up right now. That’s what happens in the game of football throughout a season. You just gotta tough it out,” Sitake said.

BYU’s quarterback platoon between Jaren Hall and Baylor Romney has ended, with Hall listed as the starter on the pregame notes. The offense is balanced, with running back Tyler Allgeier (670 yards) ranking in the top 25 in most national stat categories.

Washington State’s edge rushers are playing well, combining for eight sacks over the past three games. Brennan Jackson earned his second Pac-12 Conference Defensive Lineman of the Week award of the season following last weekend's win over Stanford. Jackson recorded a season-high six tackles, including one sack, and recovered the game-ending fumble in the win.

Washington State and BYU both have Cougars as mascots. They have played four times in the past, with BYU winning three of those games.