Weather cancels No. 23 Boise's First Responder Bowl vs BC 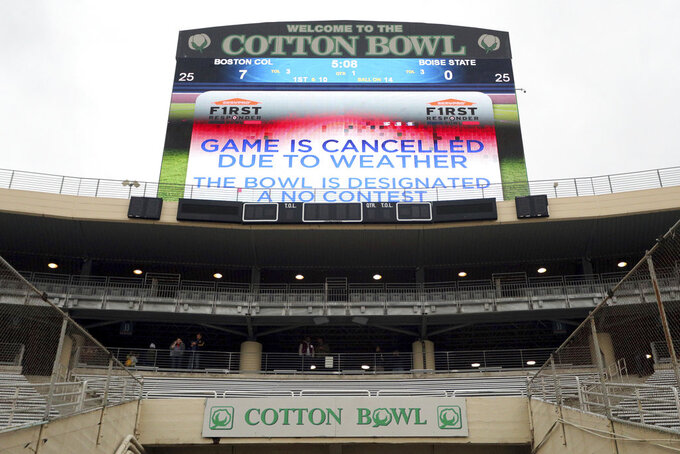 The First Responder Bowl between Boston College and Boise State was canceled due to weather and was designated a no contest after multiple lighting delays Wednesday, Dec. 26, 2018, in Dallas. (AP Photo/Richard W. Rodriguez)

The SERVPRO First Responder Bowl between the Broncos and Boston College was canceled because of the threat of severe weather after a delay of nearly 1 1/2 hours Wednesday.

The game was stopped with BC leading 7-0 with 5:08 remaining in the first quarter. The delay came not long after AJ Dillon ran 19 yards for a touchdown .

"In my career, this is a first," said BC coach Steve Addazio, finishing his sixth year in charge of the Eagles and 33rd year in the profession. "I don't second-guess anything about it. The decision was made for the right reasons and that's the welfare of both teams' players."

Both schools said they would offer refunds for tickets purchased through their athletic departments.

Associate bowl director Brett Ringler said officials met Tuesday to discuss the weather report and how they would handle the decision-making process.

"We followed all those protocols today and we finally had to come to a decision to cancel the game based on weather that was forthcoming as well," Ringler said.

The Broncos (10-3) were playing at the 86-year-old stadium for the first time, in their second meeting with BC. The other was the Eagles' 27-21 victory with Atlanta Falcons quarterback Matt Ryan on Boise's blue turf in the 2005 MPC Computers Bowl.

Boise, which won 34-14 at Wyoming in September in hazy conditions because of a wildfire, was trying for its second straight 11-win season after losing to Fresno State 19-16 in overtime in the Mountain West Conference championship game.

"Help me out guys, this is a new one," Boise coach Bryan Harsin said. "We prepared for this in fall camp where we ran into the locker room."

The Eagles (7-5) were going for their first eight-win season under Addazio in their first appearance at the Fair Park venue since Doug Flutie led a 45-28 victory over Houston in the 1985 Cotton Bowl. That bowl game has since moved to the home of the Dallas Cowboys in Arlington, halfway between Dallas and Fort Worth.

"We are all deeply disappointed," Addazio said. "A lot went into this, a lot of work and a lot of preparation. Tough decisions have to be made. And they have to be made in the big picture of things."

This was Boise's second bowl trip to Texas since joining FBS in 1996. The Broncos beat TCU, 34-31, on the Horned Frogs' home field at the PlainsCapital Fort Worth Bowl in 2003.