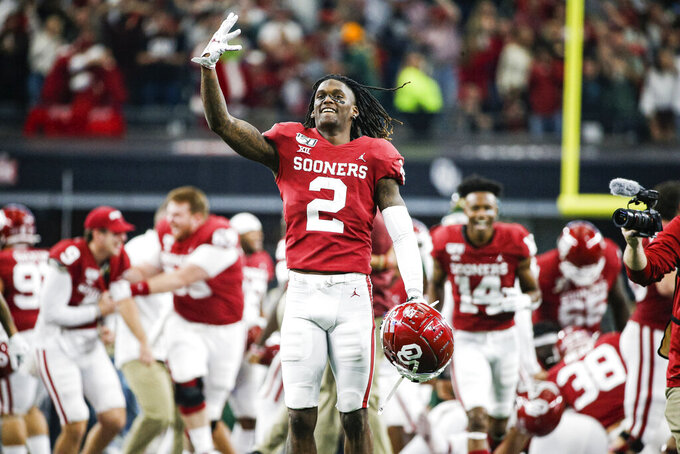 A flick of the wrist, a slight shift of the shoulder and they're off.

Talented receivers are a big part of this year's College Football Playoff. Never before has there been four teams in the CFP so prolific at scoring points. And it's in large part due to a growing — think 6-foot or taller — list of game-breaking receivers keen on quick cuts, one-handed grabs and the ability to catch almost any pass thrown their way.

“Not always sure how we do it,” said Clemson's top receiver Tee Higgins.

Neither is anyone else who has seen the impressive weekly grabs by Higgins and the other receivers in the CFP who have become must-see TV:

— No. 1 LSU has a pair of 1,000-yard receivers in Ja'Marr Chase and Justin Jefferson, who have combined for 32 touchdowns this season.

— No. 2 Ohio State features K.J. Hill and Chris Olave. The duo has 21 touchdown catches between them.

— Third-ranked Clemson pairs Higgins with Justyn Hill, a combination that has helped the defending national champions win their past 28 games.

— And Oklahoma showcases CeeDee Lamb. All Lamb has done is average nearly 21 yards a catch and haul in 14 touchdown receptions.

It's the first time the four CFP participants enter the national semifinals averaging more than 43 points a game — which gives offense-crazed fans the promise of two potentially explosive showdowns when LSU faces Oklahoma in the Chick-fil-A Bowl and Ohio State takes on Clemson in the Fiesta Bowl on Saturday.

“There's no doubt things have changed," he said.

It was only four years ago LSU was a run-heavy team with Leonard Fournette leading the charge. His 22 touchdowns were more than the 13 the Tigers passed for that 2015 season.

Tigers coach Ed Orgeron acknowledged his defense has had to adjust sometimes to their fast-paced attack.

“But we're not going to slow down,” he said.

None of the four teams in the CFP are expected to slow down, not with the pieces in place to blow opponents out.

“Ja'Marr is a special talent," Orgeron said. "Not only is he fast, but he's very strong.

"He loves to win the one-on-one matchup," Orgeron continued. “He's physical. He works hard. He catches everything. He's got big hands, a route runner. I think he's a phenomenal player.”

Chase said his route-running has improved considerably this season, particularly because he has gotten better at creating separation early when defensive backs try to disrupt his pass pattern.

"Executing coming off the line most of the time has been a big difference from last year to this year," Chase said. “It's more about footwork and hand-eye coordination.”

All the talented receivers in the CFP have shown great hand-eye coordination.

Perhaps the most talked-about play in Clemson's 62-17 destruction of Virginia in the Atlantic Coast Conference title game was Higgins' highlight-reel sideline grab — reaching out of bounds while keeping his toes inbounds to complete the catch.

“Every time I see that I say, 'Man, I really caught that. It's crazy,'" Higgins said with a smile.

Typically, Higgins or Ross (he had three TD catches in Clemson's 44-16 blowout of Alabama to win the national title a year ago) has created enough space to catch passes from quarterback Trevor Lawrence.

Oklahoma's Lamb also has been a nightmare for defenders, even with his frustration at times when he feels he is not getting the ball when he's open.

Lamb is “so invested in this team and sometimes he wants it so much you’ve got to take a deep breath and go on to the next one," Riley said.

At Ohio State, Hill has already surpassed David Boston's career mark with 195 catches. A reception against Clemson will give him another Buckeyes' record with a catch in 49 straight games.

Second-year Buckeyes coach Ryan Day wasn't at Ohio State for all of Hill's five seasons, but appreciates what he has seen firsthand, saying Hill has consistently excelled.

He's not alone, and that could make for an entertaining College Football Playoff.