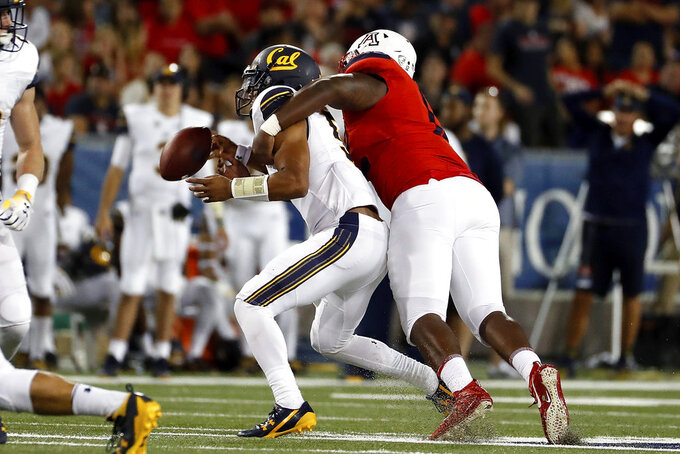 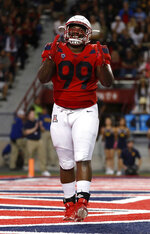 But turnovers doomed Cal in another loss to the Wildcats in what Arizona coach Kevin Sumlin called "a really gutty performance" by his team.

The Wildcats took advantage of four turnovers in the second half, all by Cal quarterback Brandon McIlwain, turning two of them into touchdowns, and the Wildcats handed California its 14th consecutive Pac-12 road loss with a 24-17 victory over the Bears on Saturday night.

Scottie Young Jr. had two fourth-quarter interceptions, returning the second one 24 yards for a touchdown to put Arizona up 24-14 with 3:13 to play.

"We gave them two touchdowns and we can't do that," Cal coach Justin Wilcox said. "We had turnovers, penalties and self-inflicted wounds. ... We have smart guys so we have to play smarter. We can't make dumb mistakes like that."

Cal's Greg Thomas kicked a 35-yard field goal with 16 seconds to play but the Wildcats recovered the onside kick attempt to preserve the victory.

McIlwain, who got his first start for Cal and played the entire game at quarterback after sharing the job the first three games, ran for two touchdowns but in the second half threw three interceptions and fumbled the ball away.

He also was stopped short on a fourth-and-one situation at the Arizona 3-yard line as Cal tried to take the lead rather than settle for what would have been a game-tying field goal.

Down 14-10, Arizona took the lead late in the third quarter with a strange combination interception return/fumble return.

Colin Schooler picked off McIlwain's pass and returned it 39 yards. As he was running, he had the ball knocked loose by Cal's Jeremiah Hawkins. The ball bounced once and the Wildcats' Azizi Hearn grabbed it in stride and raced 34 yards to the end zone for the score to make it 17-14 with 3:19 left in the quarter.

"That went from a good play to a bad play to a great play," Schooler said. "It was a huge momentum swing."

Cal drove to the Arizona 3-yard line and went for it on fourth-and-one. But McIlwain was stopped for no gain by Derek Boles and a host of other tacklers, keeping the Wildcats up by three points.

After Arizona fumbled the ball away at midfield, Young intercepted McIlwain's pass and returned it 35 yards to set up Josh Pollack's 40-yard field goal try. But it bounced off the left upright and it remained a three-point game with 7:05 to play.

McIlwain completed 32 of 43 passes for 315 yards with no touchdowns and three interceptions. He rushed 107 yards, including touchdown runs of 25 and 23 yards.

McIlwain was coming off a 123-yard rushing game in last weekend's home loss to Oregon, becoming the first Cal quarterback to reach 100 yards on the ground since Joe Kapp in 1958.

He appeared in eight games, three as a starter, as a freshman at South Carolina two seasons ago. He had been sharing quarterback duties at Cal with redshirt freshman Chase Garbers before Saturday night.

Khalil Tate was 15 of 25 for 141 yards and a touchdown for Arizona. He also gained 40 yards on eight carries despite aggravating an ankle injury.

Tate directed an 11-play, 75-yard scoring drive on the opening possession, culminating with a 31-yard touchdown pass to Tony Ellison.

Tate was sacked and came up limping significantly on the next possession. He left the game for one series, in favor of true freshman Jamarye Joiner, but returned and reeled off a big 17-yard run late in the game.

Sumlin said it was pre-planned for Joiner to play the third series of the game.

California: The Bears outplayed Arizona much of the night and may have found their quarterback in McIlwain but those second half turnovers are cause for concern. And the Bears still are looking for a Pac-12 win for Wilcox.

Arizona: The opportunistic Wildcats defense saved this one after the Arizona offense misfired most of the night. Still, the Wildcats are 2-1 in the conference and Kevin Sumlin's rough start doesn't look quite so bad.