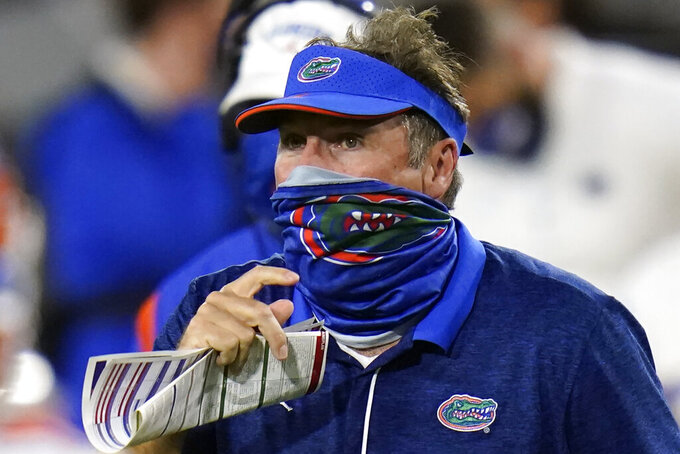 Florida head coach Dan Mullen, right, pauses during a timeout against Georgia during the second half of an NCAA college football game, Saturday, Nov. 7, 2020, in Jacksonville, Fla. No. 6 Florida doesn't really even try to run the ball anymore. There's an occasional handoff here and there, but the Gators are mostly one-dimensional _ and that's fine with coach Dan Mullen, Heisman Trophy front-runner Kyle Trask and arguably the deepest receiving corps in the country. (AP Photo/John Raoux)

Alabama has swept through the regular season with ease, navigating a schedule with all Southeastern Conference games amid the perils of COVID-19.

The top-ranked Crimson Tide heads into Saturday night's SEC championship game against No. 11 Florida with an elusive goal still in sight: An undefeated season.

For all those dominant Nick Saban teams in Tuscaloosa, only one has finished with a perfect record, and that was 11 years ago. The Tide (10-0) has appeared all but untouchable so far, posting the fifth undefeated regular season of a Saban era that has included five national titles.

Alabama still would have to get through the Gators (8-2) and two playoff games to join that 2009 juggernaut that went 14-0.

“How you finish is the most important thing in terms of your legacy as a team so it’s not what we have done up to this point, although we’re all proud and appreciate that the players have done a good job so far,” Saban said Monday. "It’s about how you finish. You've got to look forward, not backwards.”

The Gators know how fine a margin there can be between perfection and a couple of losses. They lost 37-34 to LSU after Cade York’s 57-yard field goal with 23 seconds left, aided by a foolish penalty and followed up by a Gators miss

Now, they’re two-touchdown underdogs against the Tide and of course would like nothing more than to derail Alabama's pursuit of perfection.

“We’ve still got the SEC championship on the line,” Florida linebacker Ventrell Miller said. “This is a great opportunity to go out and show the world how talented we are, how good of a team we are.”

Past history indicates Alabama is a long way from done. But the Tide has made things look easy so far, dispatching its two best opponents No. 5 Texas A&M (52-24) and No. 10 Georgia (41-24) with ease. No team has come closer than the 63-48 shootout with Mississippi, and that amounted to a turning point for Alabama's defense.

The Tide has won its games by an average margin of 32.7 points, topping even Saban's previous most dominant teams.

Alabama has flirted with other undefeated seasons, but only been able to seal the deal that once. The Tide posted perfect regular season records in both 2016 and 2018, only to lose to Clemson in the national title games.

Perhaps the Tide’s two most dominant teams of the Saban era came in the 2009 and 2011 national championship seasons. In the first, Alabama outscored its opponents by an average of 20.4 points capped by a 37-21 win over Texas for Saban’s first national title in Tuscaloosa. Tailback Mark Ingram won the Heisman Trophy and Rolando McClain claimed the Butkus Award.

The 2011 team dominated opponents by an average of 26.9 points and allowed only 8 points a game. Alabama avenged the lone blemish, a 9-6 overtime defeat to LSU in the so-called Game of the Century, with a dominating 21-0 performance in the rematch to claim the national title.

The 2009 team is widely considered the gold standard.

“I guess it goes back to how they did it, and that’s just focusing on each play, playing one play at a time,” Tide quarterback Mac Jones said. "Obviously we have a great team and we fought through a lot of adversity this year.

“I feel like that’s definitely going to help us. I mean, none of that stuff matters in the past. We just have to focus on each day.”

Cornerback Patrick Surtain II said Saban will "bring it up sometimes because obviously we're having a special season. But the job is still not finished yet."