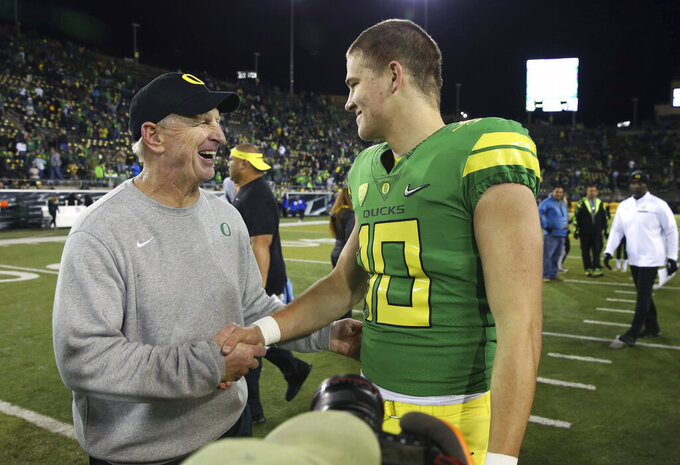 FILE - In this Nov. 18, 2017, file photo, Oregon defensive coordinator Jim Leavitt, left, congratulates quarterback Justin Herbert after the team's NCAA college football game against Arizona in Eugene, Ore. Florida State coach Willie Taggart is hiring former Oregon defensive coordinator Leavitt as an analyst to help fix a flailing defense, a person involved with the decision told The Associated Press on Wednesday night, Sept. 11, 2019. The person spoke on condition of anonymity because the hiring was still being finalized. Leavitt worked with Taggart in 2017 during the one season Taggart was head coach at Oregon. (AP Photo/Chris Pietsch, File)

The person spoke on condition of anonymity because the hiring was still being finalized. Leavitt worked with Taggart in 2017 during the one season Taggart was head coach at Oregon.

The Athletic first reported Leavitt would be joining Florida State's staff in the off-the-field role of quality control analyst.

Leavitt stayed behind when Taggart took the Florida State job after the 2017 regular season, hoping to land the head coaching job at Oregon. That went to Mario Cristobal. Leavitt remained defensive coordinator last year, but parted ways with Cristobal after the season and has been out of college coaching since.

Barnett was hired away from Michigan State after Taggart could not lure Leavitt to Tallahassee, Florida.

Leavitt was 95-57 in 13 seasons as USF coach, building a fledgling program into a regular bowl participant. He was fired in 2009 after an investigation by the school found he grabbed and hit a player, and then misled school officials.

He landed in the NFL with the San Francisco 49ers before returning to college as defensive coordinator at Colorado under Mike MacIntyre in 2015. Leavitt helped turn around a struggling defense and the Buffs won the Pac-12 South in 2016.

Taggart hired Leavitt in 2017. After Taggart left Oregon, Leavitt was given a four-year contract that paid $1.7 million per season, making him one of the highest-paid coordinators in college football.

But the relationship between Cristobal and Leavitt was rocky, and Leavitt left Oregon earlier this year with a $2.5 million buyout.