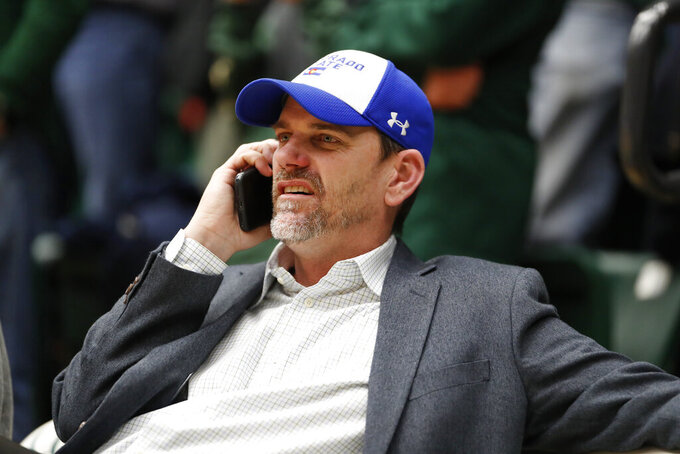 FILE - In this Feb. 6, 2019, file photo, Colorado State football coach Mike Bobo chats on his mobile phone while seated at an NCAA college basketball game between Nevada and Colorado State in Fort Collins, Colo. Bobo preaches toughness and accountability. He demonstrated that toughness last season by walking the sidelined despite fighting a rare autoimmune disease that caused him to lose sensation in both feet. He showed accountability by declining a $100,000 pay increase due to him after the Rams struggled to a 3-9 record in 2018. That's why his messages hit home. (AP Photo/David Zalubowski, File) 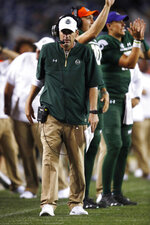 He couldn't cash in and accept a pay increase. Not after the Rams went 3-9 last season.

The only raise that interested him involved his team's play.

Take this to the bank: When Bobo throws around words like accountability and toughness as character traits he wants his players to display, the Rams are fully invested.

Anyone who turns down $100K surely is accountable. And anyone who went through his ordeal clearly demonstrates toughness. Bobo hobbled along the sideline last season with numbness in his feet caused by an autoimmune disease.

"Coach is one tough dude," said quarterback Collin Hill , whose team opens against Colorado at Broncos Stadium next Friday.

Around this time a year ago, Bobo was in a hospital after experiencing numbness in his feet. He was eventually diagnosed with what doctors called peripheral neuropathy , a condition that often causes weakness, numbness and pain in typically the feet and hands.

He called offensive plays from the coaches' box in the first game before returning to the sideline. He had an assistant next to him to serve as a buffer in case a play came too close.

It was a rough season all around for the Rams, with the highlight being a comeback win over Arkansas. After a lackluster year, Bobo called director of athletics Joe Parker and told him to keep a pay raise he was owed. Bobo wanted accountability to start with him.

Still, his decision raised a few eyebrows. It's a move most coaches won't be rushing to emulate.

"I had a lot of people saying, 'What are you doing?'" Bobo said . "But it wasn't about the reaction from other people or the fan base or the media. It was really meant for my team."

In January, Bobo stood in front of his team and told the Rams they were turning the page.

"I just wanted to say, 'Look, all that went on last year was on me,'" said Bobo, who's 24-27 at Colorado State since taking the position before the 2015 season after a long tenure at Georgia as a player and then as an assistant coach. "I said, 'This (giving up a raise) is my way of showing accountability to you guys and it's always going be on me but if you're going to be in this room you're going to be accountable to everybody in this room, too.' Because that wasn't my football team last year. That was not. I didn't like the effort at times. And that should never be questioned. Never.

"So I feel like we're in a good place right now."

About his health: He's gradually making improvements. He can stand on his tiptoes these days, which he couldn't do a bit ago. He can also shuffle a deck of cards, something the numbness in his right thumb wouldn't permit about eight months ago.

"My feet, they're still numb on the bottom," said Bobo, who's guided the Rams to three bowl games. "It just takes time."

This season, receivers coach Joe Cox will take on another role — timeouts coach. Since Bobo can't sprint, Cox will be in charge of running toward officials if the Rams need a stoppage in play and the action is down the sideline.

An image of the Arkansas game from last September popped into Bobo's mind, when the Rams scored with eight seconds remaining in a 34-27 victory.

"I was like, 'Holy cat, what if I have to call time out right here?'" Bobo said. "But we ended up scoring."

Bobo's resolve resonates with the Rams, who are looking to snap a four-game slide against the Buffaloes.

"What he went through wasn't easy but he still was out there with us," said Hill, who played in 10 games in '18 as he worked his way back from left knee surgery. "It showed everybody that he's got our back and we have to have his. He wants us to be a tough team."

Bobo's seeing plenty of signs of that in spring ball and through camp.