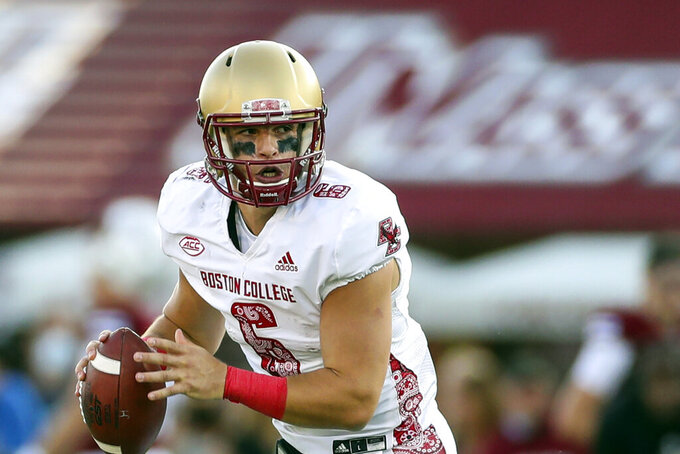 FILE- In this Saturday, Sept 11, 2021, file photo, Boston College Eagles quarterback Dennis Grosel (6) looks to pass during an NCAA football game against the Massachusetts in Amherst, Mass. Grosel is a pretty good option for Boston College when it heads to the stadium that’s home to the Eagles (NFL version) to play Temple (1-1). (AP Photo/Damian Strohmeyer, File)

PHILADELPHIA (AP) — Jeff Hafley spent the bulk of a midweek Boston College practice coaching the defense. The second-year head coach got enough of a peek of Dennis Grosel on the way out to see the new QB’s throws were on the money.

“On the last play, he hit about an 80-yarder. He looked good on that one play,” Hafley said.

The Eagles will take a few more just like it against Temple.

Grosel is a pretty good option for Boston College (2-0) when it heads to the stadium that’s home to the Eagles (NFL version) to play Temple (1-1). Grosel threw for 520 yards and four touchdowns in the final start of last season in place of injured Phil Jurkovec.

Jurkovec, who led BC to an 8-4 record over two seasons since he transferred from Notre Dame, could miss the reminder of this one after he suffered a right wrist injury last week. Jurkovec, who posted on Instagram a photo of his hand wrapped in a bandage, needed surgery.

Hafley was unclear on when Jurkovec was injured, just that “he went to fall and landed on it.”

Jurkovec was the ACC co-quarterback of the week for Sept. 7, when he completed 16 of 24 passes for 303 yards and ran for 61 more in a 51-0 victory over Colgate. It was his fifth career 300-yard passing game.

Against UMass on Saturday, he completed three of four passes for 22 yards before he headed to the locker room late in the first quarter. Grosel replaced him and passed for 199 yards and a touchdown to help Boston College beat UMass 45-28.

Hafley told the team injuries are always hard but he used Grosel’s work ethic — he started seven games as sophomore and eventually yielded the No. 1 spot to Jurkovec — as an example of the right way to stay ready.

“Dennis could have left last year and started for a lot of teams in college football,” Hafley said. “He doesn’t sulk, he doesn’t complain. He knows his role and he’s ready to play.”

Grosel said he’s ready for the familiar role of backup-turned-starter in a pinch.

Temple coach Rod Carey extended the program’s bowl streak to five with an 8-5 record in his first season. Since then? Try 2-7. The Owls followed the bowl with a 1-6 record last year and beat Akron last week for their first win.

Temple is trying to snap a six-game losing streak against Boston College, dating to 2000. The Owls haven’t played BC at Lincoln Financial Field since 2004 when both teams were in the Big East.

Justin Lynch made his first career start against Akron and threw for 255 yards and two touchdowns. He rushed for another TD.

D’Wan Mathis, a transfer from Georgia, is in the mix after sitting out last week a left foot/ankle injury. He could be available to play Saturday, forcing Carey to make a decision — or play two. Carey successfully juggled playing two QBs in a game at Temple and at his previous stop at Northern Illinois.

“You always like to have one quarterback,” Carey said. “I’ve said that even when I’ve played two.”

BC athletic director Pat Kraft held the same job at Temple for seven years. Kicker Aaron Boumerhi, defensive tackle Khris Banks and linebacker Isaiah Graham-Mobley all transferred to BC from Temple. Boumerhi is injured and has not played this season.

Carey said he’s “happy for everybody that was here that moved on. They obviously moved on for individual reasons.”

Boumerhi, the Eagles’ starting kicker the last two seasons, was injured during the preseason and will not be able to return, the school said. He converted 16 of 20 field goal attempts last season.

Boston College is a 14.5-point favorite, according to FanDuel Sportsbook.