Central Connecticut St has little to lose vs reeling Miami 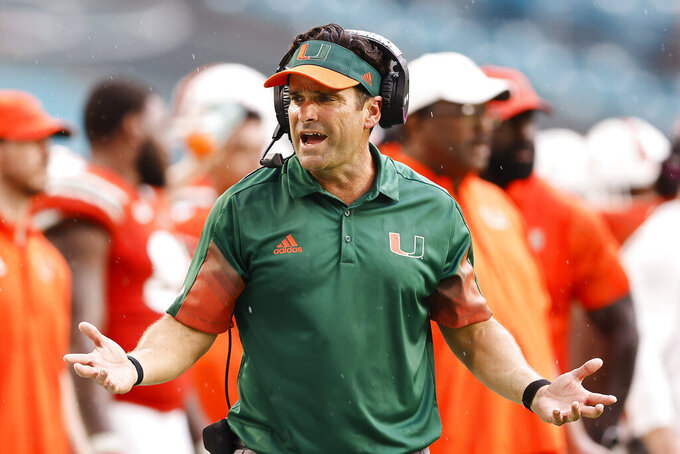 Some players with things like nagging aches and sore ankles, maladies that might keep them out of a practice in other weeks, seem to have quickly healed. Seems like everybody wants to make sure they can play this week.

The lower-division Blue Devils (1-2) visit the now-unranked, banged-up and reeling Miami Hurricanes (1-2) on Saturday, a game that even amid Miami’s current struggles is expected to be a one-sided mismatch.

“This one’s easy to motivate for,” CCSU coach Ryan McCarthy said. “It shouldn’t be like that, but these are 18- to 22-year-old kids. Trust me, I won’t have to say much to get them ready to play this one.”

The last time CCSU — which went 11-2 in 2019, then didn’t play last season because of the pandemic — faced a Power Five team, it lost by 43 points to Syracuse in 2017. It lost a game to Southeastern Louisiana last weekend by 46 points, at its home 5,500-seat stadium in New Britain, Connecticut with about half the seats unfilled.

This week, they play in an NFL palace that routinely hosts Super Bowls, on television, against a program with five national championships and a whole slew of alumni who make millions by playing on Sundays. And while there will be some wide-eyed looks when CCSU goes over to Hard Rock Stadium for its Friday walk-through, McCarthy is preparing for this game just like he does any other.

“What will be will be,” McCarthy said. “I know, really, there’s not a lot of pressure per se because we’re not supposed to win this game. We’re supposed to come down, play a game, obviously make the Miami fans happy for a couple days before they play another team and collect the check. Well, that’s not why you get into this business. You get into this business to compete.”

QB D’Eriq King (shoulder) is hurting and not expected to play, meaning either Tyler Van Dyke or Jake Garcia will get their first career start for the Hurricanes. Miami coach Manny Diaz said both of those quarterbacks will play. King has started all 13 Miami regular-season games, as well as last season’s bowl game, since he arrived on campus in 2020.

Miami, as would be expected when an FBS school plays against an FCS school, is going to have a major size advantage in the trenches. The Hurricanes have 20 players weighing 300 pounds or more on their roster; CCSU has eight players checking in at 300 or more. The Hurricanes’ total roster weighs about two tons more than CCSU’s, with a Miami player on average weighing about 15 pounds more than his CCSU counterpart.

The schools have never met, but CCSU’s last game against an FBS opponent almost led to a big upset. The Blue Devils led Eastern Michigan 29-28 after a 68-yard touchdown pass with 2:05 remaining, then got the ball back after an interception with 1:15 left. But the ensuring CCSU drive ended in disaster, with a punt getting blocked and EMU running it back 30 yards for the game-winning touchdown with 10 seconds left on the clock.

Miami only has five days after this game to prepare for the Atlantic Coast Conference opener against Virginia. The Hurricanes plan to use a slew of young players against CCSU, with hopes of getting some first-stringers rest before conference play.

Miami is paying CCSU $650,000 to play in this nonconference matchup.