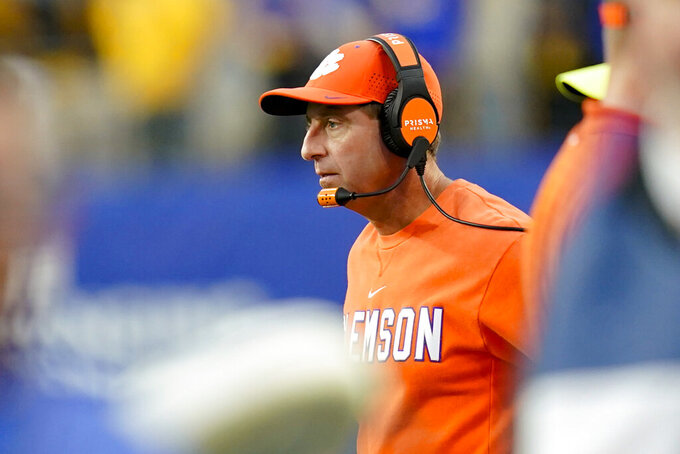 FILE - Clemson head coach Dabo Swinney watches as his team plays against Pittsburgh during the second half of an NCAA college football game, Saturday, Oct. 23, 2021, in Pittsburgh. Pittsburgh won 27-17. Clemson and Iowa State are scheduled to play in the Cheez-It Bowl on Wednesday, Dec. 29, 2021. (AP Photo/Keith Srakocic, File)

ORLANDO, Fla. (AP) — When Iowa State and Clemson meet in Wednesday’s Cheez-It Bowl, it’ll be out with the old for the Cyclones and in with the new for Tigers.

Iowa State, a disappointing 7-5 after starting the season ranked No. 7, will say goodbye to 17 players who have made at least 21 starts under head coach Matt Campbell. The group includes record-setting running back Breece Hall, who is planning to attend the game but won’t play as he prepares for the NFL draft.

Clemson similarly fell short of expectations after opening the season at No. 3 and seeing a six-year streak of reaching the College Football Playoff come to an end. For the Tigers, Brandon Streeter will make his debut in the Cheez-It Bowl as the Tigers offensive coordinator, while co-defensive coordinators Wes Goodwin and Mickey Conn will call the shots on the other side of the ball.

Tigers’ head coach Dabo Swinney called his decision to promote from within a “no-brainer.”

The Tigers’ 2021 struggles were somewhat washed away by a stirring five-game winning streak to close the season.

“Having that comfort level of being around the people that I’m around and then them having trust in me gives me a lot of confidence,” said Streeter, a former Clemson quarterback who has been on the coaching staff since 2014. “I’ve just got to do the best I possibly can. I’m excited about attacking the opportunity.”

Streeter previously called plays for the Tigers in the 2020 College Football Playoff after Elliot contracted COVID-19 and had to miss Clemson’s 44-28 loss to Ohio State. The Tigers’ offense mostly sputtered that game, and many of those same struggles carried over into this season.

Sophomore quarterback D.J. Uiagalelei battled consistency issues, playing most of this season with a sprained posterior cruciate ligament in his right knee. But the QB said his familiarity with Streeter has smoothed out the transition to a new coordinator.

Uiagalelei may still be trying to find his footing as Clemson’s quarterback, but Iowa State senior Brock Purdy has already cemented his legacy as the most successful signal-caller in school history.

In addition to being 30-16 as a starter with seven fourth-quarter comeback victories, Purdy enters his final college game with 11,966 passing yards with 80 career touchdowns.

“I’m trying to enjoy all the relationships and moments with my teammates this whole week being here,” said Purdy, whose 73.1% completion percentage this season ranked fourth in the nation. “It’s been special. It’s definitely going to be sad when the fourth quarter ends and that’s my last time in cardinal and gold.”

Iowa State thrived in defensive coordinator Jon Heacock’s 3-3-5 defensive alignment primarily because of the experience on that side of the ball. Four seniors — Mike Rose, Enyi Uwazurike, Greg Eisworth and Anthony Johnson -- have at least 41 starts, while four other seniors started for at least two seasons. That group helped the Cyclones rank 10th nationally in total defense.

“It’s bittersweet; it’s been a big part of my life being here,” said Eisworth, who was third on the team in tackles. “But some of us are ready for that next step, whatever that next step is. Everybody’s mature enough to take that next step and ready to go blossom.”