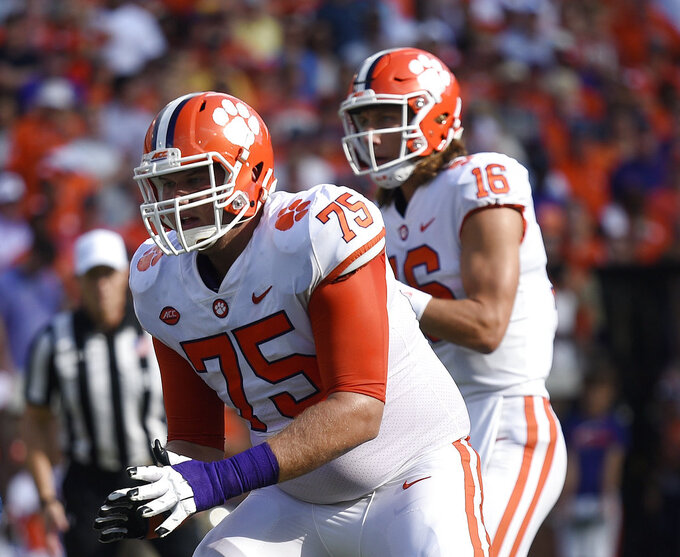 FILE - In this Sept. 22, 2018, file photo, Clemson offensive tackle Mitch Hyatt (75) blocks for quarterback Trevor Lawrence during the first half of an NCAA college football game against Georgia Tech, in Atlanta. Hyatt, a four-year starter who’s played the most snaps in Clemson history, is the anchor of an offensive line that’s helped the team rush for an all-time single-season record 3,588 yards. (AP Photo/Jon Barash, File) 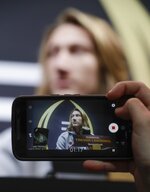 It's a move that could've led to dissension, in-fighting and a divided locker room. Instead, the switch started the second-ranked Tigers on a glide path to the national championship game where they'll take on defending champion Alabama on Monday night.

"It's just a situation where (Lawrence) has been in the game, he has been productive and to be fair to competition, just like we do at every position, coach (Swinney) decided to name him the starter," Clemson co-offensive coordinator Tony Elliott said.

Swinney insists, that despite Lawrence's talent, the swap wasn't made with Alabama in mind.

"You've got to prove that you deserve to be the starter this year," he said Saturday. "That's just the culture we have."

Lawrence's play has borne that out .

He's thrown for 2,933 yards with 27 touchdowns with just four interceptions. Clemson has averaged more than 45 points and 540 yards a game since Lawrence took over against Syracuse in game five.

Swinney said Lawrence never acted like he didn't belong, showing a mix of confidence, poise and ability that stood out. Swinney realized that last spring when he "saw how quickly (Lawrence) processed things, how easy it was for him," the coach said.

The hard part for Swinney came in September when he elevated Lawrence to starter over Bryant.

The quarterback selection was a choice looming since the 6-foot-6, strong-armed, long-haired Lawrence arrived on campus. Two experienced reserve passers in Zerrick Cooper and Tucker Israel transferred in January. Another five-star quarterback in Hunter Johnson left in May for Northwestern after going through spring ball.

Bryant, who went 16-2 as a starter, led Clemson to the Atlantic Coast Conference title and the College Football Playoff a season ago. But he struggled in the Tigers' passing game and a poor showing in the 24-6 loss to Alabama in the Sugar Bowl last year left the door wide open for speculators to pencil in Lawrence ahead of the popular Bryant.

Bryant kept the job into the season and started Clemson's first four games until Swinney knew what he had to do.

"At the end of the day, this is not middle school," Swinney said in September. "There's tough decisions that have to be made at his level and you have to do what's best for the team."

Some programs might not have moved forward unscathed after such a switch. Clemson All-American defensive tackle Christian Wilkins never had a doubt the Tigers would remain on track.

"I'm sure a lot of you all would've liked more controversy," Wilkins joked this week. "That's more of a testament to our leadership. We've got a lot of older guys who've been around for a while, just experienced a lot and we weren't going to let that faze us."

Wilkins said they all still love and respect Bryant, who has transferred to Missouri, "but we weren't going to let that stop us."

Wilkins, the 6-4, 315-pound senior, went a long way to calming any locker room concerns about the switch when he took Lawrence to breakfast the week of Bryant's demotion. Wilkins downplays the meeting — "I was going to eat breakfast anyway," he said — but Lawrence believes it gave him instant credibility to lead a veteran-stocked club.

"It meant a lot," Lawrence said.

Things couldn't have started worse for Lawrence and the Tigers when the freshman left with an injury before halftime of his first college start against Syracuse on Sept. 29 and the Tigers trailed 23-13 with less than 13 minutes left. But Clemson rallied with one-time sixth-string passer Chase Brice in the game and tailback Travis Etienne rushing for two TDs down the stretch of the 27-23 win.

Lawrence threw two touchdown passes in his next start, a 63-3 win at Wake Forest, and has not slowed down since.

Swinney is pleased with Lawrence's progress, but still hurts when thinking about the quarterback change. Bryant gave his all to the Tigers during his time there, Swinney said, but this was simply a football decision.

"I'm not going to apologize for doing my job," Swinney said.