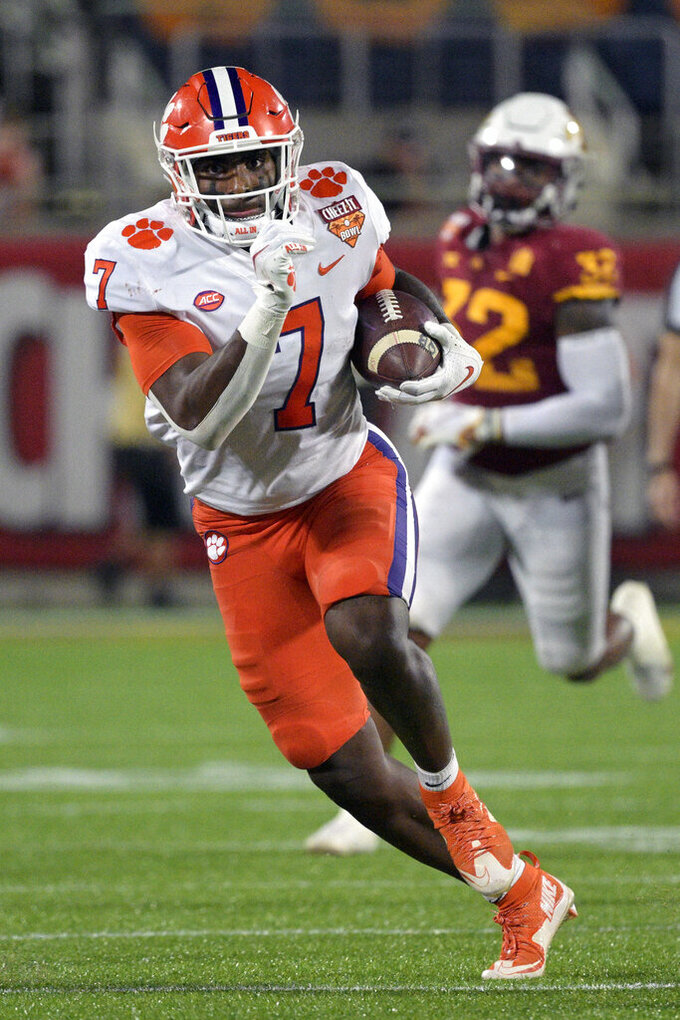 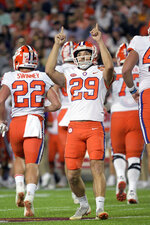 ORLANDO, Fla. (AP) — Clemson coach Dabo Swinney became the sixth-fastest coach in college football history to reach 150 victories. He gave the credit to his players following the No. 19 Tigers’ 20-13 victory over Iowa State on Wednesday night in the Cheez-It Bowl.

“This team’s journey was full of adversity and we probably had more adversity this year than the last seven combined,” said Swinney, who became just the third coach to win at least 150 games in fewer than 15 seasons. “What made it great was how everybody in the whole program, the thing that never flinched was the leadership.

"This was a complete program effort. … What made this team special was because they didn’t make excuses.”

Cornerback Mario Goodrich was named the game’s MVP after returning an interception 18 yards for a third-quarter touchdown and swatting the ball out of Iowa State quarterback Brock Purdy’s hands in the final minute to preserve the victory.

“It means a lot for everyone on this team because we started off 2-2 and to rally back and get 10 wins is amazing," Goodrich said. "To keep the tradition going, it’s a legacy. It’s amazing to finish my last game with these guys and go out on a good note.”

Iowa State, which was severely limited playing without star tailback Breece Hall, mustered just 270 yards and 14 first downs against a Clemson defense that came into the game second in the nation in scoring defense.

Iowa State dropped four of its final six games of the season. The Cyclones got within 20-13 with 9:42 to play on Andrew Mevis’ third field goal and Purdy’s 6-yard touchdown pass to Charlie Kolar.

Purdy, the winningest quarterback in school history, completed 22 of 39 passes for 204 yards, but his two turnovers — both produced by Clemson’s Goodrich — proved costly.

“For me, a result doesn’t dictate what Brock Purdy has done for Iowa State football,” Iowa State coach Matt Campbell said. “There were a lot of plays he made that were huge for our team to get back in the game. There’s no greater competitor that I’ve been around who wanted the result to be different (than Purdy). For Brock, it’s, `Thank you for all you’ve done.’”

Iowa State’s defense, which entered 10th in the nation in total defense, held Clemson to 315 yards. However, it wasn’t enough to earn the Cyclones’ their first bowl victory since 2017.

“This game will live in my head the rest of my life,” Iowa State safety Greg Eisworth said.

Swinney, who guided the Tigers to national championships in 2016 and ’18 and to six straight College Football Playoff trips, joined Urban Meyer and Bob Stoops as the only coaches in college football history with at least 150 victories in less than 15 seasons at the helm. Swinney wrapped up his 14th season leading the Tigers.

Iowa State: The Cyclones will be hard-pressed to keep up their recent run of success with 19 senior starters departing — 17 of which had at least 21 starts.