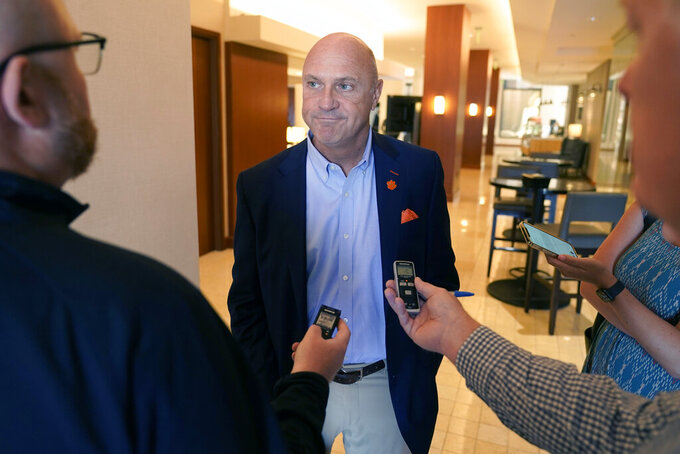 DALLAS (AP) — The 11 university presidents and chancellors who oversee the College Football Playoff on Tuesday authorized a continued evaluation of a proposed 12-team playoff that, if adopted, could still be another five years away.

The move by the CFP board of managers was a necessary step to determine the feasibility of tripling the size of the playoff field.

“The four-team playoff has been a great success and I’m confident it will remain a success," said Mark Keenum, the Mississippi State president and CFP board chairman. “Nevertheless, it is our responsibility to explore options to make it even better by increasing the number of schools that participate in it.”

The 12-team proposal was presented to the presidents and chancellors after the 11-person panel that manages the postseason system — 10 conference commissioners and Notre Dame athletic director Jack Swarbrick — last week had its first meeting with everyone together in person.

Keenum said the next step is a summer review phase that will “engage other important voices," including athletes, campus leaders and coaches.

“We’re going to be just very deliberate and we’re not going to talk timing until we get the answers to all the feasibility issues and until we have a chance to to listen and talk to athletes, presidents, coaches, partners,” Penn State President Eric Barron said. “So it’ll take time.”

The proposal doesn't address when a new format or any expansion could be implemented. The earliest possibility is 2023 if everything falls into place. It could as be as late as the 2026 season after the current media rights contract with ESPN expires, along with some contractual considerations with bowl games, including those that are part of the New Year's Six.

Southeastern Conference Commissioner Greg Sankey issued a bit of a caution when asked about how soon a new playoff could be up and running.

“I would temper my expectations, and never say never, but we’ve got an opportunity to dig deeper as a group,” Sankey said. “Those answers are going to come. There were decisions made back in 2012, 2013, 2014 that guide us for 12 years. That's reality. Can that change? I don’t know."

Indianapolis will host the CFP national championship game for the upcoming season, followed by Los Angeles the next year. There is also a date set for the title game in Houston at the end of the 2023 season.

That subcommittee also shared with the presidents various other options that had been considered, including plans staying at four teams and having as many as 16 teams. The Championship Subdivision playoff field began with four teams in 1978; it has expanded five times and now includes 24 teams.

“This has been vetted pretty carefully,” West Virginia President Gordon Gee said of the CFP proposal. “So almost every question you could possibly anticipate they had an answer for.”

Gee said the 12-team proposal “makes absolute sense” if all the pieces come together, and described there being unanimity among the presidents in the room about moving to the next phase of gathering more information. But Gee also said the group also expressed “that we now need to marinate this.”

Keenum said the meeting in a hotel at the Dallas-Fort Worth airport made him aware of numerous legal matters that have to be taken into consideration, along with getting extensive feedback.

“We have bowl partnerships with our six playoff bowls, every conference has affiliations with its own set of bowls and there are contracts that are in place already,” Keenum said. “We're just past halfway under our current 12-year contract. What are all the legal issues that have to be addressed from that standpoint? We have a media partner right now, ESPN, and so ... how does this impact that relationship with that particular provider, not only for the balance of the contract, but beyond.”

Those are answers the presidents and chancellors don't have, and still might be trying to get when they are next scheduled to meet as a group Sept. 28.

“I want to caution observers of this process to not rush to conclusions about what our board may decide,” Keenum said. “We still have a lot more information, more facts that we need to bring to the table for the board members to make any decisions going forward.”