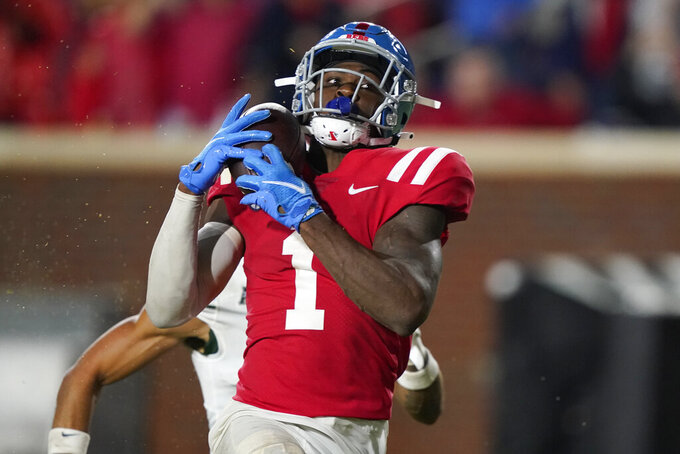 Mississippi wide receiver Jonathan Mingo (1) pulls in a pass for a 50-yard touchdown against Tulane during the first half of an NCAA college football game Saturday, Sept. 18, 2021, in Oxford, Miss. (AP Photo/Rogelio V. Solis)

OXFORD, Miss. (AP) — Matt Corral was not going to let an extended weather delay spoil his night. The Mississippi quarterback shrugged off the nearly two-hour pause and posted a record-setting performance.

“We had the best week of practice that we’ve had since I’ve been here,” Corral said. “It showed tonight. The weather wasn’t going to stop us.”

Corral accounted for a school-record seven touchdowns in less than three quarters as No. 17 Mississippi defeated Tulane 61-21 Saturday night.

Corral ran for four touchdowns – 9, 15, 15 and 6 yards – and passed for three scores, finishing 23 of 32 for 355 yards. Corral had touchdown passes of 12, 50 and 45 yards to Dontario Drummond, Jonathan Mingo and Braylon Sanders, respectively.

Corral was lifted after directing three scoring drives early in the third quarter to build a 61-21 lead, capped by his final two touchdown runs. The Rebels finished with 707 yards of total offense, 403 by Corral, on a pace to merit consideration in the Heisman Trophy race.

“The numbers really don’t mean much to me. Not really,” Corral said. “But I think they mean something to him (Coach Lane Kiffin) and I think he wants it more for me than I do. I’m just happy we played so well.”

The Rebels (3-0) responded to the weather delay efficiently, scoring on six of the seven opening possessions, including touchdown runs of 19 and 11 yards by Henry Parish Jr. and Drummond. Jerrion Ealy led the Ole Miss rushers with 15 carries for 103 yards.

Tulane (1-2) was led by Michael Pratt with 166 yards on 10 of 18 passing, including touchdown passes of 39 and 22 to Shae Wyatt and Tyrick James, respectively. Cameron Carroll added a 1-yard touchdown run, but the Green Wave could not match the early pace, trailing 40-21 at halftime.

Tulane: The Green Wave have been resilient in road defeats at ranked opponents No. 3 Oklahoma and No. 17 Ole Miss. However, impressive efforts will have to translate into wins quickly if Tulane is to be a serious challenger for the American Athletic Conference title. Safety Macon Clark had a game-high 13 tackles.

Ole Miss: With an impending open week, the win completed a flawless September performance. The Rebels are unbeaten, ranked, improved defensively and showcase a highlight reel-type offensive unit that has rolled up 158 points and 1,906 yards in three games. Drummond has caught a touchdown pass in eight consecutive games and the Rebels set a school and SEC record for first downs in a game with 41.

The win will allow the Rebels an opportunity to climb in the poll this week, but a leap to the Top 10 next week would appear unlikely.

Tulane athletic officials Chris Maitre and Lorne Robertson took the initiative to provide a food break during the nearly two-hour lightning delay. The duo received transport by the Mississippi Highway Patrol, who drove the pair to a nearby restaurant that prepared to-go food for the Tulane players

Tulane: The Green Wave will play their first home game of the season against UAB next week. Hurricane Ida had forced the team out of New Orleans and to Birmingham for several week.

Mississippi: The Rebels will look to beat Alabama for the first time since 2015.