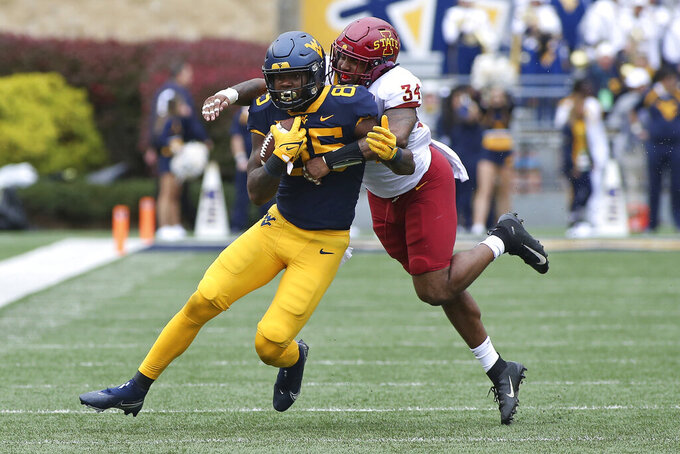 MORGANTOWN, W.Va. (AP) — West Virginia finally put together a solid effort after blowout losses to No. 22 Iowa State the past three seasons.

“We wanted to make a statement of how good a football team that we actually are,” Doege said.

Iowa State (5-3, 3-2) was missing leading tackler Mike Rose because of an undisclosed injury and the league’s top defense gave up a season-high 492 yards. The linebacker had started all 45 previous games in his career. The Cyclones had kept their seven previous opponents under 350 yards.

West Virginia ”played a great football game," Iowa State coach Matt Campbell said. “From my standpoint, a lot of credit to coach (Neal) Brown and his kids. We have respect for who they are and what they are.”

Breece Hall rushed for 167 yards, including a 70-yard TD on Iowa State's third play from scrimmage. But he fumbled reaching for the end zone in a pile of players for the potential tying touchdown with about 6 minutes left and West Virginia's Alonzo Addae recovered. The play held up upon review.

West Virginia punted on its next series to give the Cyclones one last chance.

Brock Purdy ran for 14 yards on third-and-15 to the West Virginia 25. A false-start penalty then pushed Iowa State back. With no time left, Purdy threw into a crowd in the back of the end zone and the ball was batted away incomplete.

West Virginia, which had lost twice in the final minute on field goals to No. 4 Oklahoma and Texas Tech, finally got a close game to go their way.

“We finished on defense,” Neal Brown said. “If you think about it, we’ve been in that scenario that we just went through.”

Doege completed 30 of 46 passes for a season-high 370 yards. He threw two interceptions, one on a deflected pass.

Leddie Brown finished with 109 yards, including a pair of 2-yard touchdown runs. West Virginia improved to 9-1 when Brown surpasses 100 yards rushing over his career. He was held under 50 yards in two previous meetings against the Cyclones. Iowa State had not allowed a 100-yard rusher this season.

A year ago, West Virginia was held to 54 rushing yards against the Cyclones.

“I just feel like I had a little chip on my shoulder from last year," Leddie Brown said. "I just wanted to come out and run as physical as I can.”

Tied at 17 at halftime, the teams took turns trading big plays on both offense and defense.

After Bryce Ford-Wheaton was flagged for pass interference and the Mountaineers were penalized for a delay of game on consecutive plays, linebacker Jake Hummel then intercepted Doege and went 24 yards untouched into the end zone to put the Cyclones ahead 24-17.

Ford-Wheaton made up for his gaffe on the next series, reaching high to catch a 23-yard pass and tapping a toe in the back of the end zone for a touchdown that held up under review.

Hall swung the momentum right back to the Cyclones, going through a huge hole and dragging defenders with him on a 53-yard run that set up Purdy's 1-yard scoring run for a 31-24 lead late in the third quarter.

Doege hit Winston Wright with a 22-yard scoring dart on fourth down on the next series and, after an Iowa State punt, Ford-Wheaton made a 45-yard reception to set up Brown's 2-yard run for a 38-31 lead with 9:25 left.

Iowa State: The Cyclones converted just two of 12 times on third down. Big 12 receptions lead Xavier Hutchinson, coming off a 12-catch performance against Oklahoma State, had six catches for 51 yards against the Mountaineers.

West Virginia: The Mountaineers have won two straight since a bye week and have turned their season completely around following a three-game losing streak.

Iowa State will likely fall back out of the AP Top 25 poll after rejoining the rankings last week.