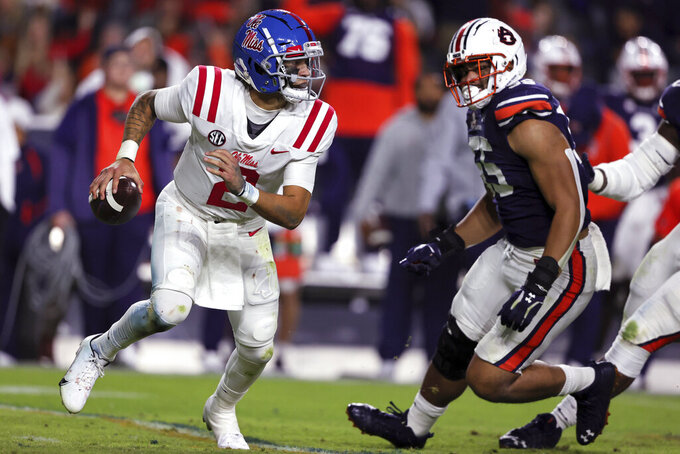 Mississippi quarterback Matt Corral (2) scrambles away from pressure by Auburn defensive end Eku Leota (55) during the second half of an NCAA college football game Saturday, Oct. 30, 2021 in Auburn, Ala. (AP Photo/Butch Dill)

Line: Mississippi by 8 1/2, according to FanDuel Sportsbook.

The Rebels are trying to rebound from a 31-20 loss at No. 12 Auburn. Liberty is seeking its first victory over a Southeastern Conference team and second over a Top 25 FBS opponent in four tries. Flames coach Hugh Freeze is also hoping for a triumphant return to Oxford, where he was head coach from 2012-16.

Two of college football's top quarterbacks match up, in Liberty's Malik Willis and the Rebels' Matt Corral. Both are semifinalists for the Maxwell Award given to the national player of the year. Willis and Corral have put up terrific passing numbers but are also running threats. They're also projected as potential NFL first-round draft picks.

Liberty: Willis has passed for 1,986 yards and 21 touchdowns against six interception. The transfer from Auburn has also run for 684 yards and nine touchdowns.

Mississippi WR Dontario Drummond's apparent hamstring injury against Auburn left the Rebels without their top three receivers for much of the game. Jahcour Pearson and Casey Kelly had their biggest games for Ole Miss at Auburn, but the Rebels would get a big boost if Drummond, Braylon Sanders or Jonathan Mingo can play.

Corral and Willis are the only two FBS quarterbacks ranked among the top 30 nationally for both passing and rushing TDs. Willis ran for a TD against Liberty in 2018 while at Auburn. ... That Auburn game is the only other time Liberty has played an SEC team. ... The Flames are 1-2 all-time against FBS Top 25 teams. Liberty beat No. 9 Coastal Carolina 37-34 in overtime in last season's Cure Bowl. ... Liberty ranks 10th in total defense and 13th in scoring defense, allowing 300 yards and 17.8 points per game.