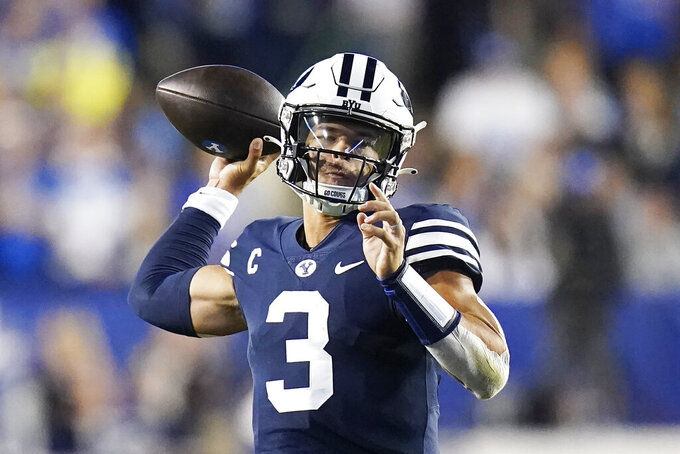 PROVO, Utah (AP) — Jaren Hall is a bit of a perfectionist. The BYU quarterback is always looking for some new way to improve his game.

Even after throwing for 337 yards and four touchdowns to lead the 19th-ranked Cougars to a 38-24 victory over Wyoming on Saturday night, Hall’s focus instantly turned to the moments where he fell short over four quarters.

“I have a handful of plays I can think of right now where I didn’t put us in a good situation,” Hall said. “All I’m concerned about is getting better.”

The redshirt junior had many more moments where he put the Cougars on his shoulders and propelled them past a tough Wyoming defense.

Hall became the 20th BYU quarterback to hit 4,000 career yards passing while completing a career-high 81.3% of his attempts and finishing with a career-best 211.0 pass efficiency rating. He also did it without making any major mistakes. Hall was sacked once and extended his streak of consecutive passes without an interception to 115.

Keanu Hill finished with a career-high 160 yards and two touchdowns on five catches to lead the Cougars.

Andrew Peasley threw for 154 yards and a career-high two touchdowns to lead the Cowboys. Titus Swen added 78 yards on 20 carries. Wyoming (3-2) lost to BYU for the ninth straight time in the series.

Wyoming generated just 93 total yards through the second and third quarters after gashing the Cougars on the ground during the first quarter.

“They did a better job of adjusting than we did,” Cowboys coach Craig Bohl said.

Hall completed eight straight passes to open the second half and threw for a pair of touchdowns to help the Cougars break open a close game in the third quarter. He hit Kody Epps on a 3-yard strike and then found Hill on a 9-yard toss to cap back-to-back nine-play drives and extend BYU’s lead to 28-10 entering the fourth quarter.

Wyoming cut the deficit to 28-17 on Peasley’s 19-yard toss to Treyton Welch on the first play of the fourth. BYU slammed the door shut on a potential comeback when Hill caught a 68-yard pass and dragged a would-be tackler into the end zone with him. His second TD catch gave the Cougars a 35-17 lead with 5:31 remaining.

“I appreciate the style of football that Wyoming plays because you can’t hide from it,” Sitake said. “You have to bounce back and face it and our guys answered the call.”

After going three-and-out on consecutive drives, BYU got on board with a 6-yard run from Christopher Brooks late in the first quarter. Hall set up the touchdown with a 47-yard pass to Hill and then a 32 yard toss off a flea flicker to Isaac Rex. The Cougars covered 91 yards in just four plays.

Wyatt Wieland’s 4-yard run capped off a 10-play Wyoming drive that chewed nearly five minutes off the clock and gave the Cowboys a 10-7 lead early in the second quarter. BYU answered with its own long scoring drive, covering 76 yards in 13 plays – culminating in a 3-yard catch by Brayden Cosper – and took a 14-10 halftime lead. Hall converted three third downs to keep the drive going with three passes each covering 13 or more yards.

Wyoming: The Cowboys ran the ball successfully against BYU early, averaging 5.8 yards per carry in the first quarter and totaling 69 yards rushing. That production dipped to 2.8 yards per carry during the second quarter – and 28 total yards – when the Cougars' defense adjusted to the Cowboys’ ground attack.

BYU: The Cougars finally found some life in their previously stagnant running attack. Five different players combined for 188 yards on the ground. Miles Davis, who entered the game as the No. 3 running back on BYU’s depth chart, led the way with a career-high 131 yards on 13 carries.

Davis burst down the sideline for a 70-yard run before being chased down at the Wyoming 5 to set up BYU’s final field goal late in the fourth quarter. It highlighted a brilliant night for the redshirt freshman. He finished with 152 all-purpose yards.

Davis savored having a bigger role after playing in only two games a season ago while battling injuries.

“Honestly, it was awesome,” Davis said. “With our o-line blocking how they were blocking, and our coaches trusting us, it just made it awesome.”

Sitake said he went with the hot hand to get the run game going. That meant Davis supplanted usual running backs Brooks and Lopini Katoa as the game progressed. Brooks finished with 10 yards on just two carries while Katoa had 17 yards on five carries.

Puka Nacua returned to action for BYU after missing two games with a sprained ankle only to suffer another injury. Nacua had to be helped off the field after making an 8-yard catch at the Wyoming 39 with 9:38 remaining in the fourth quarter. He did not return.

Nacua finished with 26 yards on three catches and also had a 14-yard run.

Beating a former conference rival could help BYU climb a couple of spots in the AP Top 25 Poll.