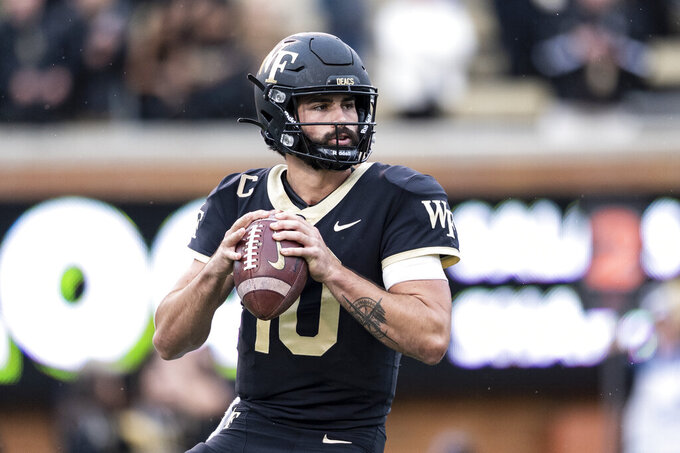 WINSTON-SALEM, N.C. (AP) — Wake Forest's offense has spent the past two weeks moving briskly up and down the field. The good news is the defense came along for the ride with a strong performance of its own after a rough few weeks.

And that has carried these 13th-ranked Demon Deacons to the best start in program history.

Sam Hartman continued his recent tear by accounting for five touchdowns to help Wake Forest beat Duke 45-7 on Saturday, keeping them and in the mix for bigger goals — think an Atlantic Coast Conference championship and being in the College Football Playoff race — than have typically been seen around these parts.

“It's enjoyable though. The success, we've earned this success. But nothing's going to be given for the rest of the year and we're going to have to keep showing up and keep being consistent.”

Hartman threw for 402 yards and three touchdowns, including a 38-yarder to Jaquarii Roberson on the first possession. He also ran for 61 yards and two scores for the Demon Deacons (8-0, 5-0).

It came a week after Hartman threw for five touchdowns and ran for a sixth score in a 70-56 victory over Army. That tied this year's team for the best start in program history set in 1944, nine years before the formation of the ACC.

Now Dave Clawson’s bunch owns a new milestone in what is becoming a special season for the league-leading Demon Deacons — a group using the motto of going from “good to great."

Mataeo Durant ran for 103 yards to lead the Blue Devils (3-5, 0-4). They got little out of their passing game with Gunnar Holmberg throwing for 110 yards and exiting briefly in the first quarter with an apparent injury to his left (non-throwing) hand, then didn't find the end zone until they late in a 45-0 game.

“We could pick a million things," Duke coach David Cutcliffe said. 'It's pretty obviously over and over and over where there are a lot of struggles. But the answers all lie within us, and we've got to find those answers.”

Duke: Cutcliffe's Blue Devils simply have to figure out how to score. Going back to Charlie Ham’s 22-yard field goal with 5:06 left in a loss to Georgia Tech on Oct. 9, Duke went 25 straight completed drives (uninterrupted by halftime or the game’s end) without scoring before reserve Riley Leonard's 2-yard keeper ended the streak with 7:17 left in the fourth quarter.

“Those guys in the locker room, there's no quit in those guys,” receiver Jake Bobo said.

Wake Forest: The Demon Deacons have one of the FBS’ top offenses, and they continued putting up points at a brisk clip. But they also got a bounceback performance from a defense that had been struggling for stops through October, first against Louisville and Syracuse before giving up 416 yards rushing against Army’s option-based running attack.

“We feed off their energy," linebacker Chase Jones said of the offense. “So when they're flying around making plays ... it's helps us play even better.”

The Demon Deacons are already the highest-ranked ACC team in the AP Top 25. They could inch up another spot or two with this win, but they're reaching the range where it's tougher to climb with fewer teams ahead of them to lose.

Duke moved the ball for much of the first half only to stumble multiple times when the time came to close drives with points. Most notably, that included two failed fourth-down tries as well as Durant having the ball chopped away from over his shoulder by Gavin Holmes on a solid gainer across midfield on the way to trailing 28-0 at the break.

Duke: The Blue Devils return home for another game against a ranked league foe, this one against No. 17 Pittsburgh next Saturday.

Wake Forest: The Demon Deacons visit North Carolina on Saturday in an unusual scenario: two ACC teams meeting in a nonconference series. They agreed in 2015 to a home-and-home series as their meetings became less frequent due to ACC expansion. Wake Forest won the first in 2019, while last year’s meeting won by UNC returned to its traditional league-game status after the ACC reshuffled its scheduling model due to the COVID-19 pandemic.