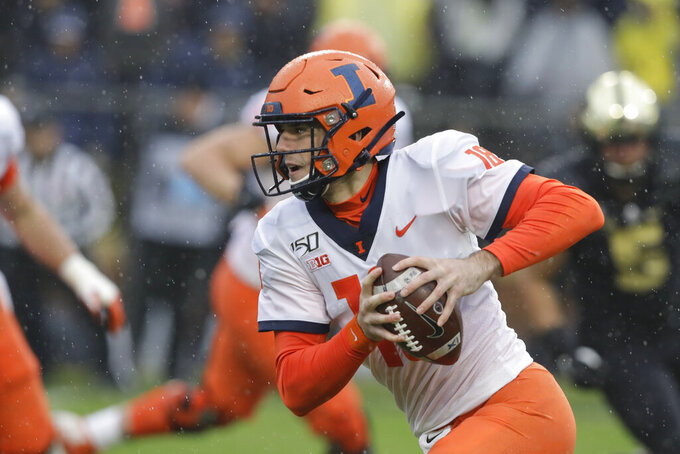 And why not? It has been nearly a decade since the Illini were a 20-point favorite against a Big Ten foe, but a one-point comeback win over then-No. 6 Wisconsin and a 24-6 thrashing of Purdue on the road last week have led to some exciting times in Champaign for a once-proud program that has been near the bottom of the standings far too often for its fans in recent years.

Smith knows his team must shake off the magic dust and focus on Saturday's game, which will be against Rutgers (2-6, 0-5 Big Ten).

"It seems like that (Wisconsin) game was a long time ago," Smith said. "I know the guys are really excited about it but getting to three Big Ten wins would be huge for our program."

Rutgers would seem to be a relatively easy mark. The Scarlet Knights have been outscored 207-14 so far this season and hasn't won a road conference game since 2017, when Illinois was the victim. They are coached by tight ends coach Nunzio Campanile after the Scarlet Knights fired coach Chris Ash four games into the season.

Campanile knows what his team faces.

"I think they (the Illini) are playing really hard," he said. "They have got really good speed. They have got talent. You know, they changed a little bit offensively from last year, probably more based on the quarterback than anything."

The Scarlet Knights find themselves up against an Illini defense that keeps getting better under Smith's tutelage. The former NFL head coach best known for his ferocious defenses with the Chicago Bears took over as coordinator a year ago when Hardy Nickerson resigned.

Illinois leads the nation in fumble recoveries (13), is second in forced fumbles (14), second in turnovers gained (19), fourth in defensive touchdowns (3) and ninth in the nation in tackles for loss per game.

"They are entertaining to watch," Campanile said. "The last two games on defense, they have been pretty dominant and they managed to get the points in the 30s almost every week. Last week they played in a monsoon, so that was tough. I think they are a pretty good team."

Just a few weeks ago, Rutgers was only the second Power Five conference team to be held to one (or fewer) pass yards in a game since 2000. Last week, in a win over Liberty, freshman Johnny Langan rushed for 118 yards on 21 carries, becoming the first Rutgers quarterback to rush for 100-plus yards since 1961. He also threw for a career-high 192 yard, finding wide receivers Eddie Lewis and Isaiah Washington for the first two touchdown passes of his career.

"The truth is that there's a major learning curve for (Langan), I mean there's some really tough defenses coming down the road," Campanile said. "I'm not certain that we are going to go out and three for 300 yards or something but I do think that the work he's put in in practice, he's startling to get those reps."

Illinois offensive coordinator Rod Smith emphasized the growth in the offense under graduate transfer quarterback Brandon Peters, whose arm and pocket presence have opened up the running game for the likes of Reggie Corbin and Dre Brown.

"I think we're in the early stages of gelling," Rod Smith said. "We constantly strive to get better, and we've signs that it's occurring. We just need to maintain our focus."

Corbin said his faith in Lovie Smith has never wavered, even during tough times.

"He's done a heck of a job keeping us looking at the positives and keeping us calm," Corbin said. "That's just coach Smith, man. He is a heck of a leader and it's great when you have a guy like that as your head coach."

Illinois leads the all-time series 3-2. The two teams split non-conference games in 2005 and 2006. The Illini have won two of the three Big Ten games since Rutgers joined the league.