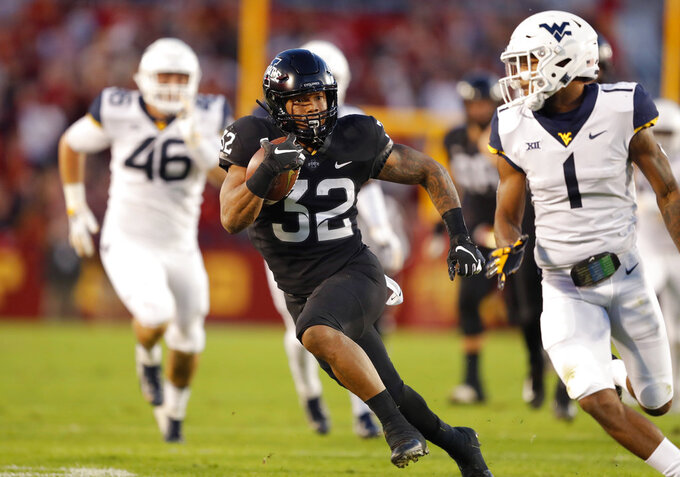 FILE - In this Oct. 13, 2018, file photo, Iowa State running back David Montgomery (32) runs from West Virginia cornerback Derrek Pitts Jr., right, during the first half of an NCAA college football game, in Ames, Iowa. Iowa State junior running back David Montgomery is leaving for the NFL. Montgomery announced through Twitter on Monday, Jan. 7, 2019, that he’s giving up his final year with the Cyclones to go pro. (AP Photo/Charlie Neibergall, File)

Montgomery announced Monday he is giving up his final year with the Cyclones to go pro. Montgomery, a first-team All-Big 12 pick in each of the past two seasons, will seek to become the first Iowa State back to be drafted since Troy Davis in 1997.

Montgomery ran for 1,216 yards and 13 touchdowns last season for the Cyclones, who finished 8-5 after losing to Washington State in the Alamo Bowl last month.

"The last three years have been nothing short of amazing," Montgomery tweeted. "I could not have asked for anything better than my experience at Iowa State. It has truly been the best decision of my life."

Montgomery was also instrumental in changing the culture at Iowa State under third-year coach Matt Campbell, who said that Montgomery will go down as one of the greatest players in school history

"The impact David had on the Iowa State football program, this university, and our great community is impossible to quantify," Campbell said. "But his legacy will extend far beyond the field."

Veterans Kene Nwangwu, Johnnie Lang and Sheldon Croney will all get a chance at replacing Montgomery as the starter. Four-star recruits Jirehl Brock and Breece Hall could eventually take over Montgomery's carries, perhaps as soon as next season.