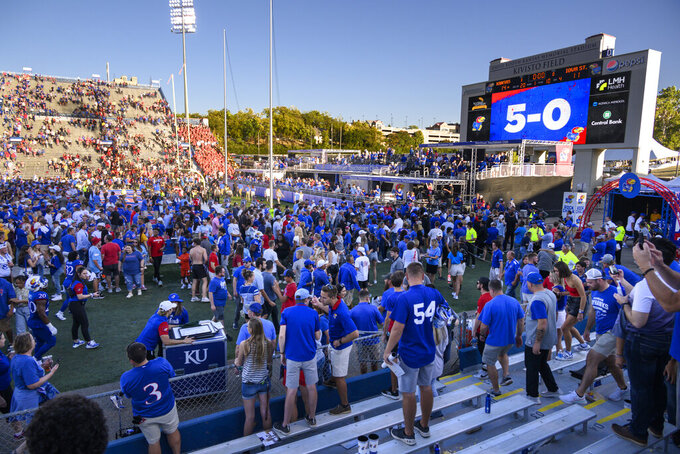 The University of Kansas announced plans Friday for long-awaited renovations to Memorial Stadium, the Anderson Family Football Complex and other facilities along with potential conference, entertainment and retail spaces.

The school has long studied ways to renovate the aging stadium, one of the oldest football venues in major college football, but support has been tepid as the Jayhawks struggled through year after year of losing seasons. The few upgrades that have taken place have been largely cosmetic, leaving the old concrete bowl almost entirely untouched.

But buoyed by a 5-0 start to the season, which has energized fans of the No. 19 Jayhawks, the school decided it was time to make public the behind-the-scenes discussions that have been taking place for the last several months.

"This project is unmatched in its vision to benefit a broad range of KU constituents while signaling a new era for Kansas football,” Jayhawks athletic director Travis Goff said. “Once complete, this project will ensure our football program has the facilities it needs to compete at the highest level and provide the best possible game-day experience for student-athletes and fans. Moreover, we are thrilled this project goes beyond football to benefit the entire university and the region.”

The Jayhawks face No. 17 TCU on Saturday in a showdown of unbeatens. It is the third consecutive sellout for the school, and ESPN has brought its popular “College Gameday” program to campus for the first time.

The project comes during a transformative era in college sports, where the appeal of schools amid conference realignment — even at Kansas, the defending men's basketball national champion — has been dictated almost entirely by football.

Kansas has chosen HNTB as the lead architect for its project. It will begin early next year with renovations to the football complex that are designed to improve the student-athlete experience, along with appealing to potential recruits, and include groundwork for the bigger renovation to the stadium.

The project, which is expected to cost more than $300 million, will be funded primarily through private donations, economic development funds, premium seating sales and future development opportunities on site.

“The intersection near 11th and Mississippi streets is a primary campus entrance for prospective students, alumni and guests,” Kansas Chancellor Douglas Girod said. “For these reasons, it’s the ideal location to develop a new gateway with multi-use facilities to better serve these audiences, generate revenue for academic programming, drive economic growth in the region, and reimagine our football facilities.”

The renovations to Memorial Stadium are likely to attract the most attention. The school is promising improved sight lines and seating experiences in the lower bowl, where fans are currently far from the field because of the existence of the since-removed athletics track, along with improved concourses, premium seating and other amenities.

Exact renderings of the stadium will be revealed later, once the school and partner Elevate Sports Ventures conduct fan focus groups and solicit other feedback from influential donors on what they envision in a football facility.

“Now more than ever, college athletics – and certainly sustained success in the sport of football – are critical to the health and vibrancy of our entire university community,” Goff said. “There is tremendous excitement for this project among donors and partners who believe in KU’s mission, and in partnership with KU Endowment, we’ll be reaching out in earnest to our benefactors and supporters to ensure this ambitious vision becomes reality.”