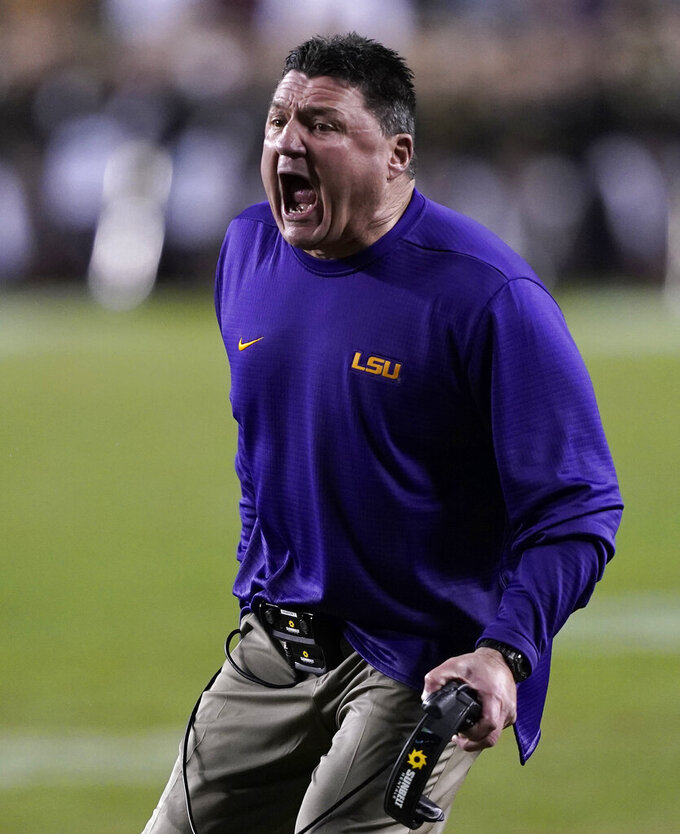 FILE - In this Nov. 24, 2018, file photo, LSU coach Ed Oregon yells at the officials during overtime of an NCAA college football game against Texas A&M, in College Station, Texas. Texas A&M won 74-72 in seven overtimes. The NCAA football rules committee has proposed giving replay officials more leeway to overturn targeting fouls and recommended that games reaching a fifth overtime period be decided by alternating 2-point conversion tries. The rules committee met in Indianapolis this week and announced on Friday, March 1, 2019, its proposed changes, including tweaks to kickoffs and blind-side blocks. The proposals must be approved by the football oversight committee in April. They would go into effect next season.(AP Photo/David J. Phillip, File)

The committee met in Indianapolis this week and the proposed changes also include tweaks to kickoff and blind-side block rules. The proposals must be approved by the football oversight committee in April. They would go into effect next season.

Two changes to targeting were proposed.

The first would allow replay officials to examine all aspects of the play and confirm the foul when all elements of targeting are present. If targeting cannot be confirmed, the call would be overturned, eliminating the option for the call on the field to stand. Targeting would still result in a 15-yard penalty and ejection of the player who committed the foul. Players ejected in the second half would still be required to sit out the first half of the following game.

The goal of the proposal is to call targeting more accurately and have fewer players ejected for borderline calls. LSU lost All-America linebacker Devin White for the first half of a game last season against No. 1 Alabama after he was ejected on a questionable targeting call in the second half of the previous game against Mississippi State.

The American Football Coaches Association had endorsed changing targeting to a two-tiered foul, with only the most egregious and intentional hits to the head being penalized with an ejection.

Steve Shaw, the NCAA's national coordinator of football officials, said the replay change will be a "surrogate for Targeting 1, Targeting 2."

Stanford coach David Shaw, the rules committee chairman, said he didn't see the proposal as a compromise, but as "another way to get the same goal."

"We want the discipline to be severe for helmet-to-helmet contact, but we also want it to be right," David Shaw said. "''That was kind of the idea of the two-tiered system. What we're saying with this rule is we're going to make sure of the ejection to make sure that it's right. The goal is the same, to make sure we are ejecting players properly for the right reasons and if they don't commit the foul then we're not going to eject them. I don't see it as necessarily backing down."

Under the second proposal, players who receive a second targeting foul during the season would be suspended for the entire next game, not just the first half. Steve Shaw said in the two conferences he oversees as coordinator of officials — the Southeastern Conference and Sun Belt — he can recall only one player in each league receiving multiple targeting penalties in a season.

The overtime rule change was proposed after LSU and Texas A&M matched a record by playing seven overtimes in their regular-season finale last year. The Tigers and Aggies combined to run 207 offensive plays.

On average, 37 Bowl Subdivision games have gone to overtime over the past four seasons. Most end after one round of possessions. Only six games per season have gone past two overtimes, but the concern was those rare marathons came with increased injury risk for players.

"We wanted to have something where we don't change the integrity of our system, which we all love," David Shaw said. "You pass four overtimes, you pass five overtimes and now you're worried about player safety."

Current overtime rules give teams alternating possessions starting at the opponent's 25-yard line. If still tied after each team has two possessions, teams must attempt a 2-point conversion after scoring a touchdown instead of kicking an extra point.

If the proposal passes, after the fourth possession, games would come down to a 2-point play shootout, with the first team to get a score and a stop winning.

The committee also proposed eliminating the two-man wedge formation on kickoffs that result in sprinting players running into double-team blocks. A proposal regarding blind-side blocks would make it illegal to attack an opponent with forcible contact from the blind side.

By Larry Lage, Reese Dunklin, Kathleen Foody And Mike Householder 11 hrs ago
13 hrs ago
14 hrs ago
Mark Scolforo 15 hrs ago
By Andrew Welsh-Huggins 15 hrs ago