No. 2 Ohio St starts home stretch against No. 9 Penn St 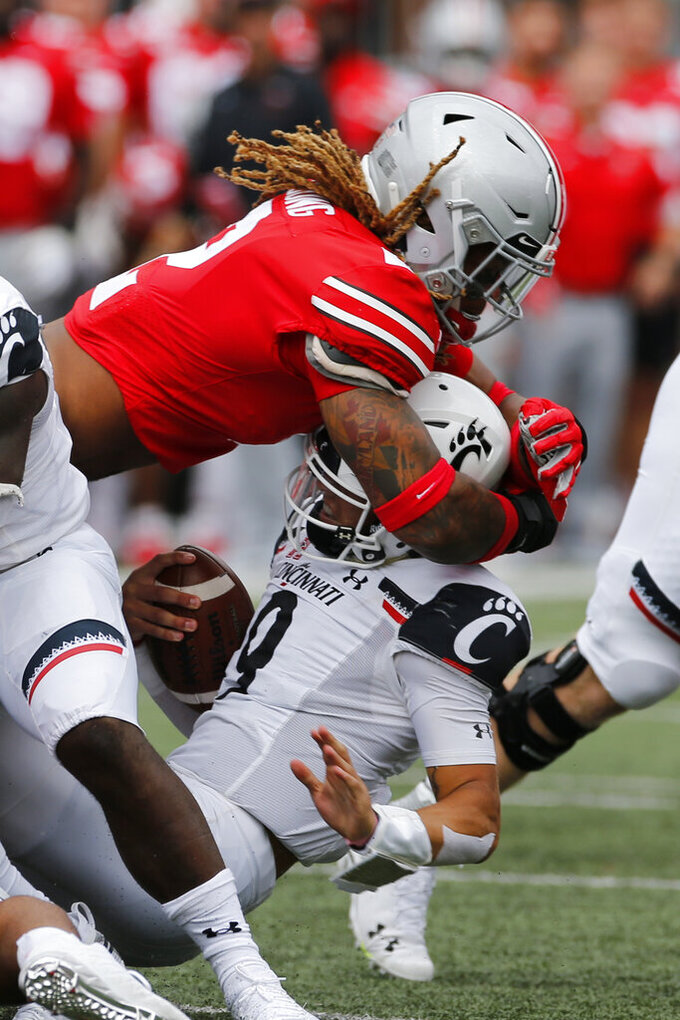 Penn State needs a victory to keep any hope alive of winning the Big Ten East. The way the Buckeyes are rolling, that seems like an unlikely scenario. All-American defensive end Chase Young returns after a two-game suspension for a defense ranked first in the country. Behind quarterback Justin Fields and tailback J.K. Dobbins, Ohio State scores early and often, while Penn State’s defense has shown some cracks in the past couple weeks. The Buckeyes have come from behind to beat Penn State the last two seasons.

Ohio State QB Justin Fields vs. Penn State’s defense. Fields continued his dream season last week, throwing for 305 yards and four touchdowns before sitting for most of the second half in the blowout. The Nittany Lions defense behind linebacker Micah Parsons must tackle better and contain Fields after struggling with unranked Indiana last week.

Ohio State: RB J.K. Dobbins is among the nation’s leaders in rushing yardage but like Fields he hasn’t played much in the second half. Against Rutgers he had 89 yards and a pair of touchdowns before giving way to his backups. Given a chance to play four quarters, he’s likely to have a huge game.

Penn State: QB Sean Clifford. The sophomore has performed well in his first season as a full-time starter. He’s thrown for 2,450 yards — second in the Big Ten — and 22 TDs and has rushed for another five scores. He’ll have to summon even more poise in the face of Ohio State’s relentless pass rush.

Ohio State’s average margin of victory of 41.7 is the best in the country. Clemson is second at 34.1. ... Ohio State has won 11 straight in the conference and 16 in a row overall. ... The Buckeyes joined 1971 Nebraska as the only teams in the last 100 years to win their first 10 games by 24 or more points. If the Buckeyes can beat Penn State by 24 or more, they will become the only team in the last 100 seasons to do so against its first 11 opponents. ... ESPN’s GameDay and FOX’s Big Noon Saturday crews will be in Columbus for the game.