No. 22 Missouri heads to Vandy, 1st road trip since opener 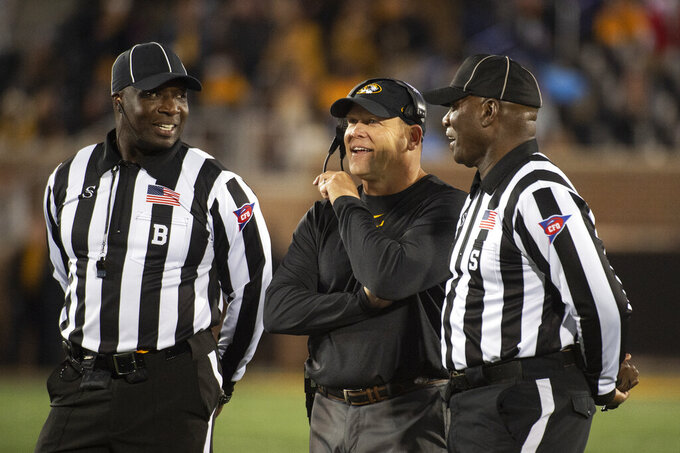 NASHVILLE, Tenn. (AP) — Missouri coach Barry Odom knows only too well the dangers of going on the road and how a few mistakes can prove very costly.

While some of his players my not remember that stunning loss at Wyoming to open this season, Odom hasn't forgotten.

"We're going to treat it just like it's our first game of the year on traveling, and we'll go through our travel tips and reminders because ... they all have a hard time remembering what we did yesterday, much less six weeks ago," Odom said.

The Tigers (5-1, 2-0 Southeastern Conference) could be undefeated if they had played better in that 37-31 loss to Wyoming. They've won five straight to turn things around on a long home stand and put themselves atop the SEC East. Another win Saturday at Vanderbilt would match their longest winning streak since 2017 when Missouri won its final six of the regular season.

Odom has talked to Missouri about preparing the right way after a 38-27 victory over Mississippi last week, then following through by executing to avoid any differences on the road than what they've enjoyed at home.

It'd be easy to overlook Vanderbilt (1-5, 0-3) with the Commodores coming off an unexpected 34-10 loss to UNLV last weekend. Vanderbilt came into this season with expectations of a second straight bowl berth under coach Derek Mason, and now the Commodores have six games left to try to salvage those hopes and avoid a losing record.

"We keep looking every week to simplify and see if you can put these guys in the best possible position," Mason said. "More is not better. More is more right now."

Some other things to know about Missouri and Vanderbilt:

The Tigers just finished the longest home stand in program history, which included wins over Ole Miss and South Carolina. Now they're going 35 days between home games thanks to a schedule that also includes road trips to Kentucky and Georgia separated by an open date. Then they'll be home to host Florida in a game that could decide the SEC East. Missouri is the only Power 5 team to go that long between home games this season and tied for the longest streak nationally with Ball State, Northern Illinois and Kent State.

Mason is very impressed with what Missouri offensive coordinator Derek Dooley has done with Kelly Bryant, helping the senior quarterback blossom as a passer. Bryant has thrown for 1,575 yards and is averaging 262.5 yards a game, and he ranks 28th nationally with 12 touchdown passes. Bryant is completing 65 percent of his passes, 31st in the nation. Mason says Bryant looks more like Dak Prescott of the NFL's Dallas Cowboys.

"He's been able to shed the moniker of just being a running quarterback," Mason said. "I've seen him throw the ball well from the pocket OK. Coach Dooley's done a great job of turning him into a pro passer."

With the Commodores struggling, Mason has opened up the quarterback competition. Riley Neal, the graduate transfer from Ball State, has started every game this season, and he is averaging 183.7 yards per game with four TD passes and three interceptions. Deuce Wallace has played in five games averaging just 37.4 yards per game.

Improving an offense that is at the bottom of the SEC in most categories and ranks among the nation's worst won't be easy against the Tigers. Vanderbilt is averaging 338.8 yards per game good for 110th nationally. Missouri isn't just among the SEC's best defenses but the nation's best. The Tigers rank sixth in total defense giving up 262.7 yards and 11th in scoring defense giving up 15.8 points a game. They've allowed opponents to get within 20 yards of the end zone just 12 times all season, best in the SEC and the eighth-fewest such chances in the country.

The Commodores still have Ke'Shawn Vaughn who's fourth in the SEC averaging 101.2 yards a game, and he's coming off his best game this season rushing for 140 yards with a 53-yard reception last week.