No. 23 Wake Forest has Hartman back for visit to Vanderbilt 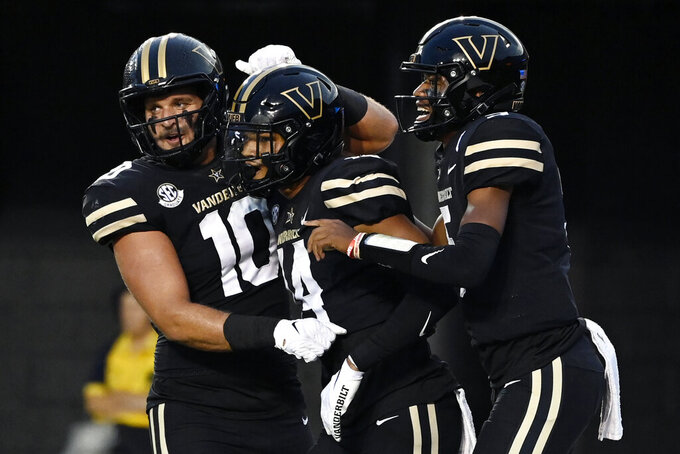 Vanderbilt wide receiver Will Sheppard (14) celebrates with tight end Gavin Schoenwald (10) and quarterback Mike Wright (5) after catching a pass for a touchdown against Elon in the first half of an NCAA college football game Saturday, Sept. 3, 2022, in Nashville, Tenn. (AP Photo/Mark Zaleski)

Line: Wake Forest by 13 1/2, according to FanDuel Sportsbook.

Wake Forest has QB Sam Hartman back from an injury that put his availability this season in question and puts the Demon Deacons back on track toward repeating their success of 2021. Vanderbilt already has matched the number of wins in all of coach Clark Lea's first season, so the Commodores can top that with a victory that would be their first 3-0 start since 2017.

Wake Forest’s running backs against Vanderbilt's run defense. Christian Turner had 100 yards rushing with two scores against VMI, while Justice Ellison had 80 yards in a strong tandem effort. There’s also the challenge for defenses of handling the Demon Deacons’ tricky “slow mesh” between the quarterback and the running back, with the QB holding the ball as long as possible to disguise whether it is a run or play-action pass.

Wake Forest: Hartman. The school announced Tuesday that the fifth-year quarterback was medically cleared to return after receiving treatment for a blood clot. Hartman missed the opener against VMI but guided Wake Forest to 11 wins and the Atlantic Coast Conference championship game last year at the helm of one of the nation’s top offenses.

Vanderbilt: QB Mike Wright. The third-year player has helped the Commodores total 105 points to start this season for an average of 52.5 points a game. Wright has totaled 10 touchdowns this season, topping the nine he combined for all of 2021.

Wake Forest’s 44-10 win against VMI marked the 17th time in 37 games since the start of the 2019 season that the Demon Deacons cracked the 40-point mark. ... Wake Forest linebacker Ryan Smenda is set to return to the lineup after missing the opener in a suspension for picking up a third targeting penalty last season in the Gator Bowl win against Rutgers. ... Receiver Donavon Greene had five catches for 63 yards in the VMI win, marking his return from a knee injury that sidelined him for all of the 2021 season.. ... Vanderbilt has won three straight in this rivalry. Wake Forest will be only the fourth ranked nonconference opponent to visit Vanderbilt since 1996. ... Vanderbilt RB Rocko Griffin is expected back after missing a game.