No. 6 Florida can clinch SEC East title by beating Tennessee 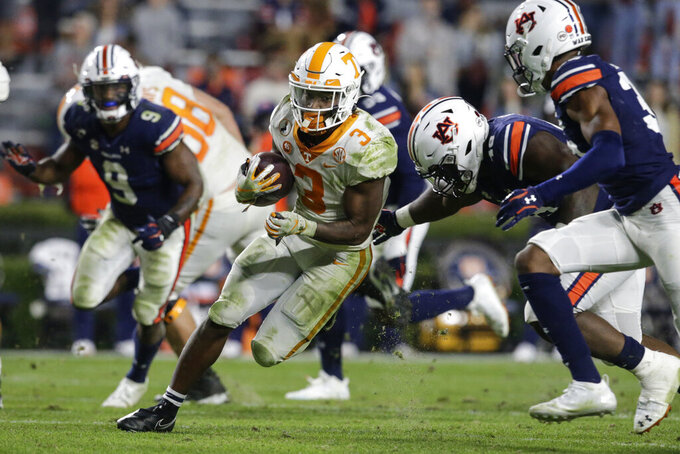 Tennessee running back Eric Gray (3) carries the ball during the second half of the team's NCAA college football game against Auburn on Saturday, Nov. 21, 2020, in Auburn, Ala. (AP Photo/Butch Dill)

Florida can clinch the Southeastern Conference Eastern Division along with a spot in the league championship game Dec. 19. They also need a strong finish to move up in the College Football Playoff rankings. Tennessee is trying to avoid the program's longest skid since 1988 when the Vols lost the first six games to start that season.

The Gators' high-powered offense against the Tennessee defense. Florida is second in the nation averaging 369.6 yards passing per game, and the Volunteers are 79th nationally allowing 243.6 yards per game. Tennessee also is giving up 31.3 points per game.

Florida: The Kyle-to-Kyle connection has been downright unstoppable this season. Heisman Trophy front-runner Kyle Trask has found star tight end Kyle Pitts for 11 touchdowns in 5 1/2 games. They developed their chemistry on the scout team three years ago and have climbed the depth chart together since.

Tennessee: RB Eric Gray. The sophomore ranks fourth in the SEC rushing for 93 yards a game, and he just posted his first back-to-back 100-yard rushing games. He's the first to do that in consecutive SEC games since Joshua Dobbs in 2016.

The Gators have won 14 of the last 15 meetings, including three in a row. Florida LB James Houston may have summed up his team’s recent run best, saying, “I personally never really played a Tennessee team that was too competitive against us.” ... Dan Mullen is unbeaten in seven games against Tennessee, going 4-0 as Florida’s offensive coordinator (2005-08), winning his only game against the Vols while at Mississippi State (2012) and bringing a two-game streak into Knoxville as Florida’s head coach. ... These teams played in September the past 18 straight years, and this will be the first December game in the series since 2001 when that game was postponed by 9/11. ... Four of the last six games were decided by 10 points or less. Florida has won the last two by double-digits. ... Tennessee will play its first game at Neyland Stadium in 42 days. ... Capacity will be at approximately 25%, and 23,394 attended the Alabama-Tennessee game in October. ... Tennessee dismissed outside linebacker Kivon Bennett from the team Tuesday hours after he was arrested.