No. 8 Iowa St vs. perennial champ Oklahoma for Big 12 title 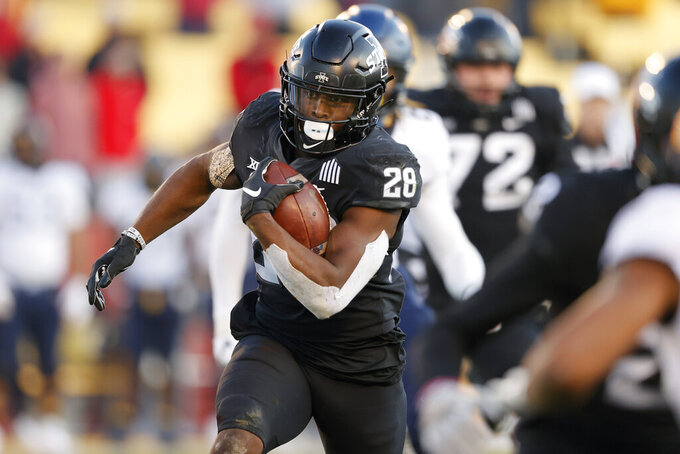 Iowa State running back Breece Hall runs the ball against West Virginia during the first half of an NCAA college football game, Saturday, Dec. 5, 2020, in Ames, Iowa. (AP Photo/Matthew Putney)

ARLINGTON, Texas (AP) — Charlie Kolar grew up a diehard Oklahoma fan but his hometown Sooners never offered a scholarship. The new coach at Iowa State did, before the Cyclones were championship contenders.

“It starts with Campbell and it bleeds to the rest of the guys on his staff. But I believed the plan they had, and the culture that they were trying to create,” said Kolar, a fourth-year junior. “It sounded different than a lot of other places.”

Kolar is now among many standouts for the Cyclones. Sophomore tailback Breece Hall is the Big 12's top rusher, Brock Purdy is a third-year starter and winningest quarterback in school history, defensive end JaQuan Bailey is the career sacks leader, and junior linebacker Mike Rose averages 8.1 tackles while tied for the conference lead with four interceptions.

“For me it’s always been about people," Campbell said. "I think that’s one of the great deals we’ve been able to kind of establish here, is to try to align this program with the right people and go about that same alignment in terms of developing and recruiting the right people who fit. ... That’s hard to do in our world.”

Oklahoma is in its 12th Big 12 championship game and no other team has played in more than six. The Sooners have been in all four since the title game returned after a six-season hiatus. They are 10-1 in Big 12 title games.

“Really, our team has grown in the mental aspect of the game more than anything,” center Creed Humphrey said. “We've had a lot of young players step up and doing really good things for us. The way our team has responded to adversity since then has been really good to see.”

Redshirt freshman Spencer Rattler, the fourth different starting quarterback for Oklahoma in a Big 12 title game in as many years, is the league's top passer with 279.1 yards per game. His 24 TDs are the most nationally for a freshman, with at least two in all but one game. He threw for 300 yards and two TDs against Iowa State.

“He is improving as we go," Riley said. “He is seeing things better as we go, without a doubt. Making a lot of improvements that I expected he would make and growing each week."

TOUGH TO RUN AGAINST

The Sooners have held their last three opponents to 36 total points — their fewest in a three-game stretch against Big 12 teams since 2009 — and only 198 yards rushing. They lead the Big 12 and are fourth nationally allowing only 88.1 yards rushing per game.

Hall's 139 yards rushing against them was the most by an opponent. He has averaged 135.7 yards per game, with eight 100-yard games and his 17 touchdowns include two against the Sooners.

Oklahoma made it to the College Football Playoff after winning the last three Big 12 title games. Based on the latest CFP rankings, it will be difficult for Iowa State or Oklahoma to make it this season with two losses.

Big 12 Commissioner Bob Bowlsby pointed out that Iowa State, No. 6 in the CFP rankings, could win its sixth game in a row, “which is the same number (of games) Ohio State has played the entire season.”

The Buckeyes (5-0) are fourth in the CFP rankings going into Saturday’s Big Ten championship game. Bowlsby said the selection committee needs to reconcile differences in the number of games played.

Oklahoma, No. 10 in the CFP, is going for its seventh win in a row.

“There’s a certain extent to where this is a war of attrition,” Bowlsby said. “When you play 10 or 11 or 12 games, you don’t always have the same personnel. You’re not always similarly prepared. You have games when you’re most ready to play, and there’s games where you’re less ready to play. That’s when good teams get picked off.”

Campbell and second-year Oklahoma defensive coordinator Alex Grinch were defensive teammates at Mount Union from 1999-2001, and were part of two NCAA Division III national championships together. Grinch was also part of a championship in 1998, and Campbell got another in 2002.

“They have good talent. This isn’t some Rudy story. I mean, this is not some, well, they’re just finding a way with bad players. They have good players.” — Riley, when asked about Iowa State’s defense, third in the Big 12 in total defense, right behind Oklahoma.