No. 8 Michigan tries to avoid letdown at Maryland 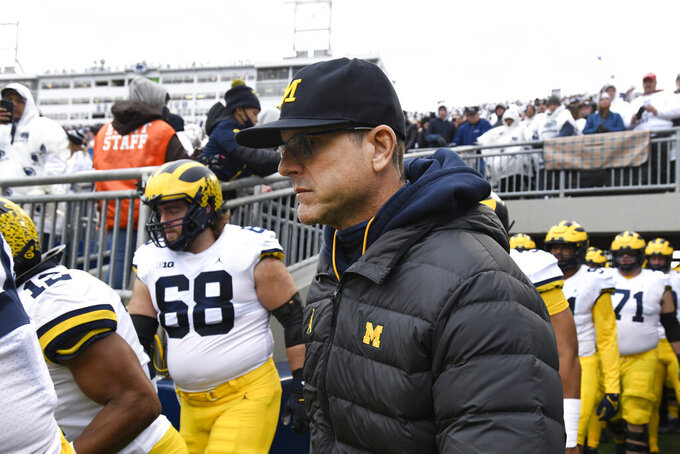 COLLEGE PARK, Md. (AP) — Even Maryland coach Michael Locksley seems to understand that No. 8 Michigan has bigger games on the horizon than this weekend's matchup with his Terrapins.

Perhaps the Terps can use that to their advantage when they host the Wolverines.

“They've done a great job of not beating themselves and putting themselves in a position where they're competing for a Big Ten title, which I think will come down to their game behind our game,” Locksley said. “I think they play Ohio State the week after us. Not to put that in their head, but I think they've got a big game coming up."

Indeed, the Wolverines do host the Buckeyes the weekend after this one, but if Michigan doesn't win at Maryland on Saturday, its Big Ten championship hopes could be gone. This is the type of game the Wolverines can ill afford to overlook, and it comes between a big victory over Penn State last weekend and the showdown with Ohio State.

Michigan quarterback Cade McNamara acknowledged players are thinking about the Ohio State game, adding that the challenge is to focus on Maryland this week.

“We can’t play in any championship without beating Maryland first,” McNamara said. “We’re obviously aware that a big game is ahead, but we have to be more focused on what’s ahead of us right now.”

Michigan coach Jim Harbaugh chose McNamara to start the season ahead of highly touted freshman J.J. McCarthy, but had been working McCarthy into games until keeping him on the sideline in the win at Penn State.

“He’s done nothing but be outstanding as the starting quarterback,” Harbaugh said when asked if McNamara is the team’s long-term quarterback.

Later during Harbaugh’s weekly news conference, he added some thoughts on what is always a talking point at Michigan.

Maryland is at .500 because the Terrapins have beaten the weaker teams on their schedule. Against better opponents, it hasn't been all that pretty.

Harbaugh has watched Maryland quarterback Taulia Tagovailoa and marvels at how dynamic he is throwing the ball.

“He just deals it,” Harbaugh said. “It has been fun to watch up until this point and now we’ve got to defend it.”

Maryland and Michigan had their game canceled last season because of a COVID-19 outbreak that impacted the Wolverines. The Michigan-Ohio State game was called off too.

Michigan leads the series 8-1, and Maryland's only victory came in 2014, the season before Harbaugh took over.

Maryland hasn't been in a bowl since 2016, but a four-game winning streak to start this season put the Terps in decent shape to end that drought.

“I haven't been to a bowl game since I've been here, and I would definitely like to do that, because it would extend my career and give me one more game," senior defensive back Jordan Mosley said. "Sometimes it's about the journey, not about the outcome, but in this case, I really want to go to a bowl."

If Maryland can't secure win No. 6 this week, the Terrapins will try to do it in their regular-season finale at Rutgers.