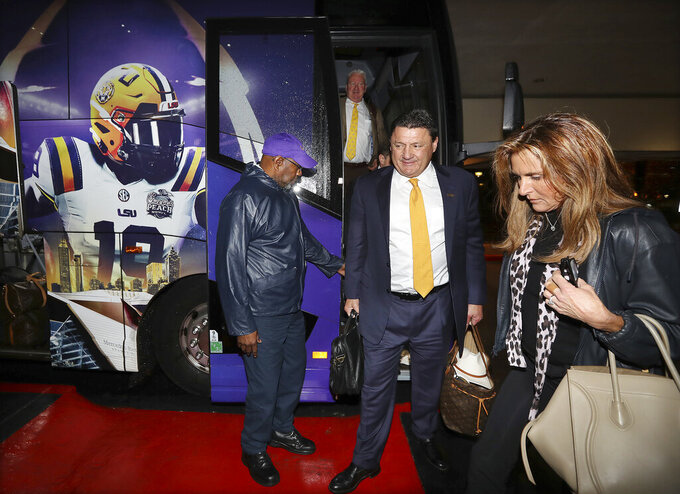 LSU head coach Ed Orgeron and his wife Kelly arrive with the team for the CFP Peach Bowl on Sunday, Dec. 22, 2019, in Atlanta. (Curtis Compton/Atlanta Journal-Constitution via AP)

ATLANTA (AP) — No team in the College Football Playoff has claimed more national titles than Oklahoma.

History, though, doesn't carry much weight in this year's field.

The Sooners are the clear outsider.

No. 1 LSU, No. 2 Ohio State and No. 3 Clemson have established themselves as the nation's best teams over the course of the long season. All three have 13-0 records. All three have sampled the top spot in either the CFP or Associated Press rankings.

Then there's fourth-ranked Oklahoma (12-1), which had to overcome a shocking loss to Kansas State and get a lot of help just to nab the last spot in the four-team field.

The Sooners are a whopping 13 1/2-point underdog heading into their Peach Bowl semifinal against LSU on Saturday, one of the widest betting lines in CFP history.

And, yes, that stings a bit.

That's certainly not the case.

Oklahoma is the school of Wilkinson and Switzer, of Sims and Selmon, of Mayfield and Murray — one of the most storied programs in college football history.

While the Sooners do have the longest national championship drought of the four teams — their last consensus title came during the 2000 season — they have finished No. 1 in the AP poll seven times, a tally topped only by Alabama (11) and Notre Dame (8).

In recent years, Oklahoma has maintained its place among the nation's elite programs. This will be the third straight year (and fourth time in the playoff's six-year history) the Sooners have earned an invitation.

Of course, they have yet to clear the next big hurdle: winning a semifinal.

In 2015, the Sooners were blown out by Clemson 37-17 in the Orange Bowl. Two seasons ago, there was a heartbreaking 54-48 overtime loss to Georgia in the Rose Bowl. A year ago, Alabama built a four-touchdown lead by early in the second quarter on the way to a 45-34 triumph in the Orange Bowl.

Those postseason flops are another reason to dismiss the Sooners as nothing more than an interloper.

“They kind of just forget us,” Motley said. “It's going to inspire us. We're going to sit in this corner over here and just work on ourselves and do our job. Y'all don't need to worry about us. Just know," he added, pausing to parse his words, "well, I don't want to talk too much, but we're coming."

At least the Sooners have some playoff experience.

This is the first time LSU has made the field.

“These college football (playoff) games have a little bit different vibe around them, a lot more hype, a lot more buildup,” said Oklahoma coach Lincoln Riley, looking for any edge he can get. “It doesn't make the difference by itself, but it's certainly an advantage for us, and we've got to handle it like it is.”

Then again, the Tigers have Heisman Trophy winner Joe Burrow and perhaps the most impressive win of any team this season, going into Tuscaloosa to knock off Alabama 46-41 — a game that signaled a shift of power in the mighty Southeastern Conference and helped keep the Crimson Tide out of the playoff for the first time.

After that kind of performance, not to mention victories over No. 5 Georgia, No. 6 Florida and No. 9 Auburn, it's hard to envision LSU being intimidated by anything it will face in the postseason.

LSU coach Ed Orgeron is embracing his team's status as a playoff rookie.

“If you ain't been there before, you're excited," he said. “Hey, we want to win this darn thing. You've got that newness to you, if you know what I'm saying. Would that be an advantage? Yeah.”

But, he quickly tacked on, "When the ball's kicked off, it's fundamentals. All that hype don't mean nothing. It's just like getting into a fight. After they throw that first punch, all that other stuff goes out the window."

Oklahoma's season was on the brink after that 48-41 loss at Kansas State in late October.

The Sooners bounced back to win their last five games, though it was tenuous all the way. They held off a furious comeback to edge Iowa State 42-41. They pulled off the biggest comeback in school history, overcoming a 25-point deficit to stun Baylor 34-31. They barely got by TCU, 28-24. They beat Baylor again in the Big 12 championship game, surviving a 30-23 overtime thriller.

Even then, Oklahoma still needed some help to get into the playoff. But everything fell into place when Alabama lost at Auburn on a missed field goal in the closing minutes, Utah fell to Oregon in the Pac-12 championship game, and Georgia was blown out by LSU for the SEC title.

Motley, a senior who has already been through two playoff losses, knows this could be his final game. As if that's not enough motivation, he's got a little extra drive to prove the prognosticators wrong.

Motley is still angry at himself for getting ejected in the second quarter of the Kansas State game for kicking an opposing player. His loss proved significant on a miserable afternoon for the defense.

“I completely blame that game on me," he said. ”I blatantly hurt my team by doing some selfish stuff in the heat of the moment."