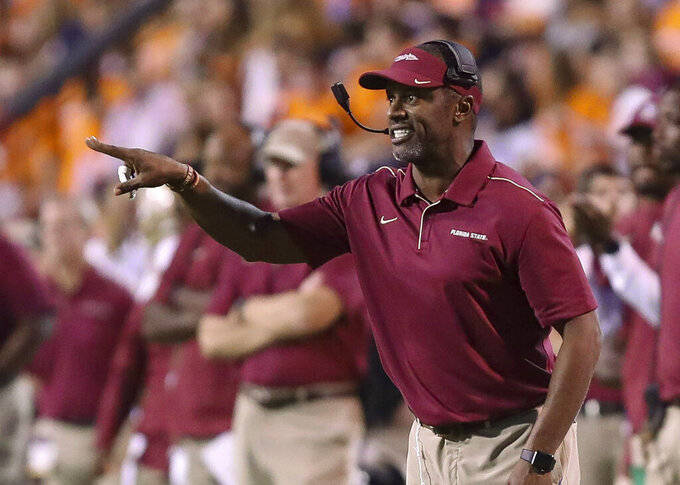 RALEIGH, N.C. (AP) — The mistakes — a false start here, a facemask penalty there — keep piling up for some Atlantic Coast Conference teams expected to contend for division titles.

Syracuse and Florida State were picked to finish behind reigning national champion Clemson in the Atlantic Division, while Miami was picked second in the Coastal. Yet they're off to shaky starts and rank among the most penalized teams in the nation. Their inability to get out of their own way at the start of league play has put them in an early hole.

"I think it's very telling of who you are as a team," said ACC Network analyst Eric Mac Lain, a former Clemson offensive lineman who played on the Tigers' national runner-up team in 2015. "At the end of the day, you're not going to win a lot of ballgames if you keep that behavior up. You're playing now (against) a second team within yourself, and you can't even do the little things right. So it's really tough."

Football coaches constantly talk about avoiding mistakes, even while acknowledging it's hard to avoid every penalty. But nothing seems to anger a coach more or can kill a team's momentum than mental mistakes or lack of focus — when an offensive lineman jumps for a false start or a team can't get lined up in time for a delay-of-game penalty.

Worse than those 5-yarders, there are the 15-yard personal fouls like hitting a ballcarrier out of bounds by failing to pull up at the sideline.

All become magnified in games — whether a matchup between teams of similar talent or an underdog trying to pull off the upset. It becomes a game within the game, which team is more disciplined.

The Seminoles, Hurricanes and Orange have had too many missteps.

Florida State and Miami each have committed 26 penalties, tied with the Big Ten's Michigan State and the Pac-12's Arizona for the most of any power-conference program. Syracuse is in the next group with 25.

The troubles are particularly concerning for Seminoles coach Willie Taggart, whose team escaped with a win against Louisiana-Monroe that was sandwiched between a season-opening loss to Boise State and last weekend's loss at No. 21 Virginia. Florida State ranks tied for 116th in the 130-team Bowl Subdivision, committing 8.67 penalties per game, and 119th in average penalty yards at 78.33.

The penalty flags against Florida State have come flying from all directions.

Four came on false-starts. Four more came when the Seminoles lined up offsides. Another five came on offensive or defensive holding calls. And there have been seven personal fouls, including three fourth-quarter ones against Virginia — prompting Taggart to lament "selfish penalties" and talk about doing more in practice to deter players from them because "it's killing this football team."

"We have things that we do internally to try to persuade our guys not to do that," Taggart said this week. "In the fourth quarter, fatigue did play a factor, and you can't do that, and that's part of winning football. You can't make those mistakes."

Things started badly for the Hurricanes and first-year coach Manny Diaz with 14 penalties for 118 yards in the season-opening loss to No. 9 Florida, though they had fewer in the loss at North Carolina (7 for 57) before beating overmatched Bethune-Cookman.

There are exceptions, such as the celebration after special-teamer Jimmy Murphy's first career touchdown rush last weekend in the 63-0 win over Bethune-Cookman. Murphy's exorbitant reaction drew a 15-yard flag, which Diaz understood — but didn't necessarily like.

"Even as funny as Jimmy Murphy's penalty was, we had to kick off from the 20-yard line," Diaz said. "So they all understand that anything they do on their own has an impact on the collective."

As for Syracuse, Dino Babers' Orange had an easy season-opening win against Liberty that overshadowed 10 penalties for 88 yards. The problem resurfaced with nine flags for 85 yards against top-ranked Clemson last weekend, including two 15-yarders in the opening quarter while falling behind 14-0.

Figuring out how to fix it isn't easy, either.

"Honestly, I couldn't even tell you (why) because I don't know myself," Syracuse defensive back Trill Williams said when asked about the penalties. "But it's tied in with discipline. We've got to get more disciplined."

It is a trademark for good teams and one reason Clemson, Virginia and Wake Forest are unbeaten.

Mac Lean said finding ways to avoid those mistakes have been an emphasis in Clemson's practices, down to having defensive backs wear boxing gloves that make them defend without the ability to grab a receiver.

It's about building habits that avoid mistakes, then being disciplined enough to stick with them.

Clemson defensive coordinator Brent Venables "just brings an intensity and a sense of urgency and a standard every single day that you have to match or you're not getting out there," Tigers linebacker James Skalski said, adding: "And like coach (Dabo) Swinney says too: 'It's all the little things, it's all the little things.' When you continue to do it every single day, under the lights on the big stage, it's just second nature to you."

By Emily Wagster Pettus 10 minutes ago
By Aaron Beard an hour ago
By Ralph D. Russo 2 hrs ago
2 hrs ago
By Tim Reynolds 3 hrs ago