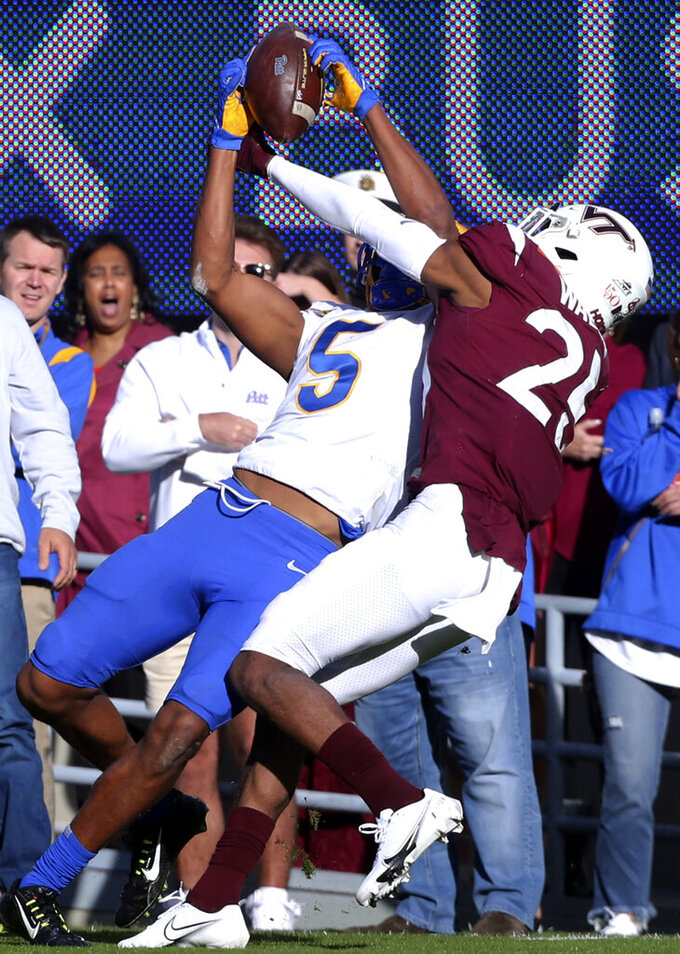 BLACKSBURG, Va. (AP) — Kenny Pickett threw two touchdown passes and rushed for a score to lead Pittsburgh to a 28-7 victory over Virginia Tech on Saturday.

Pickett threw touchdown passes of 8 yards to Gavin Bartholomew and 36 yards to Jared Wayne, and he scored on a 3-yard run — all in the first half — as the Panthers (5-1, 2-0 Atlantic Coast Conference) won their third straight game. Pittsburgh, which won in Blacksburg for the first time since 2015, moved into sole possession of first place in the ACC’s Coastal Division.

Pickett, arguably the leader for ACC Player of the Year at the season’s halfway point, now has thrown 21 touchdown passes and just one interception. He completed 22 of 37 for 203 yards.

“It feels great,” said Pickett, who won for the first time in three starts in Blacksburg. “I had this one circled for sure. We had probably one of the worst offensive performances two years ago (a 28-0 loss). It meant a lot to everyone to come in here and get a win.”

Israel Abanikanda rushed for a career-high 140 yards for the Panthers, who finished with 411 yards offense.

Virginia Tech (3-3, 1-1) finished with a season-low 225 yards. The Hokies’ lone score came on a 2-yard pass from Braxton Burmeister to Tayvion Robinson in the third quarter.

“It’s my job to get us to play as good as we can play – whatever that level is,” Virginia Tech coach Justin Fuente said. “At times, this season, we’ve hit that level. And really at no time today did we hit it. That’s not play-calling, that’s defensive scheme, that’s not special teams, that’s not players — that’s the head coach’s responsibility. I let them down, and I’m disappointed and mad at myself.”

Pittsburgh: The Panthers’ offense gets all the attention, but Pittsburgh’s defense deserves accolades as well. The Panthers have allowed just 35 points in the past three games and haven’t allowed more than 100 yards rushing in those three. This is a good squad that is positioned perfectly heading into the second half of the season.

Virginia Tech: Once again, the Hokies were abysmal on offense. Poor quarterback play, dropped passes, and an inability to run the ball killed drive after drive. The performance was so shoddy that Virginia Tech’s student section started leaving in the second quarter, and boos could be heard loudly throughout the game. Fuente, who entered the season on the hot seat, needs to find some answers quickly.

Abanikanda’s previous career high was 75 yards, which came in the Panthers’ blowout win over New Hampshire earlier this season. Pittsburgh leaned heavily on Abanikanda to put this game away, as 11 of his 21 carries and 63 of his yards came on a fourth-quarter drive that took 11:28 off the clock.

Pittsburgh: The Panthers play at home against Clemson next Saturday.