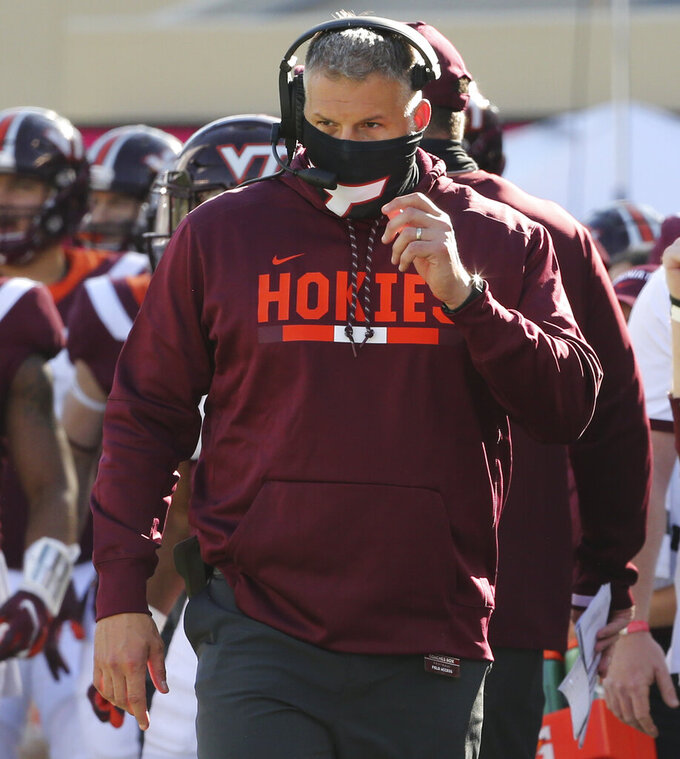 PITTSBURGH (AP) — It's supposed to be Senior Day for Pittsburgh wide receive DJ Turner and the nearly two dozen other Panthers scheduled to play at Heinz Field for the last time on Saturday when Pitt hosts Virginia Tech.

Technically, it still is. Maybe. It all depends. Because, well, everything during 2020 depends.

It depends on whether enough players on both teams pass their respective COVID-19 tests before kickoff, something that didn't happen for the Panthers last week when their trip to Georgia Tech was rescheduled for December. And, for seniors like Turner, it depends on whether he will exercise the option of returning to compete in 2021.

Turner won't make his decision until after the season is over, whenever that may be. If anything, 2020 has turned the phrase “play each game as if it's your last” from a cliché into a way of life.

“It kind of helps you not take any of these games for granted because you never know with everything that's going on,” Turner said. “You kind of appreciate it a little more. ... You just appreciate being on the field and playing football.”

When the Panthers (4-4, 3-4 Atlantic Coast Conference) have been on the field, it's been a mixed bag. A 3-0 start was followed by a four-game losing streak before a blowout victory over Florida State revived hopes of a strong finish. Then COVID-19 sideswiped them, leading to a weekend coach Pat Narduzzi said felt like a loss.

Virginia Tech (4-4, 4-3) is itself no stranger to COVID-19. An outbreak hamstrung the Hokies early in the year and the thrice-weekly testing has become a way of life.

“You can imagine all our players and staff that either get a text that’s good or a phone call that’s bad,” coach Justin Fuente said. “So we’re all dealing with uncertainty on a daily basis. This thing hasn’t gone away.”

What both teams hope for is a long enough reprieve to finish the season. What happens on Saturday could go a long way toward determining how the teams remember 2020, at least on the field. Virginia Tech has a 4-3 edge since Pitt joined the ACC in 2013, including a 28-0 romp in the rain in Blacksburg, Virginia, last fall.

The Panthers haven't forgotten the way they were pushed around.

“It's a different type of edge around here,” linebacker Chase Pine said. “I think we're losing the series to them, so this is a big one.”

Pitt stressed the need to improve its running game this year in an effort to help senior quarterback Kenny Pickett. It hasn't happened. The Panthers are 114th in the country in yards rushing per game (104.3). Running backs coach Andre Powell had hoped the crowded backfield picture would have thinned out at this point. It hasn't. His message to the group that includes Vincent Davis, A.J. Davis, Israel Abanikanda and Daniel Carter is simple.

“Practice better, play better,” Powell said. “The more plays you make, the more you play. That's just the way we go about it.”

Virginia Tech's Hendon Hooker has two of the top seven rushing totals by a quarterback this season, having gained 164 yards against Boston College on Oct. 17 and 156 yards against Liberty on Nov. 7. He gained 112 yards last week on 21 carries against Miami, including a 53-yard touchdown run, but also was sacked six times, dropping his yardage total to 59. He leads the Hokies with nine rushing touchdowns.

One Pitt senior who doesn't have much of a decision to make is defensive end Patrick Jones II. Jones leads the ACC with eight sacks and has become one of the emotional touchstones of a unit that is one of the top pass-rushing groups in the country. He's on his way to the NFL next season.

“He’s really become a leader,” Narduzzi said of Jones. “He’s grown so much from his freshman year to his senior year. He’s tough. He’s athletic. He can rush the passer. He gets some sacks every once in a while, which I know defensive ends love to get those sacks. He is special in every way.”

The Hokies are averaging 262.8 rushing yards to lead all Power Five schools that have played at least five games, while Pittsburgh is allowing a Power Five-best 78.5 rushing yards.

“They do a great job in the run game,” Fuente said. “I know there’s nobody in America that devotes as many hats in the box to the run game as Pat does. It makes it very very difficult to run the ball at all.”