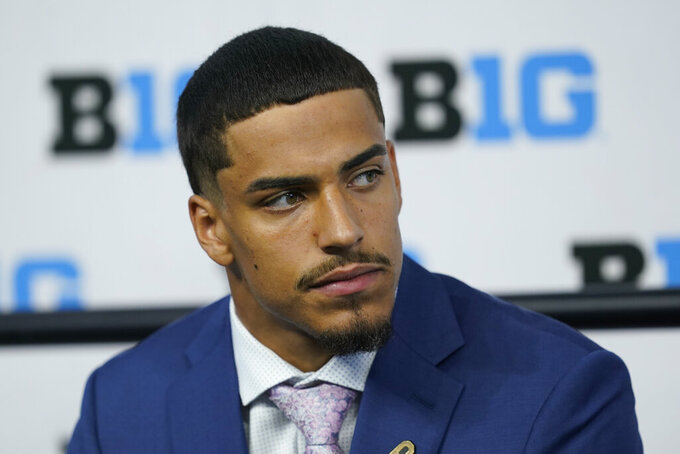 Brohm enters his sixth season in West Lafayette hoping his team can use the momentum to chase even grander goals in the wide open West Division.

“We haven’t gotten there, by any means,” Brohm said. “I do think we’ve got a hungry group. We’re looking forward to trying to make strides this year and improve upon that win total, but it’s going to be a challenge.”

After missing the postseason in 2019 and 2020, Purdue responded with a seven-win turnaround that was one of the FBS' biggest surprises. Purdue posted its first nine-win season since 2003, finishing one win short of making its first conference championship game appearance.

Brohm believes the key to replicating that success this fall is an even stronger defense, even though playmaking All-American defensive end George Karlaftis is no longer around. It's a challenge everyone seems to be embracing.

“We just want to be better than what we were doing last year," ball-hawking safety Cam Allen said. “We don’t really talk about being in the top 25 (in categories), but just going out there and doing your job. Then people on TV are going to see these guys are doing their thing.”

There's a big hole to fill on offense, too, with All-American receiver David Bell, a three-year starter, off to the NFL.

Purdue also has second-team all-conference quarterback Aidan O’Connell back for his sixth season. Some other familiar faces — leading rusher King Doerue, starting tight end Payne Durham and three returning lineman including tackles Eric Miller and Cam Craig — are joining O'Connell for another round through the Big Ten.

Brohm knows taking a giant leap will require contributions and improvement from every corner of the roster.

“Being aggressive on defense and trying to get the touchdown and make the interception and go for the fumble and make the sack, we want to try to do that more,” Brohm said. “We've got to be able to run the football no matter who's in there and those are things we've got to get better at."

The Boilermakers, who received votes in the preseason AP Top 25, certainly aren’t short on experience.

“You feel like you got, not cheated, because it was no one’s fault,” O’Connell said. “But COVID-19 took away a lot out of the college experience, so the sixth year gives us a huge benefit to play another year of college football and I think it’s very helpful to guys like me."

Semisi Fakasiieki has even one-upped that. The 24--year-old linebacker did not play in three of his college seasons but is starting his seventh college campaign with a chance to start.

Purdue intends to rely on depth to replace Karlaftis.

Coaches expect a combination of Kydran Jenkins, Jack Sullivan, Joe Anderson, Khordae Sydnor and Scotty Humpich, a transfer from Murray State, to bring consistent pressure off the edge. The interior line will be manned by a group of names such as Branson Deen, Lawrence Johnson, Prince Boyd Jr. and Sulaiman Kpaka.

One potential contributor is already out of the mix, though. Damarjhe Lewis could miss the entire season after suffering a serious ankle in practice.

Wright, a two-year starter, was declared academically ineligible in May. He had 57 receptions for 732 yards and seven touchdowns in 2021.

Miller suffered a season-ending knee injury during the first week of practice. He had 19 receptions for 165 yards last season. Paul Piferi should be No. 2 on the Boilermakers depth chart.

Only Purdue and Minnesota managed to avoid playing both Ohio State and Michigan this season. Penn State coach James Franklin is wary about opening at Purdue in prime time, a scenario that has led to some of the biggest upsets in school history.

If the Boilermakers pull an opening-night surprise and win at Minnesota on Oct. 1, a home win over defending division champ Iowa on Nov. 5 could position Purdue to win the West. ___