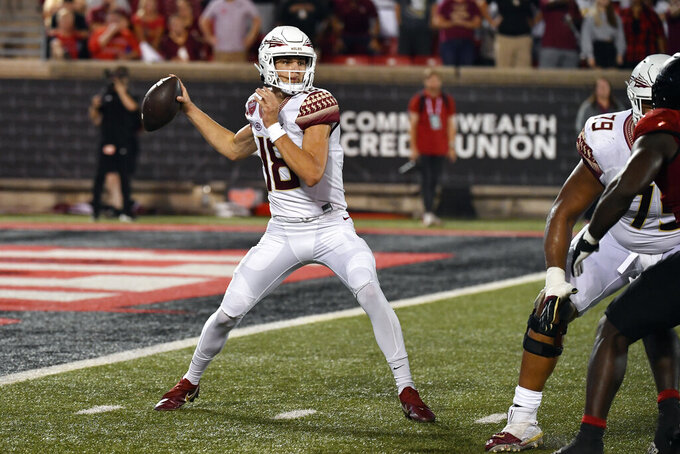 LOUISVILLE, Ky. (AP) — Pressed into duty on the road Friday night due to an injury, Tate Rodemaker lifted Florida State to yet another improbable victory.

This time, the Seminoles didn’t need a blocked extra point with no time left to win as they did two weeks ago against LSU. Instead, they relied on their backup quarterback to lead the way in a 35-31 come-from-behind victory over Louisville.

The sophomore came in after Jordan Travis suffered a lower left leg injury with a little more than four minutes left in the second quarter and Florida State down 21-14. All the Valdosta, Georgia native did was lead the Seminoles to three, 75-yard second-half scoring drives. The last came with 7:54 left with a sensational 2-yard catch in the end zone by Johnny Wilson that put the Seminoles (3-0, 1-0 Atlantic Coast Conference) up for good.

Rodemaker, who finished 6-for-10 passing for 109 yards with two touchdowns and an interception, said his mindset upon entering the game was to treat it like his work during the week.

“The first half I just kind of got thrown out there,” Rodemaker said. "The second half was, I just went out there and played my game. I just told myself, ‘This is like practice and I’d been doing it all week.’ I just transferred it over to the game.”

Florida State gained 260 of its 455 yards with Rodemaker taking the snaps. Treshaun Ward added 126 yards rushing on 10 carries for the Seminoles. Wilson finished with seven catches for 149 yards and both touchdowns from Rodemaker.

Florida State coach Mike Norvell said his team “willed” itself to the win, and that was due in large part to Rodemaker’s performance.

“That was an example of what this team is built on,” Norvell said. “It was a special night. That is one that I will remember forever. That was an incredible atmosphere. We'll talk about that heart and that identity.”

The Cardinals (1-2, 0-2) lost despite racking up 495 yards on offense. Malik Cunningham threw for 243 yards on 21-of-34 passing with a touchdown and an interception. The fifth-year senior also added 127 yards rushing and two scores on 17 carries.

Hindering the Cardinals’ effort were three turnovers, including a second-quarter fumble by Cunningham on a botched handoff at the Seminoles 12 early in the second quarter. Louisville, which held four leads in the game, also committed 11 penalties for 81 yards.

“It’s just very hurtful and disappointing, you know, not being able to win this game,” Louisville coach Scott Satterfield said. “I felt Florida State is a good football team, but we were right there and going toe to toe and in control of the game until late.”

The Cardinals had a chance to win the game after Ryan Fitzgerald missed a 36-yard field goal with 1:44 left, but Kevin Knowles II picked off a Cunningham pass at the Florida State 38 with 37 seconds left.

Friday’s game was a battle of attrition, with Travis’ injury being the most prominent injury. He left the game with just more than four minutes left in the first half after being sacked by Louisville defensive end Yaya Diaby, who had grabbed Travis by the legs on the play.

Travis walked off the field with trainers and went under the stadium. In the second half, he was on the sideline with crutches and a boot.

Before the injury, Travis, who started his college career at Louisville, had started hot, completing his first 11 passes. He finished with 157 yards, two scores and a pick on 13-of-17 passing.

Norvell said the team will evaluate Travis when the Seminoles return to Tallahassee.

Florida State: Losing Travis for any length of time could be a big blow for the Seminoles. However, for at least Friday night, Rodemaker’s heroics were enough to lead the comeback.

Louisville: It may be hard to call the third game of the season a must-win, but given the way the Cardinals season started, Friday’s game was one they really needed. The defense that showed up in the second half of the win at Central Florida last week failed to show up when needed in the second half on Friday.