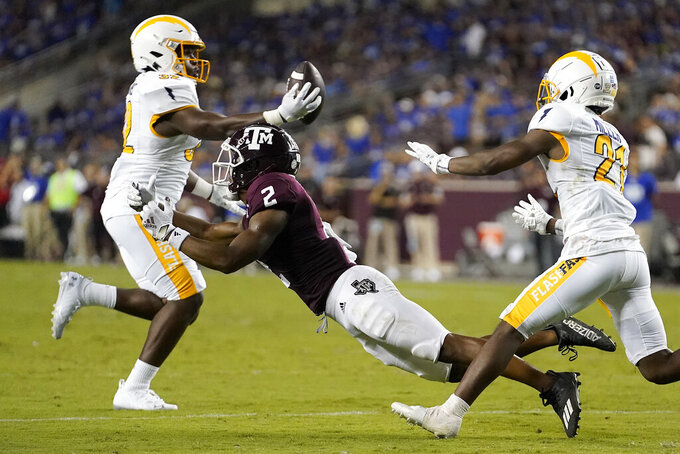 Kent State picked off four more passes in its win over VMI on Saturday and became the first team in 10 years with four interceptions in consecutive games.

The Golden Flashes, who opened with four interceptions in a loss to Texas A&M, already have surpassed their number of interceptions in 2019, when they had seven in 13 games. They played only four games in 2020 because of the pandemic.

Montre Miller had three interceptions against VMI, most by a Kent player since 2008. He and teammate Elvis Hines share the national lead with three picks apiece.

But the last team with four picks in consecutive games was South Carolina, which did it against Auburn and Kentucky the first and second weeks of October 2011.

Kent State finished in the top 50 in interceptions only once since it was second to Oregon in 2012. The Flashes had 23 picks that year.

The move from the FCS to FBS has been no problem for Western Kentucky's Bailey Zappe.

The Houston Baptist transfer leads the nation with 429.5 yards passing per game with 10 touchdowns against two interceptions. His 458-yard average in 2020 led all of college football.

Zappe has plenty of company from Houston Baptist. Zach Kittley moved with him to be his quarterbacks coach and offensive coordinator, and receivers Jerreth and Josh Sterns and Ben Ratzlaff also came along. Jerreth Sterns averages a team-leading eight catches for 139 yards and four touchdowns.

Kentucky's Chris Rodriguez Jr. was the fifth FBS player to rush for at least 200 yards in a game, setting career highs with 27 carries for 206 yards against Missouri. He tied his career best with three touchdown runs and also caught a 5-yard touchdown pass for his first collegiate receiving TD.

Rodriguez, the first Kentucky player since Benny Snell in 2018 to rush for 100 yards in each of the first two games, has 331 for the season. His 166 yards per game is second nationally behind Brandon Thomas' 169 for Memphis.

Nevada's Tristan Nichols had four sacks against Idaho State, the most since Charles Snowden of Virginia had four against North Carolina last Oct. 31.

LSU had 10 sacks against McNeese State, the most since Miami (Ohio) took down Akron quarterbacks 12 times in November 2019.

With wins over Eastern Illinois and East Carolina, Shane Beamer is the first South Carolina coach to start his first season 2-0 since Richard Bell in 1982. Beamer is the seventh Gamecocks coach since Bell, a list that includes Lou Holtz, Steve Spurrier and Will Muschamp.

Things didn't go so well for Bell after his team opened '82 with wins over Pacific and Richmond. The Gamecocks lost seven of the next nine and he was fired after the season.

Fordham's Ryan Greenhagen followed up his Division I-record 31-tackle performance against Nebraska with 28 stops in a loss to Monmouth.