STAT WATCH: Kincaid outing for Utah among best ever for a TE 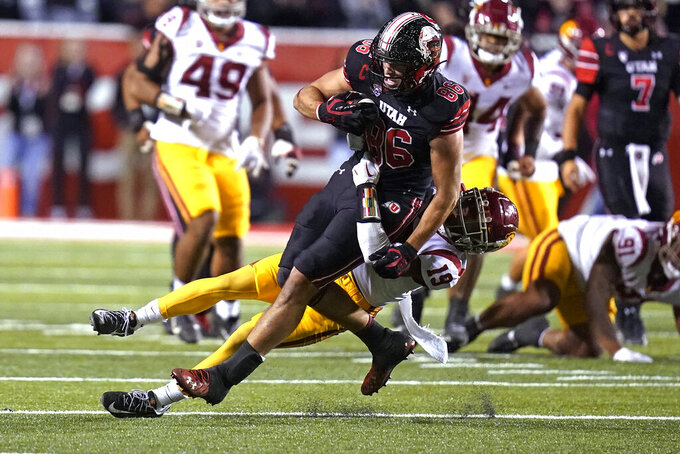 Dalton Kincaid turned in the best receiving performance of the year in Utah's win over Southern California — and the best in 40 years for a tight end.

Kincaid caught a national season-high 16 passes in Saturday's 43-42 win, the most by a tight end since Northwestern’s Jon Harvey had 17 against Michigan in 1982, according to ESPN Stats & Info.

Kincaid's catches added up to 234 yards, the fifth-most for any receiver in the Bowl Subdivision this season and most by a tight end since at least 2000, according to Sportradar.

Kincaid had 23 receptions over the first six games, never more than seven in any.

Cameron Rising and Kincaid connected every time Rising targeted him, and Kincaid had 109 yards after contact.

“He’s an easy guy to throw the ball to," Rising said. “You see what he did tonight. When he touches the ball, he makes plays and he extends them.”

The initial statistics report for the game listed Kincaid with 15 catches. He was credited with 16 following a postgame review.

KYLE THROWS FOR THIRD OF A MILE

Georgia Southern's Kyle Vantrease set the national season high and his career high with 578 passing yards against James Madison. Vantrease blew away his previous high of 409 yards against Nebraska five weeks ago.

Penix (365.7) and Vantrease (358.9) are 1-2 in the FBS in passing yards per game. They are the only two quarterbacks with 500-yard passing games against Bowl Subdivision opponents.

Jalin Hyatt's five touchdown receptions for Tennessee against Alabama were the most since the Crimson Tide's DeVonta Smith had the same number against Mississippi in 2019.

Only 13 players since 2000 have had five or more TD catches in a game, according to Sportradar.

All but one of Hyatt's catches went for TDs and he finished with a career-high 207 yards.

Old Dominion's Blake Watson turned in the season's 12th 200-yard rushing game when he ran for a career-high and school-record 256 on 18 carries against Coastal Carolina. He also scored three touchdowns.

Watson's big game jump-started an Old Dominion offense that came into the game 130th out of 131 FBS teams with 71.4 rushing yards per game. This week the Monarchs are up to 107th at 113.5.

WHAT ABOUT THAT DEFENSE?

Central Florida became the sixth team this season to score 70 points with its 70-13 win over Temple. The Golden Knights have a history of putting up big offensive numbers, so let's talk defense.

UCF has held nine straight opponents to 20 points or fewer, the longest active streak in the FBS, and allowed just nine points in the fourth quarter this season. Only Illinois, at seven, has allowed fewer points in the final 15 minutes of games.

IT DOESN'T TAKE MUCH

New Mexico State's 225 total yards in its 21-9 win over New Mexico were its third fewest in a win since 2000, according to Sportradar.