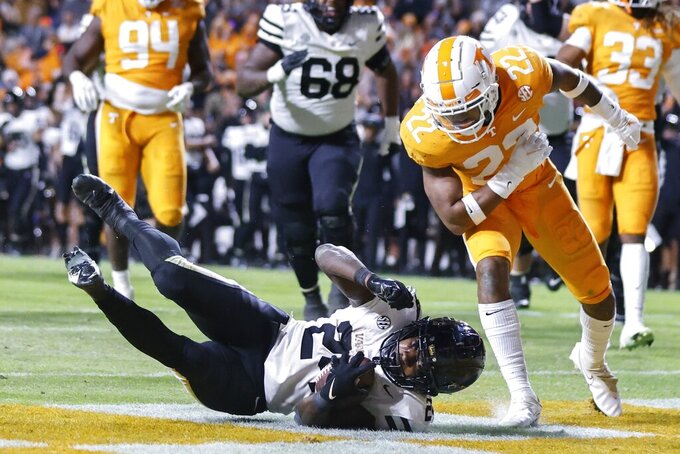 Vanderbilt running back Rocko Griffin (24) dives into the end zone ahead of Tennessee defensive back Jaylen McCollough (22) during the second half of an NCAA college football game Saturday, Nov. 27, 2021, in Knoxville, Tenn. (AP Photo/Wade Payne) 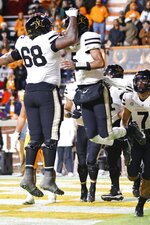 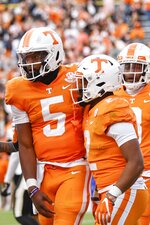 KNOXVILLE, Tenn. (AP) — Josh Heupel passed both tests among the SEC Class of 2021.

Hendon Hooker threw for 156 yards and two touchdowns and ran for 75 yards for the Volunteers (7-5, 4-4). Jabari Small rushed for 103 yards two touchdowns and Jaylen Wright had 113 yards and a score as the Vols grabbed bragging rights over their intrastate rival Commodores (2-10, 0-8).

“From the time I got here, with all the uncertainty, (the veterans) formed a rock-solid foundation,” Heupel said. "Our players grew throughout the season. They're great competitors, which is the first thing you have to have.

“I never put a ceiling on this group. This group of young men, no doubt they'll be a success in life. Football prepares them for life. I'm grateful and indebted to them for their buy-in.”

“The biggest thing with Heupel is that he trusts all his players,” Tillman said. “He believes in his players. He trusts me to put me in a position to make plays. I try not to disappoint him.”

After taking a hit on an option play, Hooker left with 8:03 left in the fourth quarter holding his left hand. He was replaced by Joe Milton. Heupel did not address the injury after the game.

The Vols and their high-octane offense had their six scoring drives total 11:26 time of possession.

“I have never been more energized for where we are headed," Vanderbilt coach Clark Lea said. “If you look at the nucleus of the team returning and think about how much we know about what is needed and what we need to do to strengthen the program.

"I am so excited about where we are headed and we have a lot of opportunity for exponential growth this off season. I told the team in the locker room after the game that the clock has already started on year two and Team 2.”

“The play prior to (the interception) they ran the exact same play,” Jackson said. “I jumped it. My mindset was that I had to score.”

Tennessee right tackle Cade Mays missed the game with an injury to his left foot...Vols quarterback Hendon Hooker has now thrown a touchdown pass in 11 straight games, tying Erik Ainge (2004-05) and Peyton Manning (1996) for fourth place all-time...The Vols had a two-play 33-second scoring drive, their quickest march of the season.

After a strong start to his season, Tennessee running back Tiyon Evans went down with an injury. He missed the Vols' last four games. Friday the junior entered the transfer portal. After two seasons at Hutchinson Community College, Evans enrolled at Tennessee in January, 2021. He played in seven games, starting two. He collected 525 yards and six touchdowns. The last game he played was against Kentucky.

Vanderbilt: In a battle of first-year SEC coaches, Tennessee's Josh Heupel has made more progress toward getting his program headed in the right direction than Clark Lea of Vanderbilt. The Commodores have youth on both sides of the ball, forming a foundation on which to build.

Tennessee: In the final two weeks of the season, against opponents that are significant underdogs, Heupel stressed to his team that it must maintain the high intensity level. Convincing victories showed that the Vols were listening.

Vanderbilt: The Commodores have paradise in their future — though it might be the distant future. Vanderbilt's next competition will be Aug. 27, 2022 against Hawaii in Honolulu.

Tennessee: The Vols' next game is up in the air. They will be part of the SEC's bowl schedule that will be determined at a later date.