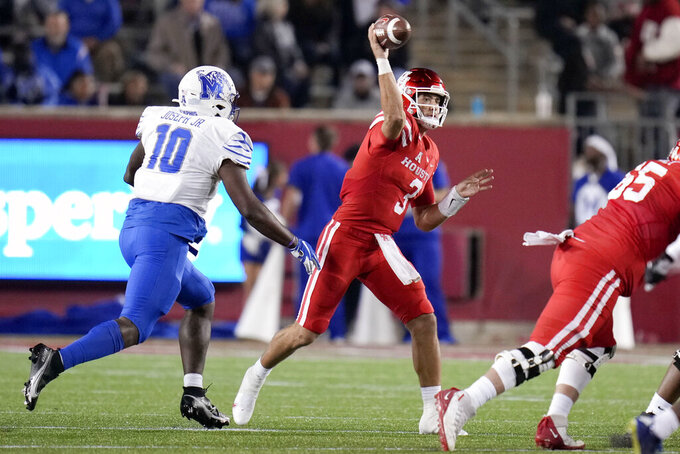 HOUSTON (AP) — Clayton Tune threw for 264 yards and a touchdown and ran for another score as No. 17 Houston extended its winning streak to 10 games with a 31-13 victory over Memphis on Friday night.

Tune tossed a 19-yard touchdown pass to Nathaniel Dell in the second quarter but was picked off twice, the first snapping a streak of 192 attempts without an interception. The QB also rushed for 59 yards, including a 20-yard touchdown as the Cougars (10-1, 8-0 American Athletic Conference) built a 21-3 lead at halftime.

“We just hammer through whatever adversity we are faced with,” Tune said. “Whatever challenges it is for that week, we keep hammering and playing. Don’t let outside noise and distractions get in the way of what we are trying to do. It just speaks to the character of this team and what we know we can do.”

Houston went undefeated in conference play for the second time in school history, matching the 2011 team.

“We are a good team,” Houston coach Dana Holgorsen said. “We finished the American 8-0. We’ve won 10 in a row. It’s hard to win in college football. It’s hard to win every week ... I’m very proud of this football team.”

“There’s frustration, there’s hurt, there’s anger in the locker room and there should be,” Memphis coach Ryan Silverfield said. “I’m all those things. … It starts with me, and I am frustrated. We’ve got to find a way. Our players are frustrated, and I understand. We didn’t execute the way we needed to, the way we are capable of.”

Asa Martin caught a 5-yard touchdown pass from Henigan, and David Kemp made a 22-yard field goal to cut the lead to eight early in the fourth quarter.

Following two straight three-and-out drives by Memphis, Dalton Witherspoon connected on a 34-yard field goal with 3:24 remaining to put Houston up by 11.

Memphis: The Tigers closed within eight and had momentum, but could not finish, gaining 23 yards in the fourth quarter. Memphis finished 2 for 14 on third downs and 2 for 4 on fourth downs.

“Our kids haven’t quit,” Silverfield said. “They’re fighting, they’re caring, they’re working. It’s just not showing in results, and that’s my job to figure out a way to get that done.”

Houston: Marcus Jones had two interceptions, his fourth straight game with at least one pick. The Cougars were called for 11 penalties totaling 122 yards, including an unsportsmanlike conduct penalty on Holgorsen. He called the penalties “mind-blowing."

Houston junior linebacker Donavan Mutin was taken off the field on a stretcher after tackling Martin with 12 minutes remaining in the first quarter. After the tackle, Mutin’s teammates immediately surrounded him as trainers and personnel rushed on to the field. The entire Houston team came out near the hashmarks on the far side and watched as Mutin was strapped on a backboard, loaded on to a stretcher and wheeled off the field.

Mutin was taken a hospital as a precaution and was alert and talking, the school announced.

Mutin entered the game tied for the team lead with three forced fumbles. He has five tackles for loss, including two sacks.

“Donnie is our emotional leader and team captain,” Holgorsen said. “We were out there for a while. In my 11, 12 years of being a head coach, I’ve never had that. I’ve never had a kid taken off on a stretcher. That was dire. He was moving and talking toward the end of it. It took him awhile to wake up. He was breathing.”

The Cougars should at least maintain their position in the poll.

Houston: At UConn on Nov. 27 to end the regular season.