Wake Forest looks to clean up execution vs Norfolk State 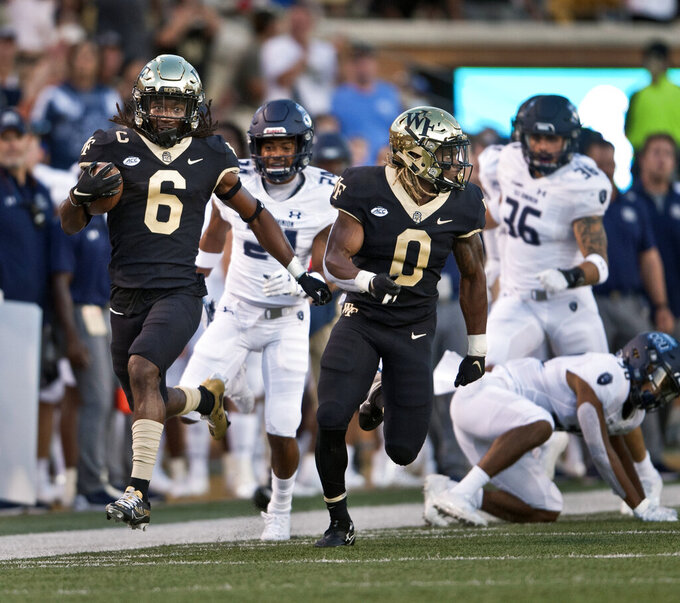 Wake Forest opened the season with a lopsided win featuring statistical balance between its rushing and passing games.

Yet coach Dave Clawson wants to see better offensive execution after an “uneven” performance when his Demon Deacons host Norfolk State on Saturday in their second straight home nonconference game.

“I’m disappointed we didn’t run the ball a little bit more consistently,” Clawson said of the win against Old Dominion. “Clearly the short-yardage plays were an issue. … I thought it was a very uneven Game 1 performance.”

Wake Forest (1-0) had no trouble beating the Monarchs 42-10. The Demon Deacons ran for 164 yards and threw for 188, got a 99-yard kickoff return for a touchdown from Ja’Sir Taylor and got to dive into their bench into the second half.

But Clawson focused instead on plays like Christian Beal-Smith’s stuffed fourth-and-goal from inside the 1 on a wildcat keeper to end the first half. Or the fact that the Demon Deacons failed to convert any of their three fourth-down tries.

He wants to see better this week against Norfolk State (0-1) considering the Demon Deacons host Florida State next weekend in their Atlantic Coast Conference opener.

The Spartans, a Championship Subdivision team that didn’t play last season due to the COVID-19 pandemic, are coming off a 49-10 loss at Toledo in their opener. That was also Norfolk State’s first game under new coach Dawson Odums, which will follow a game against a Group of Five conference program by facing a Power Five one.

“When you’ve been off and you play up, you’re going to really see a difference in that layoff,” Odums said. “We had a chance to play up in talent and (Toledo) had played in the fall, and you could see – it was a difference in timing and just adjusting.”

Some other things to know about Saturday’s Norfolk State-Wake Forest game:

Wake Forest receiver Taylor Morin pointed to another area for the offense to improve: protecting the football.

The Demon Deacons were one of the nation’s best at avoiding turnovers last season until an extended late-season COVID-19 pause, losing just one in the first seven games. They had three fumbles in the Old Dominion game and lost one, a carry by Christian Turner into the red zone in the third quarter of a 35-3 game.

“We had a couple of instances where the ball started getting loose,” Morin said. “And as a program, we pride ourselves on taking care of the football.”

Norfolk State had two punts blocked and returned for touchdowns in the first half, so that offered a glaring area for improvement for Odums after Week 1.

“I thought offensively and defensively we did some really good things,” Odums said. “We’ve got to shore up our punt team.”

Wake Forest receiver Jaquarii Roberson has managed at least one touchdown catch in five straight games. If he does it again Saturday, he’ll move into a tie for the second-longest such streak in program history.

Wake Forest hasn't stumbled in a long time in a matchup like this. The Demon Deacons have won 15 straight games against FCS opponents dating to 2000.

The Spartans are playing an ACC opponent for the first time in program history. The Mid-Eastern Athletic Conference program is 0-14 all-time against Bowl Subdivision teams.

“The good thing about it is that we know going forward, we’re not going to see two teams like the first two teams we play,” Odums said.