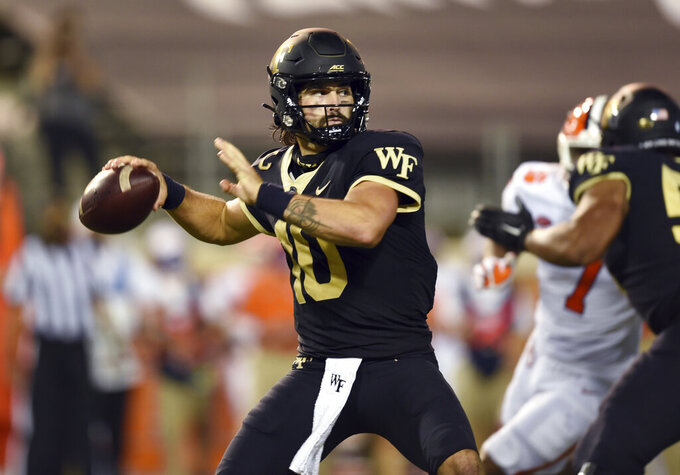 Wake Forest has veterans back playing under an established coach who has guided the Demon Deacons to the first run of five straight bowl games in program history. The challenge is to keep taking new steps despite the challenges in their own Atlantic Coast Conference division.

“Whether it’s New Year’s Day bowls or being in contention to win the ACC Atlantic (Division), obviously that’s a very high standard in the ACC,” eighth-year coach Dave Clawson said. “But that has to be our goal.”

The good news for Wake Forest is the Demon Deacons have plenty to work with on both sides of the ball. Nine starters are back on offense and defense, including quarterback Sam Hartman, top rusher Christian Beal-Smith and top receiver Jaquarii Roberson.

The Demon Deacons (4-5, 3-4 ACC last year) were headed toward a winning record before stumbling late in a season altered by the COVID-19 pandemic. After blowing a 21-point third-quarter lead in a loss at North Carolina, they entered a pause of team activities that prompted a shuffle of the schedule. Wake Forest returned with a loss at Louisville and then to Wisconsin in the Duke’s Mayo Bowl to end the year, ending with three fewer regular-season games than the maximum allowed.

“The fourth quarter we were just trying to finish,” Clawson said. “I think we take pride that we did finish. We didn’t finish the way we wanted to competitively.”

Clawson figures there’s already at least one boost in that the team has had its full offseason schedule of strength and conditioning, a critical piece for a program that leans on developing players instead of securing the highest-ranked recruits to compete like six-time reigning ACC champion Clemson within the division.

Some other things to know about the Demon Deacons for 2021:

The high number of offensive returnees at least gives the Demon Deacons a shot at repeating a largely turnover-free style of play from last year. They had just one turnover through their first seven games before losing six in the final two games, yet still finished as one of the Bowl Subdivision's leaders in turnover margin.

Hartman, a redshirt sophomore, has 22 games of experience and was one of the biggest reasons why the Demon Deacons avoided mistakes nearly all year. In fact, he had thrown just one interception all year before his unexpected struggles with four against Wisconsin.

“Obviously it didn’t end the way anyone would want,” Hartman said. “So I’d say it’s learning how to be consistent throughout, that’s physically and mentally. I’ve been working on that a lot, on the mental side of the game.”

Beal-Smith is back after running for a team-best 732 yards last year. He had served as the lead back in a 1-2 punch with Kenneth Walker III, who ran for a team-high 13 touchdowns. Michigan transfer Christian Turner and second-year freshman Justice Ellison could be next up.

“We worked hard all summer,” Kamara said of the defensive-line returnees. “We pushed each other. Like I said, it’s competitive. Everybody wants to be great.”

The Demon Deacons open at home against Old Dominion on Sept. 3 and play their league opener against Florida State on Sept. 18.

Wake Forest also has a challenging finish. First the Demon Deacons visit 10th-ranked North Carolina (Nov. 6) in a matchup designated as a nonconference game — which also happened in 2019 — with the schools playing each other less frequently amid the league’s scheduling rotation.

They then host North Carolina State on Nov. 13, visit Clemson (Nov. 20) and close at Boston College on Nov. 27.