AP Was There: Huskers beat Sooners in '71 'Game of Century' 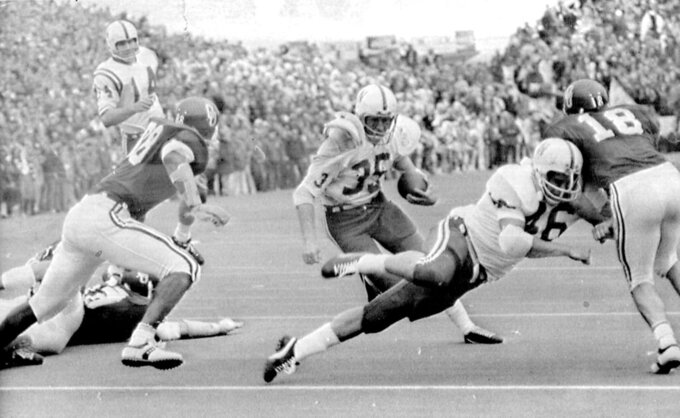 College football's storied history includes a dozen or more games considered among the best ever played. Some have been labeled “Game of the Century” — a title that is reused time and again.

The clash between No. 1 Nebraska and No. 2 Oklahoma in 1971 is one of those games and it lived up to the billing. Many fans remember the spectacular punt return touchdown from Nebraska's Johnny Rodgers while others remember the offensive showcase games for Jeff Kinney and Jack Mildren.

The game came on Thanksgiving 50 years ago and it is back in the spotlight this week as Nebraska and Oklahoma renew their rivalry with an anniversary game, the two Big Eight rivals long since severed by conference realignment. Below is one of several game stories provided by The Associated Press back in 1971 and how it appeared in The Paducah (Ky.) Sun on Friday, Nov 26, 1971.

Nixon asked about the game and Devaney replied: “Yes, sir, they sold a lot of popcorn today. Nobody left.”

Nixon also asked about Nebraska’s Jan. 1 Orange Bowl game with third-ranked Alabama. Devaney told the President that “Alabama is a fine team, but I don’t think our boys are looking past Hawaii next week.”

Devaney said he told his team at halftime, when Oklahoma led 17-14, to “run the football right at ‘em in the second half.”

Jeff Kinney, the Cornhuskers’ all-Big Eight Conference I-back, did exactly that, and scored three of his four touchdowns, including the clincher with 1:38 remaining, to bring the Cornhuskers their victory and the Big Eight championship.

Kinney was the game’s big yardage collector in this stirring struggle between the nation’s No. 1 defense, Nebraska, and the No. 1 offense, Oklahoma.

“It was the greatest victory of my career,” said Devaney, whose team fell behind for the first time this season just before the half ended and again with 7 ½ minutes remaining. “I thought we could come back in the fourth quarter, but I was hoping we wouldn’t score too quickly.”

Oklahoma coach Chuck Fairbanks was obviously disappointed over the Sooners’ first loss in 10 games, but insisted he was “not disappointed at all in our football team.

“They played their hearts out, but came up short. They have no reason to hang their heads. Bob Devaney and the Cornhuskers are true champions.”

Nebraska stormed 74 yards on 12 plays for the winning touchdown, with Kinney picking up big chunks of yardage. Kinney carried the last four times for 15 yards, including the final two-yard burst over left tackle for the touchdown.

The victory, Nebraska’s 21st in succession, ran its 1971 record to 11-0 and extended its string of games without defeat to 30.

A capacity crowd of 61,826 and a national television audience watched the Cornhuskers fall behind not once but twice Thursday before they came back on Kinney’s fierce charges through the leaky Oklahoma defense.

During the winning drive, Kinney carried the last four times in succession and made 15 yards, the last two for the touchdown. Earlier in the drive, Kinney had carried three times for 44 yards.

Kinney’s earlier touchdowns came on runs of 1, 3, and 1 yard. Johnny Rodgers, the Cornhuskers’ fleet receiver, made the other Nebraska score in the game’s opening moments with a sensational 72-yard punt return.

Six minutes before Nebraska got the clincher, the Cornhuskers only mistake of the game had put Oklahoma ahead 31-28. After Lucious Selmon recovered Jerry Tagge’s fumble on the Oklahoma 21, the Sooners drove 69 yards in 12 plays with Mildren hitting Jon Harrison for the final 17 yards that put Sugar Bowl-bound Oklahoma out front for the second time.

The Sooners spotted Nebraska a 14-3 lead in the early moments of the second quarter and went ahead for the first time on a 76-yard, four-play burst in 46 seconds with time running out in the first half.

Mildren ran for five on the keeper and Joe Wylie slammed off left tackle for a first down at the 3. Mildren, eyeing the clock, hit Harrison with a43-yard strike that put the ball on Nebraska’s 24.

Mildren faded just behind the scrimmage line on the next play and found Harrison again, the split end grabbing the ball just inside the 5 and racing over.

Oklahoma drove 80 yards on 13 plays with Mildren slamming through the left side from the 3 immediately after Nebraska had taken a 10-point lead. Leon Crosswhite and Mildren got 78 of the 80 yards.

The Cornhuskers, after Rodgers had staked them to a 7-0 lead, made their first drive late in the first quarter when Jim Anderson forced Greg Pruitt’s fumble after a jarring tackle by Joe Blahack on the Nebraska 46. Twelve plays later, Kinney dived over the goal from the 1. Between the two Nebraska touchdowns, John Carroll kicked a 32-yard field goal.

Football experts predicted before the game that the Sooners, a one-point underdog in this top college contest of the year, could conquer the Cornhuskers if they overcame their biggest weakness – fumbling.

Oklahoma lost three fumbles and the proud Cornhuskers wasted no time driving for touchdowns after two of them.

Oklahoma’s defense, another questionable factor, was magnificent in the first half, holding Nebraska’s vaunted running game to 67 yards.

After the intermission, Kinney began to find the range and the Cornhuskers finished with 297 yards on the ground. Oklahoma’s explosive wishbone offense, the best in the nation going into the game, gained 279 yards rushing and Mildren completed six of 11 passes for 188 yards against the nation’s No. 1 defense.